A Turkish police operation exposed how the Islamic State can still run cross-border money transfer networks despite its defeat in Syria and Iraq. 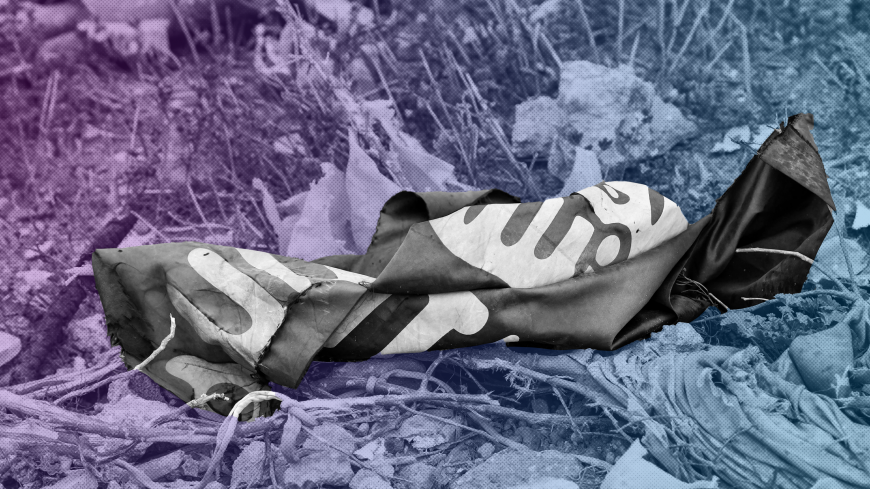 A discarded Islamic State flag lies on the ground in the village of Baghouz, Syria, March 24, 2019. - GIUSEPPE CACACE/AFP/Getty Images

Turkey’s Middle Eastern borders have always been porous and prone to smuggling and clandestine crossings. After the Syrian turmoil broke out in 2011, long-standing smuggling routes became supply channels for armed rebels, including the Islamic State (IS). Having lost control on the ground, IS may be unable to use the smuggling routes as before, but its cross-border dealings are far from over.

IS members, it turns out, have resorted to traditional methods of money transfer via exchange offices and jewelry companies they have set up in Syria and Turkey, called al-Haram, al-Hebo, al-Khalidi and Saksouk. On Sept. 19, the Turkish police detained 22 suspects accused of running transnational money-transfer networks for IS in simultaneous raids on 37 locations in eight provinces across the country.

The police operation, which focused on al-Haram in particular, followed the US Treasury’s Sept. 10 announcement of counterterrorism sanctions on al-Haram, al-Khalidi, al-Hebo, Saksouk and individuals associated with those entities.

Al-Haram was set up as a company dealing in foreign exchange, trade and transport. It has opened branches in big Turkish cities such as Istanbul, Mersin, Gaziantep, Bursa, Sanliurfa, Antalya, Ankara, Izmir, Konya and Kayseri, as well as five districts in Hatay province, which borders Syria. The company has affiliates in Jordan, Lebanon, the Palestinian territories and Sudan.

Al-Hebo company, based in the Turkish cities of Gaziantep and Sanliurfa, has been active in the town of Tell Abyad, just across the border, and Raqqa, the former IS stronghold in Syria, as well as in Lebanon.

Al-Khalidi has offices in Mersin, Sanliurfa, Gaziantep, Bursa, Adana and Istanbul, including at the historical Grand Bazaar. The company has affiliates in Raqqa, Deir ez-Zor and Mayadin in Syria as well as in Erbil, the capital of Iraqi Kurdistan.

According to leaks from the police investigation published in Turkish media outlets, IS financiers have made swift money transfers to IS members, mostly in Syria, via front companies and exchange offices, using a computer program called “al-Haram” and passwords it creates on a daily basis. The transfers are conducted without the money actually moving, but the companies on the two sides settle accounts at regular intervals after multiple transfers. This is done through couriers who transport money illegally. Al-Haram is said to be used in 44 countries.

The method appears to have been developed in response to tightened security measures at borders and enhanced scrutiny over bank transactions.

Al-Monitor spoke with a former jeweler who has worked as a “field adviser” to humanitarian relief organizations at the Syrian border. He knows well how the money networks work, and said the transfer method used by IS and other armed groups is based on the traditional “hawala” method, long used by traders and smugglers. “The method has been widely utilized to escape the restrictions of the banking system, scrutiny and higher fees. It is based on trust,” the source told Al-Monitor.

“Let’s say you have merchandise brought in from Syria," he said. "You need to send the payment. An exchange office or company at the Grand Bazaar in Istanbul would have an affiliate or a business partner in Syria. You give the money to the company in Istanbul and the company informs its counterpart in Syria, and the recipient then collects his money there. Small commissions of 2-3% are being cut.”

Debt between hawala dealers can be settled in various ways, the source said, explaining that the party who is owed money might ask for a cash transfer or, if convenient, request that the money be given to a third party to which it owes money. “This is a well-established system," he said. "It is like clockwork.”

After the Syrian crisis erupted, armed groups “used to move bagfuls of money across the border before they discovered the hawala system,” the source said. “In fact, international relief organizations used the same method. I witnessed such transfers several times at the Cilvegozu border crossing.”

According to the source, “The eyes watching the border have multiplied in recent years. The intelligence services are well aware of what is going on and are watching closely.” Stricter bank regulations and increased scrutiny by Turkey's Financial Crimes Investigation Board (MASAK) have also contributed to the resurgence of the hawala method, he noted.

As a result, commission rates have shot up to 20%, according to the source. He explained, “Traders used to pay [commissions of] 2% in the past. They would either pay for merchandise they bought or collect the payment of merchandise they sold. They were evading taxes and control, in addition to saving time. No doubt, there was also money laundering involved. The money of groups such as IS, however, is easy money. Hence, 20% cuts are not a problem for them.”

Asked why IS would set up its own companies, the source said, “Working with such groups is a huge risk for traditional hawala dealers. They know they cannot evade the intelligence services. Still, there are many money grubbers out there trained [in the hawala system] and they easily hook up with the [armed] groups. But dealing with groups such as IS remains very dangerous for them as well, so IS might have opted to set up its own networks to avoid being uncovered.”

Under Turkish law, entities other than banks are banned from wiring money.

Turkey adopted a law in 2013 in line with the provisions of the UN Convention on the Suppression of Financing of Terrorism, which led to tighter controls by MASAK. Public banks, which have been active in the trade with Syria, began to notify MASAK of all their transactions as well. Scrutiny over bank transactions in border regions has increased since 2014 amid international pressure on Turkey.

The measures, however, appear to have failed to completely stop IS associates from using the Turkish banking system. For instance, in February 2016, Washington reportedly issued warnings to three Turkish banks for allowing people linked to individuals on the UN sanctions list to open accounts and transfer money.

That the Turkish police operation against al-Haram came only after Washington’s designations casts further doubt on whether control mechanisms are functioning properly.

Meanwhile, Turkey’s state-run postal service, PTT, has opened branches that offer money transfer services in areas that came under Turkish control in the Euphrates Shield and Olive Branch operations in northern Syria. Officials say the PTT offices are used to pay the salaries of Turks serving in those areas and local police sponsored by Ankara as well as for money transfers by ordinary Syrians.