A leaked report has revealed details about how the jihadi group used Turkey to traffic money and obtain supplies. 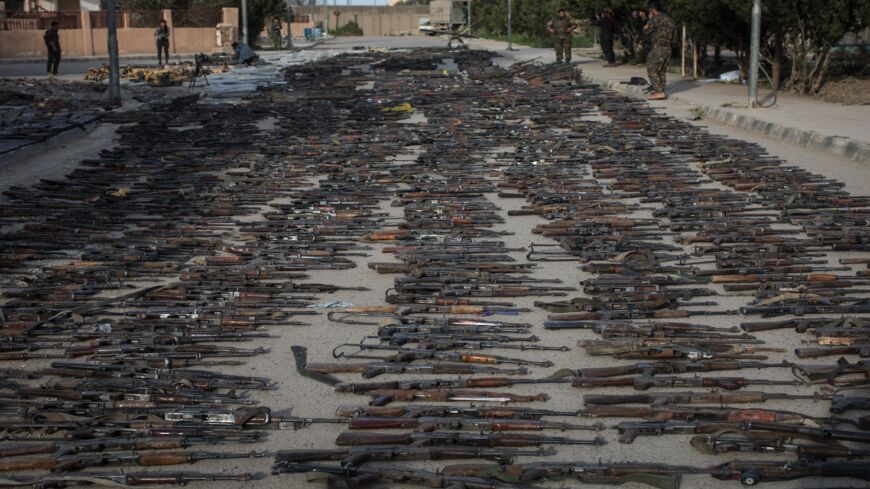 Seized Islamic State weapons that were found in the last stronghold of the extremist group are displayed at an SDF base on March 22, 2019, outside Al Mayadin, Syria. - Chris McGrath/Getty Images

Shortly after the Islamic State’s (IS's) leader was killed in a Syrian hideout near the Turkish border, a leaked report by Turkey’s Financial Crimes Investigation Board (MASAK) revealed details about how the jihadi group used the country to traffic money and obtain supplies, including drone parts.

The March 8, 2021, report by the MASAK, a body attached to Turkey’s Treasury and Finance Ministry, indicates that IS members acquired equipment and parts to make drones and improvised explosive devices with the help of companies set up in Turkey, and used exchange offices, jewelry shops, post offices and banks to transfer money. Furthermore, it reveals that some IS-linked individuals investigated by the MASAK have acquired Turkish citizenship.

The 279-page document, obtained by Al-Monitor, was first reported by journalist Bahadir Ozgur in the daily BirGun last week and has since made it to parliament’s agenda.

The most striking details pertain to the activities of three companies set up by the Aleppo-born Ibrahim Hag Gneid in Turkey’s southern province of Mersin in 2014 and 2016. The companies — Altun Inci, Mavi Yelken and Elfarah — were registered as businesses dealing in construction materials, industrial supplies and hardware.

According to information sent to the MASAK by the directorate-general of the police on Nov. 1, 2017, Altun Inci procured equipment and parts for drones and improvised explosive devices worth millions of dollars from 2015 through 2016. The authors of the report opine that Gneid’s motivation was material but he was aware the supplies were destined for IS.

Gneid was business partners with Mustafa Ghassan Naway and Safi Naway, both Syrians who have settled in Mersin and acquired Turkish citizenship.

According to the report, Abu Naeema al-Turkistani, a Chinese national of Uighur origin involved in Altun Inci’s procurement chain, ordered materials used in weapons-making worth some $85,000 from a China-based company in 2015. Turkistani and his wife, Minawaer Maitituersun, belonged to an IS unit in charge of making chemical weapons.

According to the report, Sajid Farooq Babar, a Pakistani national known as Abu Muaz Pakistani, also supplied IS with large amounts of materials via Altun Inci and Mavi Yelken before being killed in a US strike in 2017.

The Pentagon said at the time that Babar and two fellow IS members responsible for modifying commercially produced drones were killed in successive strikes near Mayadin, Syria, in September 2017, which targeted also a research lab. A US military official described the three men as “highly skilled” militants whose removal would degrade IS’ ability “to modify and employ drone platforms as reconnaissance and direct-fire weapons on the battlefield.”

According to information obtained by Ozgur, the BirGun journalist, two Turks bearing the same surname became partners in Altun Inci after Gneid’s departure. Elfarah, meanwhile, is currently owned by Cafer Ibrahim, a Syrian who acquired Turkish citizenship in 2017 and resides in Istanbul. Ozgur reports that Naway Group, a company owned by Altun Inci partner Mustafa Naway, was a key link in the network. The company, which was founded in Aleppo and opened an office in China in 2011, is still involved in e-commerce.

Gneid received Turkish citizenship under a Cabinet decision of May 29, 2017. In 2019, prosecutors in Mersin investigated him on suspicion of belonging to a terrorist group and, even though intelligence reports described him as an IS member, the probe ended with a nonprosecution decision. Writing to the MASAK in February 2021, the police reiterated that Altun Inci procured multimillion-dollar drones and explosive materials on behalf of IS.

The report cites also a Lebanese link: Fayez Alfliti, a Turkish citizen of Lebanese origin. According to information relayed by the police to the MASAK on Jan. 22, 2020, Alfliti made contact with IS after crossing to Syria from Turkey and supplied the group with Lebanese-made detonating cords in 2015. In return, a payment of $400,000 was sent with smugglers from Raqqa, then an IS stronghold in Syria, to the southern Turkish city of Gaziantep before the money was transferred to Lebanon.

The report indicates that Turkish members of the group were actively involved in IS efforts to raise money to help the escape of fellow militants and their relatives from al-Hol camp in northern Syria, which is controlled by the Kurdish-led Syrian Democratic Forces. On Sept. 30, 2020, the police informed the MASAK that Abdi Yildirim, who was captured in December that year, and Selami Boztepe raised money in Ankara, Antalya and Konya to “rescue” female members of the group held in camps in Syria.

In another finding, the MASAK established that Abuliezi Abduhamiti, hailing from China’s Xinjiang region and described as a key IS financial operative by US authorities, was linked to Abdulkadir Masharipov, the Uzbek assailant convicted of gunning down 39 people in an Istanbul nightclub just minutes into New Year's Day in 2017, and had a role in money trafficking linked to a network in Britain.

Standing out on the financial leg is also Ahmed El Ahmed El Harun, a Syrian from Deir ez-Zor, known also as Uday Ali Saad Khalifa Al Salmani, who joined IS in Iraq along with his brothers. According to the report, he was in charge of financing the transfer of arms and militants. As part of his mission, he ran jewelry shops, transferred funds using the informal hawala system, provided money to pay the salaries of IS members in Iraq, spent time in Turkey to take care of logistical issues, organized illegal border crossings and set up a solidarity fund for IS members.

The report shows that IS activities have extended to Turkish regions that have rarely been on the radar, unlike provinces such as Istanbul, Ankara, Konya, Sanliurfa and Bursa. For instance, a native of Deir ez-Zor named Yusuf El Ali El Hasan collected money from Syrians in the Black Sea province of Trabzon. He sent the money to contacts in Ankara and Sanliurfa, named respectively as Abdurrahman Abdulkareem, also from Deir ez-Zor, and Ali El Ali. The pair then transferred the money to the El Hafiz company in Syria.

The report mentions numerous individuals linked to the currency exchange companies Saksouk and Al Haram, which are at the center of the money transfer chain. Among them is Aleppo-born Hasan Krayem, the owner of a jewelry business in Turkey, called Talbe Kuyumculuk, who, the report shows, has become a Turkish citizen.

According to information the police relayed to the MASAK on Sept. 23, 2020, Suat Ozdemir from Elazig, eastern Turkey, collected 1.7 million Turkish liras for the release of about 200 IS-related women and children held in Syria. In two separate instances in November 2018 and September 2020, the police informed the board that Tahsin Elhalaf, a Syrian residing in the southern Turkish province of Kahramanmaras, was involved in IS money transfers between Turkey and Syria.

Other information from the police, dated April 3, 2018, details a police raid on the El Hadi jewelry shop in Istanbul, owned by Halid Habu, a Syrian, on March 16, 2018. The police seized large sums of money believed to be used in IS-linked transfers, including more than $1.2 million, nearly 129,000 euros, some 1.8 million Turkish liras, nearly 47,000 Emirati dirhams and 2 million Syrian pounds.

The report shows that some IS sympathizers such as Suleyman Soltamuradov and Rukman Mazashev who raised money for Gayratjon Mirzotokhirovich, an IS financial operative known as Abdurakhmon Uzbeki, have also acquired Turkish citizenships.

The report mentions also a Somali man, Abdifatah Abdullahi Mohamed, who belongs to the Somalia-based jihadi group Al-Shabaab, according to information the MASAK received from Turkey’s National Intelligence Organization on Feb. 4, 2021. Prosecutors in Istanbul investigated Mohamed on suspicion of membership in a terrorist group in 2020, but that probe too ended in nonprosecution.

The report includes curious tables on the identities of the individuals investigated by the MASAK. A column titled “TCKN” — the Turkish acronym for “Republic of Turkey Identity Number” — lists 11-digit numbers starting with the number 9. In the “citizenship” column, many are marked as citizens of Turkey. The tables might mislead the reader to conclude that all IS-linked individuals mentioned in the report are Turkish citizens, even though the report’s only open reference to the acquisition of Turkish citizenship pertains to Gneid. Back in 2017, following allegations that Ankara would allow Syrian refugees to vote, officials explained that identity numbers starting with 9 have been assigned to foreign nationals and do not denote citizenship. The identity numbers of several individuals other than Gneid do not start with 9.

Alpay Antmen, a lawmaker for the main opposition Republican People’s Party, submitted a parliamentary question to the interior minister last week, asking why the police were not acting against the individuals cited in the report and how many IS-linked people have acquired Turkish citizenship. Antmen told Al-Monitor he has yet to receive a reply.