IS designates Turkey as its next base

The Islamic State has selected Turkey as its next base to reorganize, recruit and plan. 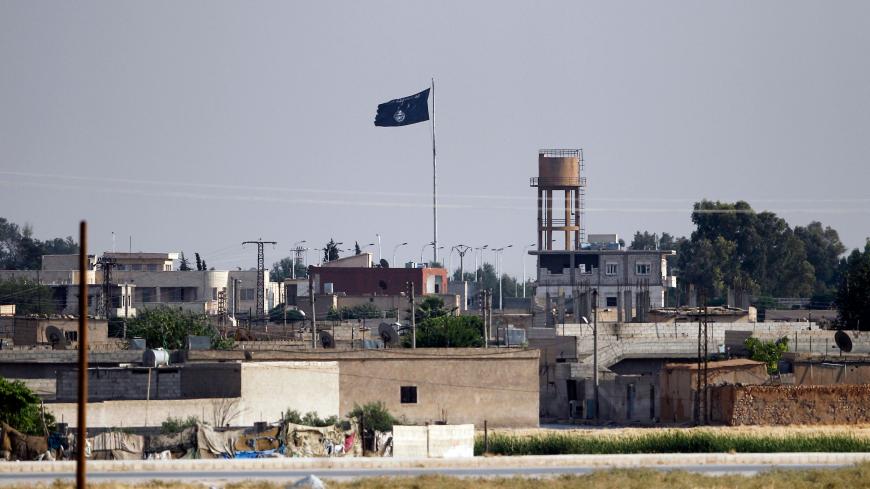 An Islamic State flag flies in the northern Syrian town of Tell Abyad, seen from the across the border in Akcakale, Turkey, June 15, 2015. - Gokhan Sahin/Getty Images

Turkey — the logistics lifeline of jihadi movements in Iraq and Syria — has failed to clear its own backyard of jihadi threats. There are credible indications that the Islamic State (IS), after losing its territorial dominance in Iraq and Syria, has designated Turkey as its next reorganization base.

The killings of IS leader Abu Bakr al-Baghdadi and his spokesman Abu al-Hassan al-Muhajir so close to the Turkish border were clear signs that IS' next destination was Turkey. There are, of course, other pertinent developments.

The arrests of so many IS members by Turkish security forces are another sign of IS' intention to create cells in the country.

Iraqi intelligence sources have provided solid information that the brains of IS have moved to Turkey. The United States has tracked the jewelry shops and foreign currency exchanges used by IS in money transfers. The US Treasury Department on Sept. 10 placed al-Haram, al-Hebo, al-Khalidi and Saksouk foreign exchange bureaus and jewelry outlets on its sanctions list for transferring money for IS.

Turkish security units were then compelled to take action. They raided 37 addresses and detained 22 people Sept. 19. The operation revealed that IS operatives in Syria and Turkey used a computer program called al-Haram for money transfers. Turkish security determined that these companies were operating in the Turkish provinces of Istanbul, Ankara, Gaziantep, Adana, Mersin, Hatay, Sanliurfa, Antalya, Ankara, Izmir, Kayseri and Konya.

Turkey usually keeps a close watch over foreign exchange bureaus, so it was hard to believe that it missed such a developed network. The US Treasury’s update of its sanctions list with new companies and people meant Turkey once again lagged behind the United States. In addition to the Turkey-based Sahloul and al-Sultan foreign exchange companies, the United States put ACL and Ithalat-Ihracat on its blacklist Nov. 18 for providing IS financial and technological support.

Sahloul was said to have served as the intermediary for money transfers of IS militants in Iraq and Syria. Last summer, al-Sultan was also identified as an intermediary in IS operations. The Sanliurfa-based ACL provided IS financial, technical and equipment support between 2015-2018. The founders of that company, Ismail Bayaltun and his brother Ahmet Bayaltun, were placed on the sanctions list.

If there is financial activity, then the presence of cells is inevitable. The latest flash comment on that topic came from Iraq’s military intelligence chief, Lt. Gen. Saad al-Allaq. Speaking to CNN, Allaq said that nine senior IS commanders had fled to Turkey and that Iraq had shared its files on them with Turkish security. Allaq, who works closely with the CIA, said IS senior personnel and bomb makers Khair-Allah Abdullah Fathi and Hussein al-Jumaili bribed smugglers in areas controlled by the Syrian Democratic Forces to secretly enter Gaziantep in Turkey.

Allaq said that Iraq had learned from IS correspondence that IS operatives were hatching a plan to liberate their comrades in prisons in Iraq and Syria. Allaq said that the IS seniors in possession of substantial amounts of cash were setting up new cells in Turkey and recruiting militants. The ongoing cooperation between Iraqi and Turkish intelligence services was seen in February 2018, when Turkey apprehended Ismail al-Ethawi, the man behind IS money operations, and sent him to Baghdad.

Iraq had informed Turkey that Ethawi had escaped to Turkey in 2017. Turkey caught Ethawi in the northwestern Turkish province of Sakarya after two months of pursuit. The information Ethawi provided made it easier for the Americans to determine the hiding place of Abu Bakr al-Baghdadi.

It is known that the CIA interrogated Ethawi. By accessing the Telegram account on Ethawi’s cellphone, the Iraqis were able to capture several IS members who were responsible for IS money transfer and field operations.

For those managing IS' money, Turkey is a meaningful choice for a base.

It's open to debate how much capacity Turkey has to mobilize against IS, and whether this is sufficient to cope with the threat. Turkey’s security and intelligence services have been dedicating the bulk of their capabilities to eradicating the Gulen movement and to suppressing domestic opposition, as led by the Kurds. Of course, the government totally dismisses any criticisms that it's weak in combating IS.

Yet the increased number of detentions of IS suspects does not alter the reality of IS designating Turkey as a base for operations. To the contrary, the high number of suspects apprehended gives the impression that IS has chosen Turkey as a base to hide, reorganize and then to move on to other countries.

Nevertheless, haphazard policies and flawed legal processes enable IS members to escape, hide and move as they want in Turkey. IS has further obtained more room to maneuver due to Operation Peace Spring and the subsequent deterioration of stability east of the Euphrates. The Pentagon’s latest report acknowledges this reality.

According to the US Defense Intelligence Agency, IS found the opportunity to restructure after the latest Turkish intervention. The following comment in the report is important: IS "used the drawdown of US troops from Syria and the Turkish incursion to regroup and strengthen its abilities to plan terror attacks abroad.”

The regrouping of IS cells in Turkey poses a threat to the entire world. Ankara is aware that its mistakes in combating IS pose a danger. ​There are several shortcomings in Ankara's handling of the matter. Placing IS suspects in repatriation centers and deporting them may well backfire on Turkey.