US raid raises questions on Turkey’s commitment vs. Islamic State

The Islamic State leader’s hideout a stone’s throw away from Turkey's border and Syrian Democratic Forces involvement in the raid have raised fresh questions over Ankara’s fight against the Islamic State. 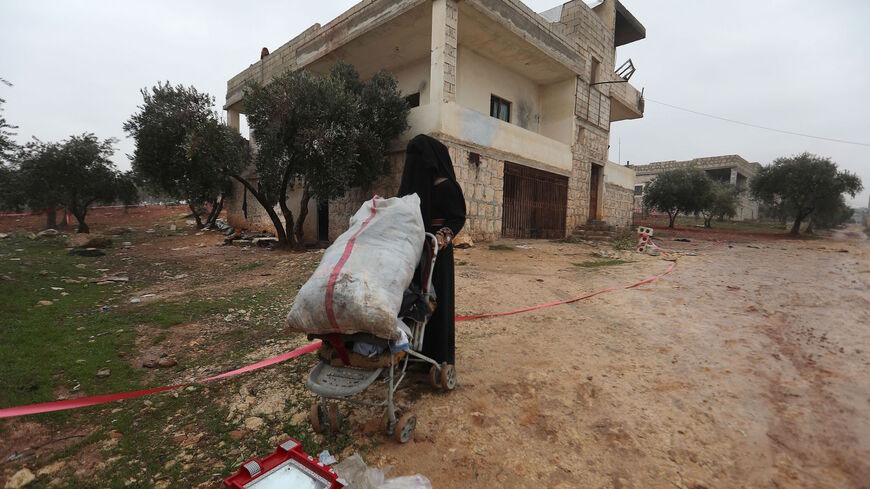 A fully veiled woman collects items near the house in which the leader of Islamic State leader Abu Ibrahim al-Hashimi al-Qurashi died during a raid by US special forces, in the town of Atme in Syria's northwestern province of Idlib, on Feb. 4, 2022. - AAREF WATAD/AFP via Getty Images

The leader of the Islamic State, Abu Ibrahim al-Hashimi al-Qurayshi, was killed in a Syrian hideout close to the Turkish border, just like his predecessor Abu Bakr al-Baghdadi, casting doubt over Ankara’s assertions of its decisive struggle against the radical group.

Like his predecessor, al-Qurayshi was hiding in a house near the northern Syrian town of Atmeh, a stone’s throw from the border across the Turkish province of Hatay and only a few hundred meters from Turkey’s Bukulmez military outpost, which overlooks the region. Washington’s underscoring of the Syrian Democratic Force’s role in the raid came atop, dealing another blow to Ankara.

Al-Qurayshi, whose real name was Abdullah Amir Mohammed Saeed al-Mawla and who went by several other aliases, was killed near northwestern Syrian village Barisha some 25 kilometers (15 miles) away from the Turkish border. Similarly, his predecessor Abu Bakr al-Baghdadi had also been killed in Barisha in 2019.

The three-story house where al-Qurayshi was hiding is located one kilometer from a checkpoint of Failaq al-Sham, a Turkish-backed Syrian opposition group, and some 500 meters from a Hayat Tahrir al-Sham (HTS) checkpoint. HTS is the dominant group that controls Idlib and surrounding regions including Atmeh.

Atmeh, which is home to a large refugee camp for displaced Syrians, has become a place where jihadis from groups such as al-Qaeda and IS can easily hide. Although the region remains out of the Turkish-backed groups' control, Atme and nearby villages can be easily monitored from the military watchtower at Bukulmez outpost.

Given the intelligence leaks that suggest al-Qurayshi was also relying on a web of couriers to lead the group like his predecessor, Turkey’s failure to identify the suspicious mobility in the region is raising further questions.

The US strike came after the IS raid on a prison in Hasakah. Increasing Turkish strikes on SDF checkpoints at the time of the raid likely smoothed the path for the attackers. Turkey has been keeping Tell Tamr, Ain Issa, Kobani east of Euphrates and Manbij and Tel Rifat west of Euphrates under constant fire through howitzers and combat drones. This, in turn, provides ammunition to those who claim that Turkey is opening a path for the IS.

In addition to the location of the al-Qurayshi's hideout, the SDF’s involvement in the latest raid puts Ankara into an even more untenable position. In a briefing after the strike, US President Joe Biden said ​​the raid was “aided by the essential partnership of the Syrian Democratic Forces.”

Riding the momentum, the SDF didn’t miss the opportunity to taunt Turkey. “Is there any doubt that Turkey [has] turned areas [of northern] Syria into a safe haven for Daesh leaders?” Farhad Shami, a SDF press person, wrote on Twitter, using the Arabic acronym of the Islamic State. Shami also reminded readers that Baghdadi had been killed in the same area. Mazlum Kobane, the commander in chief of SDF, said al-Qurayshi was killed thanks to the “strong partnership” between the US and SDF.

In short, instead of its NATO ally Turkey, the US joined forces with the SDF to hunt down a prominent IS target near the Turkish border. The location of al-Qurayshi’s hideout shows once again that IS leaders hide in places from where they can easily make use of the Turkish borders. Al-Qurayshi’s ethnic origins remain unknown, but some say he was an ethnic Turkmen who had little difficulty establishing ties within Turkey.

It's no secret that the IS considered Turkey a place where its militants could take shelter in relative ease during its withdrawal from Iraq and Syria. According to Kasim Guler, the alleged IS leader for Turkey whose confessions to the Turkish authorities were leaked to the media last week, Baghdadi had made a decision to use Turkey as a major base.

Guler, who was caught in June 2021 near the Syrian border, told the authorities that under that plan, dubbed “the mountain project,” the militant group was going to base in the outskirts of four different Turkish provinces including Hatay along the border, according to an exclusive report by German broadcaster Deutsche Welle. The bases would train new militants joining the Islamic State from Europe. Guler said that they had smuggled AK-47s, RPG launchers, and other weapons​​ from the Syrian town of al-Bab to Turkey and buried them in six Turkish cities, including Istanbul and Izmir, according to the DW report.

IS recruiter Mustafa Dokumaci’s attempts to realize the project were foiled after the arrest of the ranking IS militants responsible for the plan. The group relied on senior IS figure Mahmut Ozden for communications between the Turkey-based IS cells, the DW reported, citing Guler’s testimony. Guler said the group had cells in more than a dozen Turkish cities including Istanbul and Ankara. Guler also recounted some plots to assassinate prominent politicians including Turkey’s main opposition leader, Kemal Kilicdaroglu, and Istanbul Mayor Ekrem Imamoglu.

The major reason why IS militants prefer to take shelter in Turkey is that the Turkish government has considered Islamic State a useful tool in its fight against the Syrian Kurdish groups. Accordingly, Ankara’s policies against the radical group have become riddled with inconsistencies.

IS militants can easily wire funds using exchange offices and jewelry shops in Turkey. The Turkish judiciary’s weakness in dealing with Islamic State suspects is another reason. Islamic State suspects caught in Turkey cannot be tried on crimes they committed abroad. Some IS suspects have been released on probation or on grounds of lack of evidence.

They appear to travel to and from Syria and Iraq easily, even smuggling their captives. Turkish police’s rescue of a 7-year-old Yazidi girl whom the Islamic State had sought to sell in an online auction as a captive in Turkey last year is a case in point.

Turkey’s fight against Islamic State has always been haphazard. The fact that al-Qurayshi could shelter near the Turkish border has only amplified the depth of these holes.