Islamic State leader killed in overnight US raid in Syria 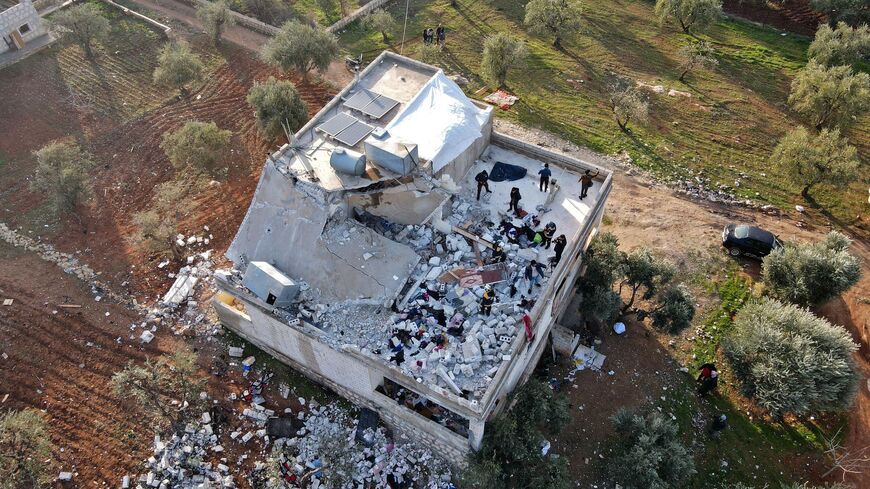 A general view on Feb. 3, 2022, shows the scene following an overnight raid by US special operations forces against suspected jihadists in Atmeh, in Syria's northwestern province of Idlib, that left at least nine people dead, including three civilians. - AAREF WATAD/AFP via Getty Images

The leader of the Islamic State group blew himself up during an overnight raid by US special operations forces in northwest Syria, President Joe Biden said this morning.

Abu Ibrahim al-Hashimi al-Qurayshi and several civilians were killed during a pre-dawn raid at a house in Atmeh, in rebel-held Idlib province, just minutes away from the Turkish border.

“Last night at my direction, US military forces successfully undertook a counterterrorism operation,” Biden said in a statement Thursday morning. “Thanks to the bravery of our armed forces, we have removed from the battlefield Abu Ibrahim al-Hashimi al-Qurayshi, the leader of ISIS.”

Al-Qurayshi, also known as Hajji Abdullah, took command the IS jihadist group following the death of Abu Bakr al-Baghdadi during a similar US special forces raid just an hour's drive away in October 2019.

The Syrian White Helmets, a volunteer rescue organization operating in rebel-held areas, said Thursday its workers had recovered 13 bodies from the site so far, including six children and four women.

Senior administration officials speaking to reporters on the condition of anonymity today downplayed US responsibility for the deaths. "All casualties at the site were due to the acts of ISIS terrorists inside the residence," one official said.

“I directed the Department of Defense to take every precaution possible to minimize civilian casualties,” President Biden said in a speech Thursday morning.

Months of rehearsals culminated in US operators kicking off the raid after midnight on Thursday after President Biden green-lit the operation earlier this week, officials said. Once on-site, US forces repeatedly called via loudspeaker for men, women and children to exit the building, a witness said.

"As our troops approached to capture the terrorist, in a final act of desperate cowardice... he chose to blow himself up," Biden said in his speech.

"He did not fight back," Kirby told reporters.

The Pentagon touted the operation as a success in a statement released shortly after midnight on Thursday, but not all went according to plan.

The original objective was to capture the IS leader alive, the head of US forces in the Middle East, Gen. Kenneth "Frank" McKenzie, said during an event at the Middle East Institute today.

Following the blast, US forces came under fire from the second floor of the building, where a man – whom officials described as a lieutenant to Hajji Abdullah – and his wife had barricaded themselves along with at least four children. Pentagon officials said the two adults shot at US forces, who then returned fire.

The couple and one child were later found dead on the second floor, McKenzie said today. Four other children, including an infant, were safely removed from that apartment by the special operators, the commander said. Six others – a man, a woman, and four children – exited the ground floor safely during the raid, according to Kirby.

Towards the end of the operation, a US helicopter was targeted with gunfire from the ground by personnel thought to be affiliated with Hayat Tahrir al-Sham (HTS), the local Al-Qaeda offshoot that controls the area. Again, US troops returned fire, killing at least two of the fighters, officials said.

After departing the compound, American operators were forced to scuttle one of their own helicopters due to a mechanical failure which Kirby described as "a drivetrain issue." The crew landed the helicopter safely and US troops destroyed it to prevent sensitive equipment from being recovered from the wreckage. Officials said earlier today that they did not attribute the problem to hostile activity.

US officials assess Hajji Abdullah's death to be a "significant blow" to IS' already crippled capabilities, Kirby said today. The group today consists mainly of underground sleeper cells across rural parts of Iraq and Syria, a feeble remnant of the proto-state it once controlled.

Still, officials cautioned the fight against the jihadist group is not finished.

"Whoever IS names [as its leader] after Hajji Abdullah, he's sure to meet the same fate," Brett McGurk, the top White House official overseeing Middle East policy, said during an appearance on CNN today.

Today's operation came two weeks after the Islamic State launched a major prison break with at least one car bomb and more than a hundred fighters in northeast Syria, which is under the control of a Kurdish-led alliance of local multiethnic militias backed by the US military.

Biden on Thursday said Hajji Abdullah was behind last month’s assault on the Sinaa prison in Hasakah, which led to a battle that left hundreds dead and took more than a week to contain.

"He certainly had knowledge of – and was at least was maintaining situational awareness during – the prison break on Hasakah last week," Kirby said today.

It remains unclear how many IS prisoners escaped, though the facility held as many as 5,000 suspected jihadists.

McKenzie credited the Kurdish-led SDF with making "invaluable" contributions that enabled the raid, but no SDF personnel were present for the mission.

Asked why the operation wasn't launched earlier, Kirby cited "meticulous" preparations aimed at ensuring the IS leader was actually present at the site.

"There were a lot of factors that have to line up just right. You have to make sure your intelligence is solid," he said.