IS launched its deadliest attack in years just two weeks before Abdullah Qardash was killed during a US special forces raid in Syria. 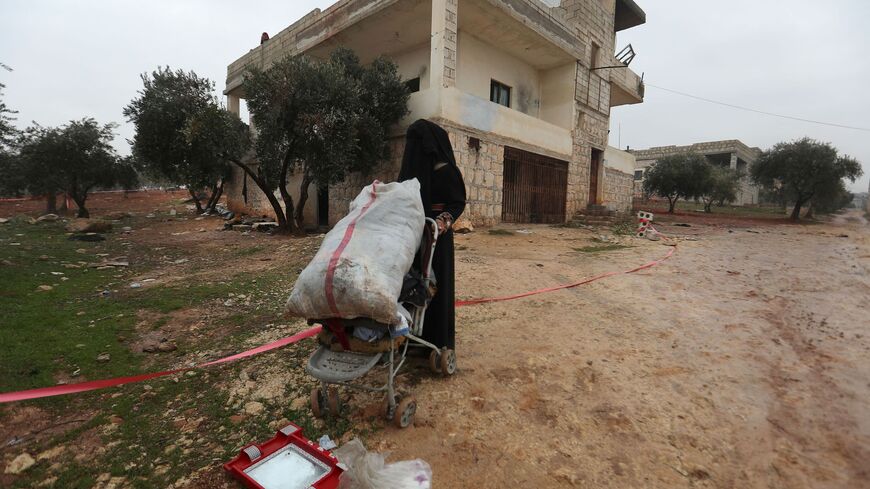 A fully veiled woman collects items near the house in which the leader of Islamic State leader Abu Ibrahim al-Hashimi al-Qurayshi died during a raid by US special forces in Syria's northwestern province of Idlib, on Feb, 4, 2022. - AAREF WATAD/AFP via Getty Images

Qurayshi is the second IS leader to die by suicide when faced with the prospect of capture by the US military in just over two years.

The Biden administration has been touting the operation as a success, but the fight against the world’s most notorious jihadi group is not over. Here are three key takeaways from the leader’s death:

The Pentagon is calling this a setback for IS’s attempts to reconstitute.

Qurayshi was more of a hands-on leader than his predecessor, Abu Bakr al-Baghdadi, and was trying to restore IS’s ability to stage major attacks, US officials have said.

“This is not something we believe ISIS is going to be able to get over really quickly and really easily,” Kirby said.

Just two weeks before Qurayshi’s death, IS launched its deadliest attack in years.

More than a hundred fighters and at least one vehicle bomb — once a choice weapon of the organization — blew a hole in the wall of the largest IS prison in northeast Syria, a region under the control of the Syrian Democratic Forces (SDF), a Kurdish-led militia alliance backed by some 900 US special operations troops.

The fighting left almost 500 people dead — mostly jihadis — and Islamic State fighters took over a neighborhood in a Syrian city for the first time since being defeated on the battlefield in 2019. US airstrikes were unleashed to help the SDF beat back the outbreak.

The multinational coalition has tried to put a positive spin on the jailbreak. A senior coalition official, US Army Brig. Gen. Isaac Peltier, called it “a huge ISIS failure that ultimately sped up the clock to ensuring that the detainees are in a hardened facility from which they will never escape.”

Still, the coalition has not released an estimate of how many may have gotten loose. And although President Joe Biden said Hajji Abdullah was behind the incident, his precise role remains unclear.

Defense Secretary Lloyd Austin said in a statement that al-Qurayshi provided “near-constant operational guidance” to the the attackers.

“He certainly had knowledge of — and was at least was maintaining situational awareness during — the prison break on Hasakah last week,” Kirby told reporters following the raid.

“This is a group that wants to reconstitute its strength, that wants to attack and maim and kill and terrorize, and Hajji Abdullah was very much involved in trying to resuscitate the group and grow their capabilities,” Kirby said.

Qurayshi’s death will likely erode IS morale, but it’s not clear how it will affect the group’s operations.

Despite two major attacks in recent weeks, IS incidents are down overall in Iraq in the past year, according to a new study by Michael Knights and Alex Almeida.

And while the group is still believed to be providing some financial support to branches abroad, there’s little outward sign that a centralized command is directing most of the smaller attacks in Iraq and Syria, according to the study.

“I don’t think his death will have significant operational impact on the insurgency, which has already decentralized to the provincial wilayat [IS provinces] and local cell level,” said Almeida, a regional security analyst at Horizon Access, a risk advisory firm.

“They’ve got lots of guns, they’ve got lots of money, but they don’t have many people. It still seems like they’re marshaling their strength,” Knights, the Jill and Jay Bernstein fellow at the Washington Institute for Near East Policy, told Al-Monitor.

Instead, Qurayshi’s death may have a more symbolic effect on IS’s morale and recruitment.

Born Amir Muhammad Said Abdulrahman al-Mawla in 1976 near Mosul, Qurayshi was the son of an imam and pursued a doctoral degree in Islamic Studies at Mosul University.

Until his death last week, the jihadist kingpin was a rare surviving member of the inner circle of Abu Bakr al-Baghdadi, who chose Qurayshi as his successor before his own death in a US raid in October 2019.

Once an acolyte of IS godfather Abu Musab Al-Zarqawi, Qurayshi is believed to stem from a little-known cadre of IS officials from Tal Afar, a predominately Turkmen village in Iraq’s Nineveh province.

In a recent piece, Hassan Hassan, a Syrian analyst and journalist from Deir Ezzor who is now the editor-in-chief of New Lines magazine, described the circle as “a dying breed” due to years of relentless US assassinations and captures.

“The next leader of the Islamic State will most likely come from this cabal of Afaris, a network locally known as the Qaradish,” Hassan wrote, adding, “The Islamic State is coming full circle.”

That poses an ideological dilemma for IS, which insists its leader must be descended from the Prophet Mohammed, and therefore Arab.

For that reason, Almeida's assessment differs from Hassan's about who may take the helm next.

“They can’t risk just inventing a fake lineage for their caliph and having someone dig into his background and expose them," Almeida told Al-Monitor.

"This only strengthens my view that the next IS leader will probably be even more of a figurehead, and the key operational decisions are going to be made by folks one or two rungs below on their organizational chart,” he said.

Whoever is chosen as Qurayshi’s successor, it may not be publicly known for many months, if not longer. And while there are likely to be some local revenge attacks for his death, coalition forces will also be on higher alert.

The raid does not solve the IS problem.

US officials have been warning for nearly three years that the makeshift prisons and camps holding upwards of 60,000 IS members and their family members across northeast Syria are overcrowded and unsustainable.

The commander of all US forces in the Middle East, Gen. Kenneth “Frank” McKenzie, previously called the al-Hol detention camp in Syria “one of the worst places in the world” and has said the indefinite detention of a generation of children born to IS parents there will eventually turn into “a military problem.”

American officials have called for governments to repatriate their citizens in the camps, additional funding for de-radicalization programs and further donations for reconstruction in parts of northeast Syria.

But progress has been slow, and US sanctions on the Syrian regime of President Bashar al-Assad have only worsened economic conditions in the Kurdish-controlled northeast, giving IS more leverage over potential recruits.

Moreover, US military support for Syrian and Iraqi security forces has flushed IS operatives into other areas not easily accessible to American and other western special forces.

“They’re using certain areas controlled by the Assad regime, Turkish-controlled areas in Syria, Iran-backed militias in Iraq, they’re using them as an umbrella to try and keep [US forces] off them. As we see here, it doesn’t work all the time,” Knights told Al-Monitor.

UN experts have estimated the group may have up to $50 million stashed away in reserve. Meanwhile, American officials have said in recent months that the 900 US troops in Syria and roughly 2,500 military advisors in Iraq are not leaving anytime soon.

On Monday, US Central Command announced a new campaign plan for the next phase of the fight against IS.

The largely classified roadmap calls for sustained support to Iraqi and Syrian forces, including in the form of intelligence, surveillance and reconnaissance as Iraqi and Syrian Kurdish-led authorities uproot IS’s remnants.

Washington has repeatedly relied on drone strikes to reach IS and Al-Qaeda targets in opposition-held northwest Syria, and such strikes are likely to continue. As they do, expect increasing questions about what role the local Al-Qaeda offshoot may have in that contest.