The Islamic State’s third caliph has been killed in southern Syria as Iraqis retain control of the organization amid concerns and confusion about identities, fighter whereabouts and security gaps. 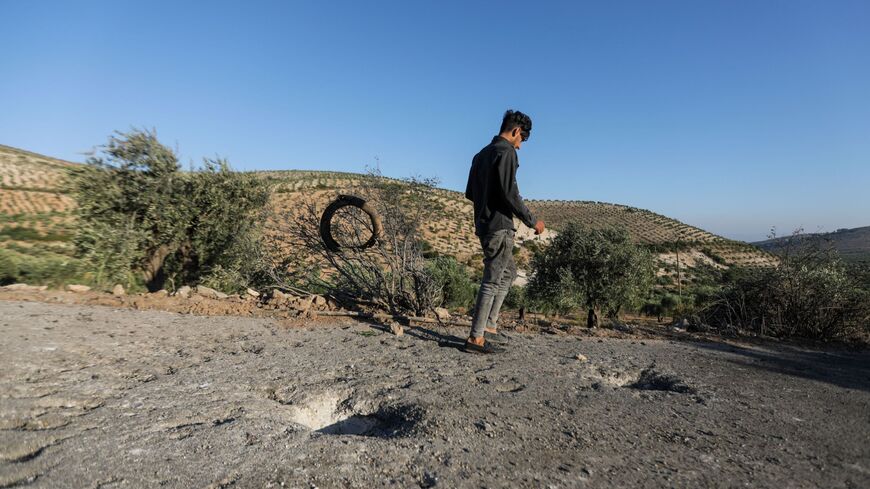 People inspect the site where a US drone strike killed Maher al-Agal, a leader in the Islamic State militant group, near the village of Khaltan, near Jindayris in northern Syria, on July 12, 2022. - BAKR ALKASEM/AFP via Getty Images

ERBIL – The killing of the third ‘caliph’ of the Islamic State (IS) was announced over a month after it happened, in an area where few expected. He is the second top leader of the international terrorist organization to be killed this year.

The man appears to have been killed in a southern province known as the cradle of the 2011 uprising, by forces that had fought for years against the central government in Damascus before “reconciling” with it in exchange for being granted de facto control over their area. The forces may have been supported in this battle by Syrian government forces, according to some reports.

In mid-October, local media reported that a man known as Abdul Rahman Al-Iraqi was killed in the town of Jassem in the northern part of the Daraa province. At that time, he was described as the emir for the southern region of the group operating in Iraq and Syria.

Only a month and a half later did IS clarify that, in fact, its leader had been killed that day.

A statement subsequently issued by Col. Joe Buccino, U.S. CENTCOM spokesman, stated, “The death of Abu al-Hassan al-Hashimi al-Qurayshi in mid-October is another blow to ISIS. This operation was conducted by The Free Syrian Army in Dar’a  province in Syria.”

The Free Syrian Army (FSA) refers to a multitude of Syrian armed opposition groups that have for the past decade fought against both the government in Damascus and IS, as well as at times against US-backed, Kurdish-led forces.

The first IS leader, Abu Bakr al-Baghdadi, oversaw the taking of vast swaths of terrain in Syria and Iraq. Baghdadi reportedly blew himself up on Oct. 27, 2019 during a US Joint Special Operations Command (JSOC) operation in Syria’s northwestern province of Idlib near the Turkish border.

The second IS caliph, known as Abu Ibrahim al-Hashimi al-Qurayshi, died in a similar manner in northern Syria on Feb. 3 of this year, reportedly after triggering a bomb that killed both him and members of his family during another US JSOC operation.

IS cells meanwhile continue to carry out attacks in both Syria and Iraq.

In mid-November, Al-Monitor was told by a Syrian contact who cannot be named for security reasons that “hundreds” of IS fighters had crossed from Syria into Iraq in recent weeks. He said that most were headed for the Kirkuk region, which he said is under the command of a ‘wali’ known as Abu Yahia.

A few days later, on Nov. 19, four Iraqi soldiers were killed in an attack attributed to IS in the Kirkuk province. Local media outlets reported that the soldiers’ bodies had been beheaded.

The oil-rich province, which lies between Erbil and Baghdad, has long been a major point of contention between Iraq’s central government and the Kurdistan Regional Government (KRG), leading to gaps in security. Despite years of attempts to resolve the situation, there continues to be problems with collaboration between the multiple forces deployed in the area.

Some of the IS fighters who crossed into Iraq in recent months, the Syrian source said, had arrived in northeastern Syria after bribing their way past checkpoints under the control of the SDF.

Others, he said, were among those who had broken out of a prison in SDF-held territory in late January. Hundreds had fled in a well-planned attack on the facilities.

Thousands of alleged IS fighters remain in prisons in northeastern Syria, where commanders have recently stated they “cannot provide the same level of security” as they previously had.

The Kurdish-led forces linked to the Kurdistan Workers Party (PKK) are preparing for a possible ground operation by Turkey into areas under their control.

The Syrian source claimed that IS fighters are usually assisted by Bedouin shepherds to cross the border into northwestern Iraq. Another Syrian source told Al-Monitor that it was also “easy” for IS fighters to arrive in Iraq via the desert border south of the Iraqi city of Qaim.

The area is under the control of Iran-linked armed groups that, he claimed, “after being attacked several times in the Syrian desert, started engaging in unofficial talks with them [IS] and allow them to pass so long as they do not attack them”.

All three caliphs thus far have been Iraqis, and it is likely that the new one is, as well. The international terrorist organization remains largely controlled by Iraqis, according to multiple sources contacted by Al-Monitor in Syria and Iraq in recent weeks.

There is still no consensus on the identity of the IS leader announced, who like other IS commanders used a nom de guerre. The US military has not been forthcoming on who it believes the man was, despite confirming that he had died in mid-October in southern Syria.

Both the US’s Central Intelligence Agency and the Pentagon supported opposition forces fighting IS in Syria’s southern desert in previous years. Some of these forces were key to pushing IS out of large areas of the Syrian desert but were later cut off by Syrian government and allied Iranian-backed militias and prevented from advancing further into IS-held areas, they told Al-Monitor at that time.

The US continues to support the Maghawir al-Thawra (MaT) forces at the Tanf military garrison. The US-backed, Kurdish-led SDF and MaT do not collaborate in any way, as coalition officials have previously confirmed to Al-Monitor.

The MaT commander told Al-Monitor in June that, “we have good relations with everyone" in the FSA, and that IS “still represents a threat and is still moving within the areas controlled by” the Syrian government.