Iraq has stepped up security amid an IS campaign called 'Battle of Revenge for the Two Sheikhs' that killed dozens in several countries in the first few days. 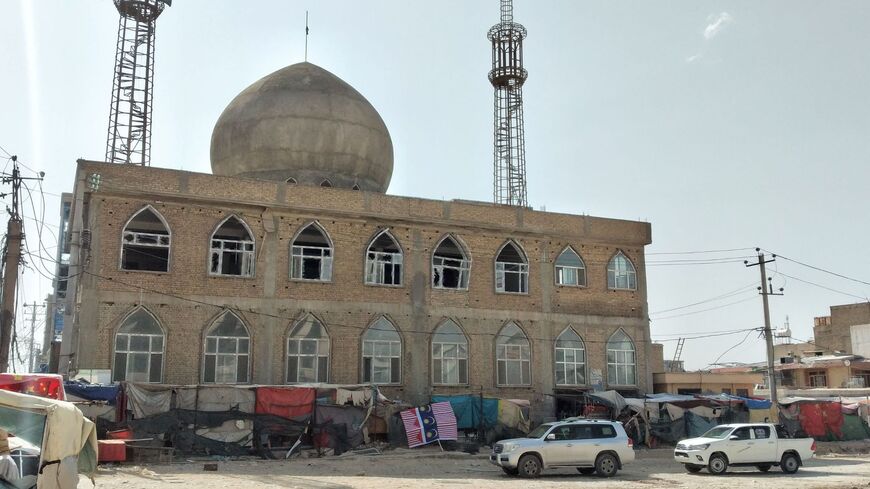 A general view of the Shiite Seh Dokan Mosque is taken after a bomb blast that reportedly killed 14 people in Mazar-i-Sharif on April 21, 2022. - AFP via Getty Images

ERBIL – The Islamic State (IS) has taken responsibility for a rash of attacks in recent days as part of their “Battle of Revenge for the Two Sheikhs,” announced on April 17 and seen as global in scope.

Multiple attacks this week in Afghanistan, Syria, Nigeria, Libya, Uzbekistan, and other locations have been claimed by the group since the announcement of the campaign, which comes amid Ramadan, the Muslim holy month. In the first three days of the campaign, 42 attacks were reported in nine countries.

A large number of casualties resulted from at least four attacks on April 21 in Afghanistan, including at a Shiite mosque in the northern city of Mazar al-Sharif near the border with Uzbekistan.

The two sheikhs referred to in the IS campaign are the former leader of the international terrorist organization, Abu Ibrahim al-Hashimi al-Quraishi, and its former spokesman, Abu Hamza al-Quraishi.

Abu Ibrahim reportedly blew himself up early Feb. 3 during a US Special Forces raid on his hideout in northwestern Syria. It is unclear exactly when Abu Hamza was killed, but his death was announced in early March by the group.

The prior leader, Abu Bakr al-Baghdadi, also reportedly blew himself up after being cornered by US forces during an Oct. 26, 2019 raid in northwestern Syria.

Iraqi intelligence had coordinated with the US on that operation and reportedly followed the former IS chief “in indirect ways through his family.”

All the top leaders of IS thus far have been Iraqis, including the current head of the organization, Abu Hasan al-Hashimi al-Quraishi.

Iraq officially declared IS defeated in the country in December 2017, but cells continue to operate within its borders.

The US-led international coalition against IS tweeted on April 21 that IS activities in Iraq had decreased by 60% since the beginning of 2022.

In the days leading up to IS’s announcement, security measures had been stepped up in the Iraqi capital. A major street in Baghdad’s central area of Karrada was temporarily closed to vehicles.

A security official from western Anbar claimed to Al-Monitor in February that “there are now close to a thousand” IS operating in the deserts of Anbar, Salah al-Din, and Nineveh, and that IS activities in the Anbar desert had been stepped up after a massive jailbreak in eastern Syria in recent weeks.

On April 15, the regional police forces in Iraq’s westernmost province of Anbar announced the arrest of Amer Wahib, the brother of the well-known Shakir Wahib.

Shakir Wahib had at one point been considered a possible successor to Abu Musab al-Zarqawi. The US claims he was killed in his native Anbar region in an airstrike in 2016.

The area where Amer was captured – Qaim, along the border with Syria – is mainly under the control of armed groups linked to Iran’s Islamic Revolutionary Guards, who cross the border largely at will.

The first claimed attack of the ‘Revenge for the Two Sheikhs’ campaign seems to have been in the area of al-Busayrah in eastern Deir al-Zor, an Arab province currently under the control of the US-backed, Kurdish-led Syrian Democratic Forces (SDF). IS claimed the attack on April 18.

Many have fled the area, while some of those remaining have over the years grown more averse to collaborating with the Kurdish-led SDF, who they perceive as both unable to protect them from IS and discriminatory towards them. This in turn leads to local residents simply refusing to pass on information about IS activities, as they feel it puts them in more danger.

The coalition operates in both eastern Syria alongside two local partner forces and Iraq, but transitioned to a non-combat mission last year in Iraq. The Syrian partners, which do not collaborate with each other, are the Kurdish-led SDF and the Arab Maghawir al-Thawra at the Tanf garrison.

In Afghanistan, IS seems to be exploiting other networks and vulnerabilities. The local branch of IS – known as the Islamic State Khorasan Province (ISKP) – is seen by many researchers as having close links with the powerful Haqqani Network (HQN), despite significant battles between ISKP and the Taliban and oft-declared hatred between them.

HQN, long been known for complex attacks on Afghan cities, has been an integral part of the Taliban for many years, but some suspect that HQN may have had a role in the recent attacks.

The US Rewards for Justice program continues to offer “a reward of up to $10 million for information on Sirajuddin Haqqani,” who is part of HQN and who has since the Taliban took over the country in August 2021 served as the country’s interior minister.

It is unclear how many of the ISKP fighters are foreigners or how closely connected they are to other IS branches, including the one in Iraq. Officially, however, they answer to the top leader of IS, an Iraqi national whose whereabouts are unknown.