The dire effects of massive jailbreaks a decade prior and the thousands of Islamic State convicts and suspects in Iraqi detention have induced greater attention to facilities in the country following an attack across the border. 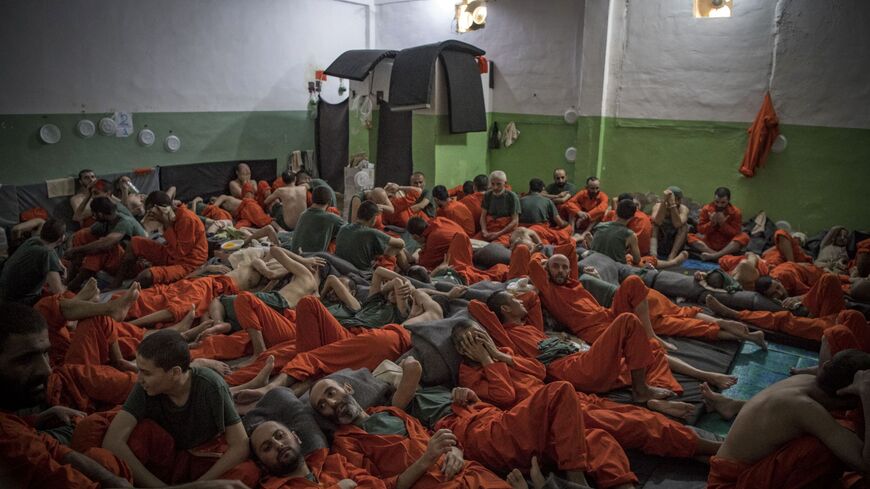 Men suspected of being affiliated with the Islamic State (IS) gather in a prison cell in the northeastern Syrian city of Hasakeh on Oct. 26, 2019. - FADEL SENNA/AFP via Getty Images

Iraq has stepped up monitoring of several of its prisons after hundreds of alleged Islamic State (IS) fighters escaped detention facilities in northeastern Syria in an attack on Jan. 20.

The spokesman for the Iraqi commander-in-chief stated on Jan. 30 that units from the country’s Counterterrorism Services (CTS) had between Jan. 22 and Jan. 30 engaged in a “major campaign to inspect” prisons in several Iraq provinces.

The prisons, he said, included ones in the cities of Baghdad, Nasiriyah, Basra, and Taji, as well as ones in the Babil and Nineveh provinces.

Iraq holds tens of thousands of prisoners either convicted or accused of involvement in IS. It has been repeatedly been criticized for extreme overcrowding and poor conditions in many of its detention facilities.

A few hours after the attack on the prison in northeastern Syria — which continued for about ten days and left hundreds dead and hundreds missing — an IS attack north of Baghdad in the Diyala province overran an outpost and killed the entire garrison: ten soldiers and an officer.

The top leader of the international terrorist organization has always been an Iraqi national, including Abu Ibrahim al-Hashimi al-Quraishi, who reportedly blew himself up early Feb. 3 during a US Special Forces raid on his hideout in northwestern Syria. His successor has not yet been named.

The Taji prison and one in Abu Ghraib, west of the capital, were hit by a major jailbreak in 2013 in which hundreds of men reportedly sentenced to death for terrorism escaped. Many are believed to have later joined the ranks of IS. Abu Ghraib was later shut down entirely.

By June 2014, IS held at least a third of Iraqi territory and did not recognize the border between Iraq and Syria. It was declared territorially defeated in Iraq in December 2017, while it lost its last territory in the Baghouz area — which stretches across both sides of the Iraqi-Syrian border — in March 2019.

Taji, roughly 40 kilometers north of Baghdad, is also the location of a military base that hosted forces from the US-led international coalition against IS until late August 2020. The base has often been targeted by Iran-linked armed groups that want all international coalition forces out of the country, some of which claim there are still US forces at the base.

US forces officially transitioned to a non-combat role in Iraq by the end of 2021 but continue to carry out combat duties in northeastern Syria, as was seen in the response to the jailbreak.

Several suicide bombers were killed prior to reaching their target in Tarmiya, just north of Taji, in the weeks prior to the Jan. 20 massive jailbreak in Syria.

Late on Jan. 18, two members of the local Popular Mobilization Units (PMU) were killed in the area. An operation conducted the morning afterward in collaboration with the Iraqi National Security Service killed three IS fighters in a nearby area.

Both Tarmiya and Taji are considered part of what is known as the "Baghdad Belt," key to security in the capital.

One source who has been inside the Taji prison multiple times in recent months told Al-Monitor in late January that each prison cell is meant to hold a maximum of 20 people, but that they currently hold between double and triple that number.

He said that the prison currently holds over 10,000 prisoners and that corruption is rampant, raising concerns about the potential for the release of inmates in exchange for bribes.

He claimed that any prisoner needing medical care must be transferred to Baghdad and that, prior to doing so, the prison administrators call the prisoner’s family and extort money from them. If the families do not pay, he said, the prisoners simply do not get medical treatment.

He also claimed that three prisoners had escaped from the prison to nearby Tarmiyah in recent months. One, he said, had been killed while the two others had been captured by Tarmiyah residents and handed back to the authorities. He said it was still unclear how exactly they got out of the prison.

Al-Monitor was unable to independently verify his claims. Repeated attempts to be granted interviews with other IS fighters and leaders in Iraqi prisons have been ignored or refused in recent years.

One Syrian IS leader that this journalist met prior to his joining the international terrorist group is reportedly being held at the vast Nasiriyah Central Prison, south of the capital in the Dhi Qar province. It is commonly referred to as "al-Hoot," or "the Whale" in Arabic, for allegedly swallowing people up. It is where the country’s executions take place and where many high-value IS prisoners and others are kept. It was one of the prisons recently inspected by the CTS.

The man is originally from an area in eastern Syria currently under the Kurdish-led armed group in charge of the prison that hundreds of IS suspects broke out of on Jan. 20. He became a key IS commander in Syria’s eastern Deir al-Zor region. He was captured alongside other major commanders in an area straddling the Iraqi-Syrian border in a 2018 Iraqi National Intelligence Service operation.