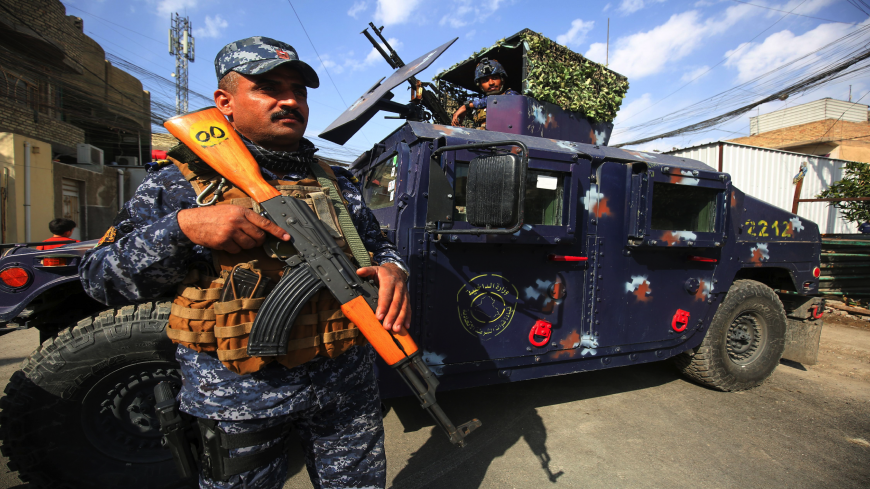 A member of the Iraqi federal police forces stands guard at a checkpoint in a street in the capital, Baghdad, on Jan. 29, 2021, during tightened security measures, a day after a man identified as the top Islamic State (IS) group figure in the country was killed. Iraq's premier announced yesterday that the military had killed the man a week after an IS attack in Baghdad killed more than 30 people. Prime Minister Mustafa al-Kadhimi said IS's Iraq "wali," or governor, Abu Yasser al-Issawi was killed in an "intelligence-led operation" by Iraqi security forces. - AHMAD AL-RUBAYE/AFP via Getty Images

ERBIL, Iraq — Despite concerns that the sharp drawdown of international troops over the past year might negatively impact counterterrorism activities, Iraq has announced the killing of several high-level commanders and operatives since late January.

Following a double suicide attack on a working-class market in central Baghdad on Jan. 21 that killed over 30 people, Operation Revenge of the Martyrs was launched.

The top Islamic State (IS) commander for Iraq — Abu Yasser al-Issawi, the nom de guerre of Jabbar Salman Ali al-Issawi, a 39-year-old native of Fallujah in Anbar province — was killed in the southern part of the Kirkuk region only a week later on Jan. 28.

Before becoming the "wali" (governor) of all of Iraq, Issawi held several other leadership positions within the international terrorist organization, including being in charge of the northern Baghdad area. He was killed in Wadi al-Shay, a valley long known for being infested with insurgents.

The operation to find and kill Issawi, however, involved both federal forces and ones in the KRG’s Sulaimaniyah, individuals close to the operation told Al-Monitor in interviews in Baghdad.

Five days after the wali was killed, Prime Minister Mustafa al-Kadhimi announced, “The terrorist Abu Hassan al-Gharibawi, the so-called leader of southern Iraq in Daesh (IS), and the terrorist Ghanem Sabah Jawad, who is responsible for transporting suicide bombers, were both eliminated today."

Gharibawi and Jawad were killed by a US-led international coalition airstrike in Abu Ghraib with the help of intelligence provided by Iraq's Interior Ministry, said Yehia Rasoul, spokesperson for Iraq’s commander-in-chief. Abu Ghraib is located just over 30 kilometers (18 miles) west of Baghdad in Anbar province on the road to Fallujah.

The two men killed were allegedly responsible for supervising and transporting the suicide bombers involved in the Jan. 21 attack in the capital.

A Feb. 20 counterterrorism operation in Tarmiya, some 50 kilometers (31 miles) north of the capital, resulted in the killing of the local commander of IS operations for the area and another high-value target.

Tarmiya has long been known as the “center of Salafi recruiting” in the Baghdad area, terrorism expert Hisham al-Hashimi, who was assassinated in Baghdad in July 2020, told this journalist in a 2018 interview.

The Tarmiya operation had a proportionately high cost in terms of men lost. Though five alleged members of IS were killed, including two high-value targets, three men from a local Sunni tribal unit and one member of the army lost their lives as well, according to a local sheikh contacted by Al-Monitor.

A security source who did not want to be named told Al-Monitor in an interview in late January in Baghdad that women had also been key to many recent arrests and killings of IS members, including Issawi, and that more operations of this sort would be seen in the coming weeks.

The source said one of Issawi’s three wives had been arrested and Iraqi security forces had gathered key intelligence as a result. He also claimed that many women who had suffered under IS ended up collaborating with the Iraqi forces and were providing vital information enabling security forces and intelligence services to track high-value targets.

Security and terrorism expert Fadhel Abu Raghief told Al-Monitor in an interview on Jan. 30 that Issawi had played a major role in IS operations in Syria as well prior to becoming the wali of Iraq for the group. He had been instrumental in Syria’s Hejin and the Baghouz, where the group made its last territorial stand in the country, he said.

The security and counterterrorism expert noted that Issawi was considered highly educated in Quranic studies and could recite the Muslim holy book by heart. The Anbar native held to a radical interpretation that included such things as the concept of "kuffar (infidel) chain," he said, meaning that anyone who considers or treats "infidels” as Muslims renders himself an “infidel” as well.

He said Issawi had been involved in the execution of 18 Kurdish peshmerga officers and had “personally supervised over 200 battles” of IS against Iraqi forces including in Fallujah, al-Karma, al-Khalidiyah and Qaim along the Iraqi-Syrian border. He noted that former IS leader Abu Bakr al-Baghdadi had “trusted him a great deal."

Raghief stressed that Issawi was known for having targeted tribes in western Anbar such as the Jughayfa and the Albu Nimr. The Albu Nimr tribe was subjected to a massacre of hundreds of civilians in 2014 at the hands of IS, while Jughayfa tribal fighters are held to have been the ones responsible for enabling Haditha to withstand a siege of over a year when IS occupied much of the Anbar province.

Raghief said Issawi had killed many people from the Albu Mahal tribe as well, including members of its tribal force in Qaim named Kata’ib al-Hamza. Kata’ib al-Hamza is led by a former SWAT commander in the city on the Iraqi-Syrian border named Abu Aya, who told this journalist in a 2018 interview there that IS retained several bases underground in the western Anbar desert and that “most of the verified intelligence on the area used by the Falcon Intelligence Cell came from Kata’ib al-Hamza."

Over the course of 2020, the US-led international coalition pulled out of several bases in Iraq and significantly reduced their presence on the ground.

International coalition spokesperson Col. Wayne Marotto told Al-Monitor on Feb. 27, “The coalition does not discuss specifics pertaining to operations, intelligence or tactics, techniques and procedures,” but it continues to support the Iraqi government and security forces (ISF) “with intelligence, surveillance, reconnaissance, logistics and airpower when requested. Operation Inherent Resolve is transitioning from a focus on tactical level train, advise and assist to a focus on advising and enabling partner forces at the operational and strategic level.”