A recent UN report and other worrying signs point to a likely surge in both an al-Qaeda and Islamic State presence in Afghanistan in the six months since the Taliban has been in power. 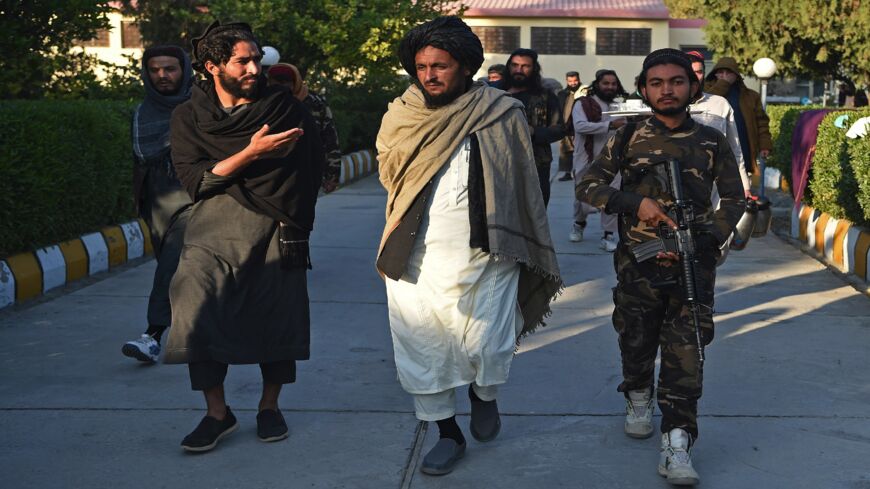 Taliban head of the Nangarhar intelligence services Dr. Bashir (C) walks inside the provincial intelligence compound in Jalalabad on Dec. 12, 2021. The Taliban promised to bring peace, but fear reigns above all in the eastern city of Jalalabad, hit by Islamic State group attacks and reprisals, and with corpses appearing mysteriously in rivers. - WAKIL KOHSAR/AFP via Getty Images

BAGHDAD — The rented home where the now-defunct Iraqi Islamic State (IS) leader known as Abu Ibrahim al-Hashimi al-Quraishi was either blown up or blew himself up during a Feb. 3 US Special Forces raid in Syria seemed one for a family of very modest means, judging by photos later released.

IS, however, still has significant financial assets to draw on, as does its rival for international jihadist supremacy, al-Qaeda. According to a recent UN report, both groups seem to be operating and growing in Afghanistan.

The Taliban takeover of Afghanistan six months ago has, as many experts predicted, already reportedly led to an increase there in both al-Qaeda and IS fighters.

The 29th report of the Analytical Support and Sanctions Monitoring Team of the UN Security Council, compiled by UN experts between June and December of 2021 and released earlier this month, stated: “Although under the Doha agreement of February 2020, the Taliban has committed itself to preventing any international terrorist threat emanating from Afghanistan, Member States are concerned that the regime will offer a safe haven for al-Qaeda, provided that the latter does not jeopardize Taliban efforts to achieve international legitimacy.”

It added that the number of IS fighters believed to be in the country had doubled in the months following the Taliban takeover to around 4,000.

IS has not yet announced the death of the man widely reported to have been the top leader in the group. The leader of al-Qaeda, Ayman al-Zawahiri, appears infrequently, and whether he is still alive is sometimes questioned.

Taliban intelligence chief Dr. Bashirmal denied to Nikkei Asia in an interview this month that IS was operating in the country, “not just in Nangarhar province but all of Afghanistan.”

Nangarhar province in eastern Afghanistan, near Pakistan, has long been a stronghold of Islamic State Khorasan Province (ISKP), the local branch of IS. ISKP has claimed responsibility for multiple attacks in Afghanistan in recent months across several provinces.

The UN report noted: “Al-Qaeda also received a significant boost following the Taliban takeover of Afghanistan in August 2021, as some of its closest sympathizers within the Taliban now occupy senior positions in the new de facto Afghan administration.”

It added, “On 31 August, al-Qaeda released a statement congratulating the Taliban on its victory. Since that statement, al-Qaeda has maintained a strategic silence, likely an effort not to compromise Taliban efforts to gain international recognition and legitimacy."

The Taliban takeover has also led to a massive drop in the prices of weapons and combat equipment across the region, given large amounts left behind by US forces and those of the former Afghan government.

This journalist was told during a reporting trip last year to Afghanistan’s Kandahar, Nangarhar and Kabul regions, shortly before the Taliban takeover of the Afghan capital on Aug. 15, that there were foreigners among the Taliban ranks in areas that had then been taken over by the group, raising questions over the Taliban’s longstanding close relations with al-Qaeda and other groups.

The reporting trip had been made during fighting between the former government’s forces and the Taliban. Several of the sources she spoke to then have either left the country or gone into hiding. One interviewee, a local police commander, was reportedly hanged by the Taliban on their entrance into the city of Kandahar.

The interviewee, who had agreed to meet briefly in Kandahar but who was even then extremely careful about security measures and would not communicate via phone or internet, had said that one Taliban commander in his area traveled with Iranian bodyguards and had frequently crossed into the country to Afghanistan’s west for decades, holding a top role in the Taliban near the Iranian border during the group’s previous years in power, from 1996 to 2001.

A plunge in the number of local media outlets still operating and heightened risks for local journalists following the Taliban takeover has rendered it even more difficult to verify information in Afghanistan than before, though the Taliban have been relatively welcoming to the presence of international media to report on rising poverty levels and some other issues.

In early February, however, the Taliban arrested two Western journalists and several local staff working for the UN’s refugee agency, UNHCR, and only released them after media reports and generalized outcry.

The UN report issued earlier this month stated: “The Taliban takeover has made it more likely that Mohammed Salahaldin Abd El Halim Zidane (alias Sayf-Al Adl), in the event that he succeeds al-Zawahiri, will have the option of establishing himself in Afghanistan to take up his new role, although one Member State has denied his presence in the Islamic Republic of Iran.”

Iran, which shares a lengthy, porous border with Afghanistan, has long been accused of harboring al-Qaeda leaders.

There are increasing signs that the Taliban takeover has also led to a rise in the regional drug trade, with effects on Iraq’s eastern border with Iran.

It has also led to at least some foreign fighters reportedly going to the country as massive movement across borders in the region — mostly of those fleeing the Taliban rule and harsh conditions in the country — continue with little regulation or oversight.

Speculation on who will be named the next IS leader is meanwhile rife.

Some Iraqi counterterrorism experts have said that the leader will once again — as always — be an Iraqi national, but that this time he will more likely be a man of greater military expertise instead of one with an Islamic law background, as his two predecessors were.

One of the experts told Reuters that one of the possibilities is “Abu Yassir al-Issawi, who is suspected to be still alive. He's valuable to the group as he has long military experience."

The same Iraqi expert told this journalist in January 2021, when Issawi was reportedly killed, that the man “had been involved in the execution of 18 Kurdish peshmerga officers,” had “personally supervised over 200 battles” of IS against Iraqi forces including in Fallujah, al-Karma, al-Khalidiyah and Qaim along the Iraqi-Syrian border, and that he “was known for having targeted tribes in western Anbar such as the Jughayfa and the Albu Nimr.”

An official from the US-led international coalition against IS responded to a request from Al-Monitor about the certainty of Issawi’s death by saying that “we have high confidence that Abu Yassir al-Issawi was killed in January 2021.”

He did not respond to a question about whether they had done DNA testing or other evidence to prove this.

Access to financial resources, training grounds and a welcoming location are in any case likely to prove more important than who the new IS leader is, and Afghanistan under the Taliban has the potential to serve these ends.