Measures have been stepped up along the border with Syria in the now-defunct Islamic State leader’s native province to prevent hundreds of prison escapees from slipping across. 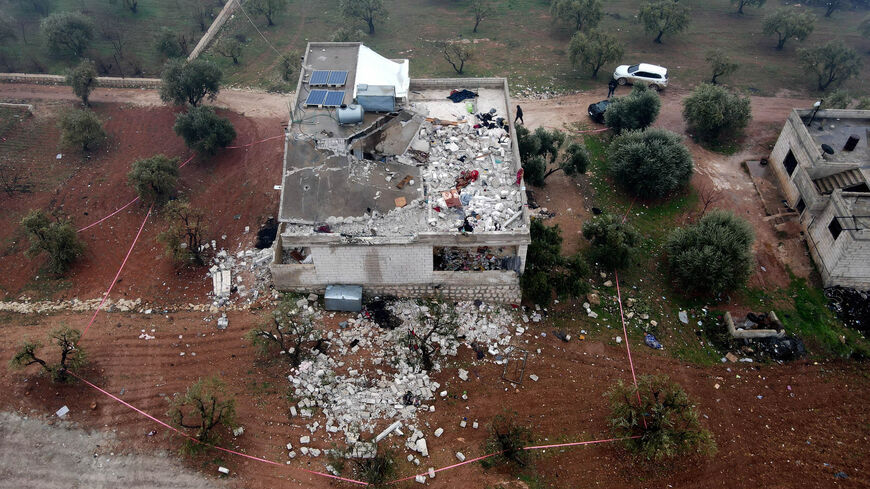 An aerial view of the house in which IS leader Abu Ibrahim al-Hashimi al-Quraishi died, during a raid by US Special Forces, in the town of Atme, Idlib province, Syria, Feb. 4, 2022. - Aaref Watad/AFP via Getty Images

After hundreds of alleged Islamic State (IS) fighters escaped detention facilities in northeastern Syria in an attack in late January, Iraq says it has stepped up control of its western border.

The focus has been on Ninevah province, the birthplace of the now-defunct IS leader known as Abu Ibrahim al-Hashimi al-Quraishi. Quraishi reportedly blew himself up early Feb. 3 during a US Special Forces raid on his hideout in northwestern Syria.

The Iraqi intelligence services had, allegedly with the assistance of their Turkish counterparts, captured a close associate of Quraishi in October 2021 and brought him back to the country for interrogation.

In a Jan. 31 security briefing, the commander of the Iraqi Border Guard Forces, Lt. Gen. Hamid al-Husseini, stated, "The forces have begun to develop a strategic plan to control the borders with Syria. The borders are entirely monitored by thermal cameras.”

He claimed that the Iraqi forces had stopped “most of the cross-border smuggling” that has long plagued that particular border.

The jailbreak began with a suicide attack on the evening of Jan. 20, and fighting continued with brief lulls for over a week afterward. Combing operations continued in northeastern Syria as of early February, but hundreds of IS suspects had then reportedly left the city.

Thousands of those detained in the facilities were Iraqi nationals.

A source from eastern Syria had told Al-Monitor late last year that the prison attacked in late January continued to host many high-value Iraqi IS leaders, including several who had direct contact with IS' first leader Abu Bakr al-Baghdadi.

Many of the tens of thousands of people held in camps in northeastern Syria, most of whom are relatives of IS fighters, are also Iraqi nationals.

On Nov. 13, three Iraqi nationals including one woman were reportedly shot and killed in al-Hol camp in Hasakah province, where the January jailbreak occurred.

The camp is run by the Kurdish-led administration and currently houses over 50,000 people, roughly half of whom are Iraqis. Of the 78 people known to have been killed in the camp last year, 58 were Iraqis and at least 10 were beheaded.

Iraq’s lengthy border with Syria is notorious for being porous and frequently crossed by fighters of various groups including Iran-linked "resistance" armed factions, groups linked to the Kurdistan Workers Party, IS and other terrorist groups.

In December, Al-Monitor reported that jihadis recently arrived from Syria had allegedly been involved in a string of attacks on peshmerga forces: "If these forces have been making their way to Iraq and are now playing a part in attacks attributed to IS, this would mean that ratlines have been solidified and networks are likely in place to bring in more foreign fighters that are 'too extreme' to live under the yoke of HTS [Hayat Tahrir al-Sham] in Idlib or who have grown concerned about possibly being targeted there.”

The country’s border with Syria has also long suffered from the smuggling of drugs, sheep and other goods, and at times IS fighters have allegedly disguised themselves as shepherds to cross the border.

In early 2020, the head of Iraq’s elite Falcon Cell Intelligence at that time, a man known as Abu Ali al-Basri, had told Al-Monitor in an interview that the vast desert of the Anbar region in western Iraq along the Syrian border had a lower risk of IS attacks, in part because IS was concerned that some of the shepherds in the mostly desert region “may be our sources,” and that IS thus no longer trusted the area as much.

However, most of Iraq’s border with Syria bordering the territory under the Kurdish-led Syrian Democratic Forces — in charge of the prison from which the hundreds of IS members escaped late last month — lies in Ninevah province, north of Anbar.

On Jan. 31, the Iraqi Interior Ministry’s Agency of Intelligence and Federal Investigation said that it had arrested two IS affiliates in Ninevah province, including the commander of the Omar Ibn al-Khattab Brigade. No further details on the brigade or when and exactly where the arrests had taken place were provided.

At the Jan. 31 security briefing, the deputy commander of Joint Operations Command, first Lt. Gen. Abdul-Amir al-Shammari, claimed, “There is complete control over [Iraq’s] international borders. A second line [of defense] will be established and additional forces will be sent to the border guards.”

Iraq has been trying to fortify this border since it declared a territorial defeat of IS in the country in December 2017.

This involved, according to the media outlet Diyaruna, “the establishing of three parallel defense lines 10 meters apart: The first starts with a metal fence, the second consists of barbed wire and watchtowers, while the third line includes 100 long-range thermal cameras.”

The US-led international coalition against IS has provided both training border guards and thermal cameras, which seem to have proven useful for fighting terrorism in general and for catching those trying to cross into Iraq.

In November, several families that Iraqi media outlets called “IS families” were caught using these cameras and sent back to Syria.

Counterterrorism Services (CTS) chief Col. Gen. Abdul-Wahab al-Saadi reportedly stated that the CTS had carried out 21 operations over the previous month and had arrested 17 detainees now under investigation. The CTS focuses mainly on operations against IS.

Corruption, however, has also long been of serious concern, as bribes are generally part of cross-border smuggling.

In the February 2020 interview with the Falcon Cell Intelligence chief, Basri had stressed, “Terrorism generates corruption and corruption generates terrorism,” urging greater measures to reduce this longstanding plague on Iraq.

Stopping corruption at customs points along the country’s borders was one of the first focuses of Mustafa al-Kadhimi’s government.

In January, Iraq was taken off the European Union’s list of countries at high risk of money laundering and financing terrorism.

Corruption and the unregulated crossing of borders by some armed factions, alongside other issues, could, however, continue to create problems for border control.