The head of the Falcon Intelligence Cell, Abu Ali al-Basri, spoke to Al-Monitor about the lingering Islamic State presence in the country and discussed his idea of setting up a similar team to fight corruption. 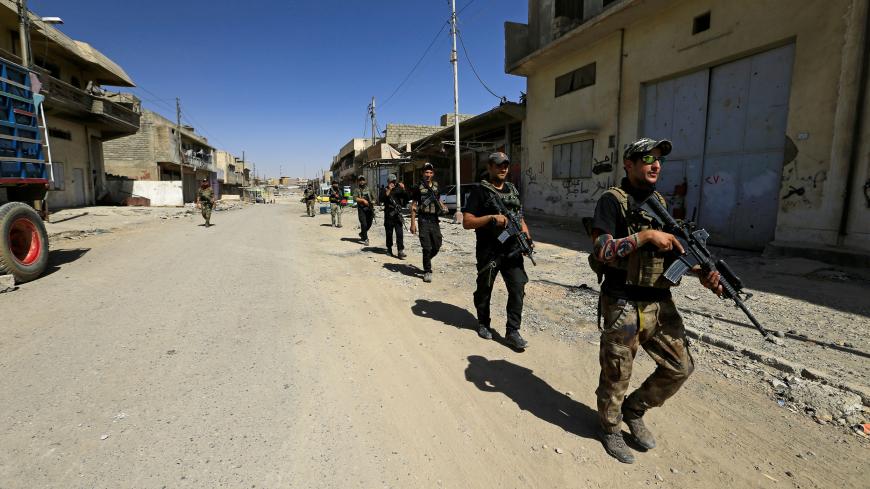 Basri leads Iraq's elite Falcon Intelligence Cell, which was created to focus on extremist groups including Al-Qaeda and the Islamic State (IS). The counterterrorism intelligence unit has become better known after some high-profile cases and successes in recent years.

Basri told Al-Monitor in a Baghdad interview in late February 2020 that the unit has also at times been involved in corruption cases linked to terrorism.

Only on extremely rare occasions does Basri grant in-person interviews to journalists. His real identity, name and identifying details must remain a secret for security reasons.

This reporter was previously granted another interview with him in mid-July 2019, when he discussed mainly the hunt for IS leader Abu Bakr al-Baghdadi as well as intelligence exchanges between different countries leading to key arrests and killings.

Basri claimed the Falcon Intelligence Cell had arrested some 2,500 people for involvement in IS in the last six months of 2019 and 2,600 others for cases linked to terrorism “such as kidnappings and killings” not related to IS.

He said some of the 1,500 alleged IS members handed over to Iraq who had been caught and imprisoned in territory currently held by the Syrian Democratic Forces last year turned out not to be of Iraqi origins, such as a Chinese national, a Palestinian, a Tunisian and two Iranians.

“But since they committed crimes against Iraqis on Iraqi soil, they are being tried and sentenced here,” he said.

IS members who escaped capture continue to be found and arrested, and attacks attributed to the terrorist group, though less frequent, continue to occur in Iraq.

Basri said the province of Salahuddin, followed by other areas between Kurdistan Regional Government (KRG) and Iraqi central government territory, including Diyala and Kirkuk, were where the greatest concentration of IS-linked groups and individuals are located and are at the highest risk for attacks.

Basri said Anbar in western Iraq along the Syrian border has a lower risk and has seen fewer attacks. IS was concerned that some of the shepherds in the mostly desert region “may be our sources,” and IS thus no longer trusted the area as much, he added.

He cautioned, however, that “there is a large number of IS supporters currently in the KRG, but they are not active for the time being," adding that the Falcon Intelligence Cell had arrested “one or two” Iranians from the Ahwaz region who had crossed into Iraq and were involved with IS in 2019.

Former IS leader and Iraqi national Baghdadi blew himself up after being cornered by the United States during an Oct. 26 raid in the Idlib province in northwestern Syria. IS confirmed his death Oct. 31 and named a new leader they referred to as Abu Ibrahim al-Hashimi al-Quraishi.

The organization claimed the man was part of the Qureishi lineage and thus related to the Prophet Muhammad.

Basri confirmed, however, that a Jan. 2020 article was correct in stating that his real name was Amir Mohammed Abdul Rahman al-Mawli al-Salbi — a Turkman from Tal Afar with family members in Turkey.

He said the name announced by IS was an attempt to make the leader seem more palatable to followers expecting him to be of the Qureishi.

Basri said Salbi had been in Mosul prior to when IS took control of the city in June 2014, and he had been more "takfiri," or extremist, than Baghdadi in terms of accusing other Muslims of apostasy. When asked to cite an example, he said Salbi had wanted all teachers who had worked with the Iraqi government to be executed. The intel chief said the new IS leader is “absolutely” in Syria.

Basri noted that the Falcon Intelligence Cell can carry out arrests only after getting a judicial order to do so.

But prison capacity in the country is limited, he said, and often the Falcon Intelligence Cell ends up holding those it has arrested in its own detention facilities longer than necessary — the unit carries out arrests, investigations and interrogations, but the prisoners should be moved to a regular prison afterward — simply because there is “no space left in prisons under the Justice Ministry.”

Basri said collaboration between US and Iraqi forces had stalled for a period of time after the Jan. 3 killing of Iranian Maj. Gen. Qasem Soleimani and Abu Mahdi al-Muhandis sparked tensions, but it has fully resumed.

Over two years after the official declaration by then-Prime Minister Haider al-Abadi in December 2017 that IS had been defeated in the country, some of the focus has shifted to the ways in which terrorist groups fund their activities and recruitment.

Abadi had announced in December 2017 that a “war on corruption” would begin. However, ongoing anti-government protests across central and southern Iraq that began in October have focused on this very issue, which is that corruption is still rife across the country.

Basri said the Falcon Intelligence Cell could take on a greater role in fighting corruption and another similarly structured tactical team should be formed if not.

“As the Falcon Cell, we have earned a very good reputation over the years” in fighting terrorism and even in “protecting women” through tracking down men trying to blackmail women online through inappropriate personal photos and videos, he said.

“No one can fight IS if they are corrupt,” he said, “and the cell worked hard for years and was successful.”

He noted he had raised the idea with the government but has not yet received a response.