Al-Monitor was granted an exclusive interview with the head of Iraq’s secretive counterterrorism intelligence unit, Abu Ali al-Basri. The Falcon Intelligence Cell director discussed what remains of the Islamic State, potential future risks and how the unit shares information with other countries. 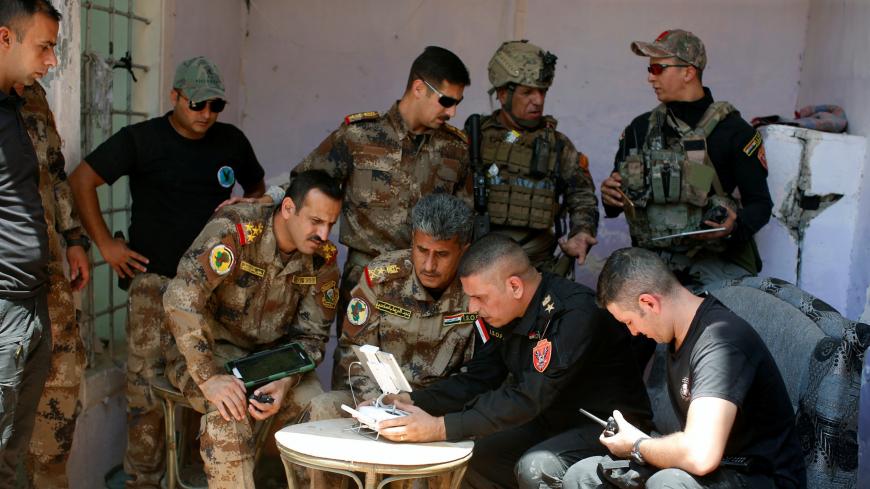 Officers from Iraq's counterterrorism service watch a video transmitted from a drone during a meeting of Iraqi forces at the front line in the Old City of Mosul, Iraq, June 27, 2017. - REUTERS/Erik De Castro

BAGHDAD — The head of Iraq’s Falcon Intelligence Cell knocked sharply on a wooden table nearby, saying the unit had lost "less than a handful of men’’ in its operations against al-Qaeda and the Islamic State (IS) over the years.

The injuries were reportedly sustained in a joint operation between his unit and the Iraqi Air Force last year in Hejin in Syria’s Deir al-Zor province.

In an interview with Al-Monitor in his Baghdad office on July 19, Abu Ali al-Basri said the cell had lost ‘’less than a handful of men’’ in their operations against al-Qaeda and IS over the years.

"We killed over 3,500, though," including by providing coordinates for airstrikes in Iraq and Syria, the director of Iraq's notoriously secretive counterterrorism intelligence unit added.

The only publicly acknowledged loss in the cell’s ranks was that of IS infiltrator Capt. Harith al-Sudani, profiled in a New York Times article in 2018.

The Falcon Intelligence Cell has been credited with being key to the victory against IS in Iraq — and al-Qaeda before that — but few were aware of its existence until last year.

Many of Basri’s men have received training from other countries’ services and some have provided training to others, he said, "but it is experience that makes them good at what they do."

Major operations include one earlier this year in which 186 men were reportedly arrested, some responsible for major attacks in Baghdad and Anbar province. These arrests later led to additional information and leads.

Partially for this reason, Basri said, not much can now be said about specific IS commanders — now that the terrorist organization has gone back to being more secretive about its hierarchy — nor can recent arrests be discussed in detail.

He told Al-Monitor, however, that IS "is very different from al-Qaeda. Al-Qaeda always published announcements of their ‘martyrs’ as soon as they were killed. IS learned from the Baath regime. Many of them were in it. They often don’t announce the deaths of important figures until years later, if at all."

"They lie and deceive, like Saddam’s regime did. You remember how they (Saddam’s regime) were reporting that they were winning in Baghdad when the US was at the gates to the city?" he said. "That is their style."

Basri claimed that most IS military commanders have been killed but that a small number are still in Iraq, more in Syria, and a few also in Sudan, North Africa and Asia.

He added that some "historic" commanders from the 2006-2012 era are still alive and active but declined to give any names.

"However, none of the top-level" military commanders are still alive in Iraq, he said, "and only very few second-level ones are."

Basri said the whereabouts of current IS religious leaders are known by the intelligence unit but cannot be disclosed.

The unit has contact with other countries’ intelligence services, he added, but not all countries and not directly in some cases.

Basri noted that his team has no direct contact with the Syrian government, for example.

However, there is the "four-member operations room" in Baghdad involving Syria, Iran, Iraq and Russia, he said, through which information is often channeled.

Basri said the Falcon Intelligence Cell had warned the Syrian government about Jabhat al-Nusra and IS early on but that this warning had not been heeded.

"And we share information with whomever, whenever necessary. Our priority is to save lives. And in this, time is of the essence," he said.

But in Syria, "It is very complicated. There are so many countries involved."

On frequent accusations that particular countries support the terrorist group, he said, "As professionals, we do not say specific countries supported IS. Perhaps some turned a blind eye, for whatever reasons. Some later regretted it and lost thousands of their citizens to it. IS is loyal to no one. Even if you support them they may do something against you."

He said that within Iraq, the unit has "much closer" relations with intelligence units in Sulaimaniyah than with Erbil in the Kurdistan Regional Government area.

Recent arrests, he noted, included terrorists who had entered via the Iranian border — including near Sulaimaniyah — and had been planning attacks, but added that nothing more can be said about this to avoid compromising future operations.

Tension between tribes — such as in western Anbar in Qaim, where "IS members of some tribes killed even women of rival ones in the main street" — does not for the moment seem to be serving as a recruiting factor for terrorist groups.

Basri stressed that most IS fighters that have not been captured or killed are currently in Syria, not Iraq.

He said the Syrian province of Idlib is an area with extremists of varying allegiances. It is not only IS that is the problem, he said.

For example, he said Abu Maria al-Qahtani, an Iraqi from Mosul and former policeman who was instrumental in recruiting fighters for Jabhat al-Nusra, especially in Syria’s eastern Deir ez-Zor region, and whose real name is Maysar al-Jabouri, "has the potential to set up a new organization."

Qahtani is believed to be in Idlib now, as several Syrian sources have confirmed to Al-Monitor. He was previously Jabhat al-Nusra’s top religious leader and a military commander after being involved in al-Qaeda in Iraq.

In 2014 he had fought against IS in Deir ez-Zor, where many young fighters in various Free Syrian Army groups looked up to him prior to their withdrawal from the area after Mosul was taken in mid-2014.

Qahtani exploits situations and people, Basri said, but "doesn’t have the charisma of [Abu Musab al-] Zarqawi or others." Zarqawi was killed in 2006.

For example, Qahtani "takes advantage of disaccord between religious figures and wealthy men in the Gulf,’’ Basri said, adding, "Many European fighters were attracted to a middle way between AQ [al-Qaeda] and IS," and "men like Qahtani know how to use this."

However, "If he ever dares to come back to Iraq, he will suffer the same fate as Abu Omar al-Baghdadi. And you remember what happened to him, don’t you?" Basri asked, smiling." The Islamic State of Iraq leader was killed in 2010 near Tikrit and his body was found in a hole in the ground.