Will al-Qaeda capitalize on IS losses at Iraqi-Syrian border?

Al-Qaeda may be posed to make a comeback in eastern Syria and parts of Iraq, exploiting its historic roots in the area after the territorial defeat of the Islamic State. 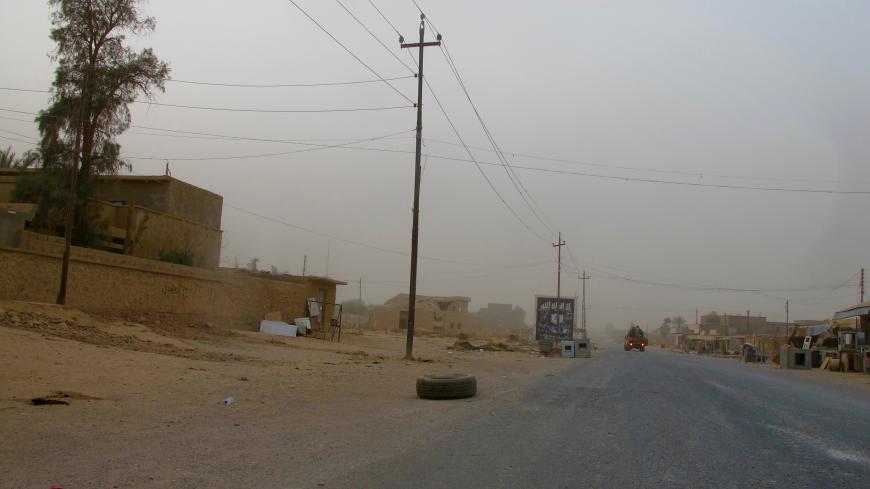 A street in the Iraqi city of Qaim shortly after it was liberated from the Islamic State, Nov. 6, 2017. - Shelly Kittleson/Al-Monitor

QAIM, Iraq — The Islamic State (IS) might have lost all its territory in Iraq and Syria, but its ideology has not been defeated. Al-Qaeda may be able to exploit this situation and stage a comeback, taking advantage of its local roots along the Iraqi-Syrian border.

Though al-Qaeda and IS have fought each other across the border in Deir ez-Zor, most Iraqis use the two terms interchangeably, since the local branch, al-Qaeda in Iraq, eventually morphed into what is now known as IS.

In Syria, many acknowledge that there is scant difference between the two groups when it comes to ideology and oppressive methods. Yet many see al-Qaeda-linked groups as more locally rooted. Various opposition groups have even allied with them at times in an attempt to bring down the Syrian regime.

Qaim's Col. Moussa Hamad al-Karbouly, however, summed up the difference as follows. IS "used religion for military ends, while al-Qaeda used military means for religious ends," making it more amenable to those disillusioned with IS.

Karbouly is a former police officer and head of the Aaly al-Furat Brigade, which is part of the local Popular Mobilization Units (PMU) in western Anbar. Al-Monitor has interviewed him several times before, including after the liberation of his city, and most recently on April 3 in Qaim.

His father was killed by relatives who joined al-Qaeda. Karbouly has long tracked local members of the two terrorist organizations.

Members of the Karbouly tribe have been important IS leaders, including Omar al-Karbouly, who, as Al-Monitor reported last year, worked "closely with Abu Moussa al-Zarqawi as a top-level leader starting in 2003" and was captured in 2018 by Iraqi intelligence forces.

Karbouly told Al-Monitor he had seen Omar in a market in Fallujah in 2008 and “grabbed him and put a gun to his head, handing him over to the police there. But he bribed them to get out and then bombed my home.”

He told Al-Monitor the names of local IS members who he said "did not take part in recent battles" and who he thinks are likely to return to their roots in al-Qaeda.

"We have information that al-Qaeda is operating" in the area again, he said, mentioning local leaders Tariq Khalif Assi al-Karbouly and Adnan Sharif.

"They were al-Qaeda leaders who did not take part in recent IS battles," he added.

"Tariq al-Karbouly, a.k.a. Abu Ahmed, joined al-Qaeda in 2005," he told Al-Monitor. He was soon "detained for five years in Camp Bucca. He tried to escape several times. After his release he returned to making [improvised explosive devices] and has a great deal of experience in the field."

Some of them have left their families and fled to the Iraqi desert, Karbouly said.

Alleged IS supporters in the Iraqi town of Tarmiya, meanwhile, grieved the death of a Syrian fighter with the US-backed Syrian Democratic Forces (SDF). The fighter, known as Abu Ishaq al-Ahwazi, was killed in January in an attack attributed to IS, according to a security source from the town. (Counterterrorism expert Hisham al-Hashimi has called Tarmiya "the center of Salafi recruiting in the Baghdad area.")

Ahwazi had in recent years joined the SDF to return to his native Deir ez-Zor and to continue fighting IS, though his friends told Al-Monitor he supported al-Qaeda's ideology until his death. He was known for being "the first in his area of Deir ez-Zor to fight against IS," allegedly by killing two Tunisian fighters, area natives told Al-Monitor.

He had been a Syrian regime officer prior to joining the Free Syrian Army (FSA).

This correspondent interviewed Ahwazi several times during his years as an FSA commander, including when he fought in Idlib and northern Syria after the FSA was forced to withdraw from Deir ez-Zor. He repeatedly praised former al-Qaeda leader Abu Maria al-Qahtani, calling him a "hero."

Abu Maria al-Qahtani, an ex-policeman from Mosul whose real name is Maysar al-Jabouri, served on the Shura Council of Syria's al-Qaeda affiliate, Jabhat al-Nusra. He advocated early on for its split from IS.

Photos of Ahwazi in military attire continue to be used as profile photos by many from his area. It seems even Iraqis in former al-Qaeda strongholds grieved his death.

Meanwhile, in the eastern part of Syria now under the control of the SDF, local Arab sources have repeatedly told this correspondent that many IS fighters were "rehabilitated" and later used in the ranks of the SDF. This has prompted anger among many in an area that suffered a major tribal massacre after an uprising against IS.

Al-Qaeda may find the border area fertile ground once more, given its history of local recruitment during the post-2003 insurgency. Furthermore, some locals are aggrieved at the Kurdish-led forces, whom they see as "invaders" of Arab lands. Locals are also disillusioned with IS, and they reject Syrian regime control — all important factors in considering the potential for an al-Qaeda comeback.

The SDF has stressed that it cannot handle the multitudes in its jails, even before tens of thousands of IS fighters, supporters and their families were unexpectedly found in an area where "not more than a few hundred" were thought to have been holed up.

An attack in late March on regime positions near Shuheil — an al-Qaeda stronghold even before 2011 — was said to have been the first in eastern Syria to be claimed by an al-Qaeda-linked group in almost five years.

Hayat Tahrir al-Sham and other groups with previous or current links to al-Qaeda, meanwhile, remain strong in Idlib, where millions of internally displaced people from other areas of Syria are struggling to survive. Abu Maria al-Qahtani is thought to be in Idlib.

If former al-Qaeda commanders with experience and local knowledge were to "go back to their roots" and shift to the Iraqi-Syrian border area, where competing forces at times create grievances and confusion, areas hit hard by IS and the battles to defeat it may see fluid alliances among outlaws, and those with little to lose may switch back to al-Qaeda.

Karbouly expects this to occur "within months."