Counterterrorism operations in Iraq’s western desert have resulted in the killing of an Islamic State leader as regional tensions rise across the border ahead of a likely Turkish military operation in northern Syria. 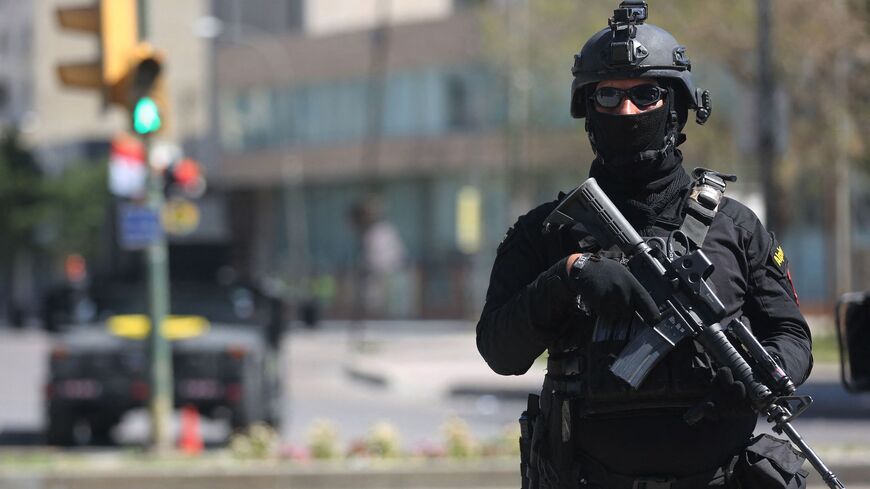 Members of the Iraqi Counterterrorism Service are deployed in the streets of Baghdad on March 27, 2021. - AHMAD AL-RUBAYE/AFP via Getty Images

Iraq has in recent weeks stepped up counterterrorism operations in its western desert and other areas amid risks of an imminent flare-up of conflict in eastern Syria, with potential repercussions in the regional fight against the Islamic State (IS).

On June 19, the government-linked Iraqi Security Media Cell announced that an operation in coordination with the Joint Operations Command and intelligence services had killed the IS "wali," or governor, for the Anbar region and “three of his companions.”

The wali, who the statement said went by the name Abu Mansour, was killed in the Rutba desert after multiple operations in recent months by Iraq’s Counterterrorism Services (CTS) in that part of Iraq’s largest but sparsely populated province.

Al-Monitor accompanied the CTS last March on one of these operations into the Rutba desert. The forces stopped in shepherds’ encampments and requested information, searched caves identified via coordinates that had signs of the recent presence of alleged IS fighters, and destroyed motorcycles and other things that seemed to have been used by the fighters in the apparent hideouts found.

These operations typically start at dawn from the Ain al-Asad base near the town of Baghdadi and can last several days, with the forces spending the nights in the desert. They attempt to gather intelligence as well as make their presence known, serving as a deterrent for IS cells and increasing a sense of security for locals under potential threat from IS.

A surge in dust storms in recent months severely reducing the visibility and operational capacity of Iraqi forces for days at a time has been exploited by IS cells in the area. The Ain al-Asad base has been attacked multiple times in recent years, mainly by shadowy Iraqi militias believed to be close to Iran — as well as Iran itself via ballistic missiles in early 2020.

Western Anbar is largely desert land with the exception of the fertile Euphrates River Valley, which enters Iraq from Syria at the border city of Qaim. Qaim has seen a marked improvement in the fight against IS in recent years but suffers from continuing dissatisfaction among the local population with the presence of Iran-linked armed groups operating in the area and growing drug smuggling, according to multiple local civilian and security sources.

High unemployment and land grabs by these "muqawama," or Iran-led "resistance," factions have prevented scores of locals from making use of their farmland and forced some to leave the area again after returning following the defeat of IS in the area in late 2017.

Anbar has seen less IS activity in recent years than areas disputed between the central government and the Kurdistan Regional Government (KRG). However, its desert terrain coupled with a history of being a stronghold of multiple jihadist groups and social problems linked to joblessness and cross-border smuggling make it a potential breeding ground.

The Rutba desert south of Qaim where the IS wali was announced killed this month has long been a problem, however. In April 2021, for example, orders were given to arrest three Iraqi border guard commanders after positions were abandoned and equipment and weaponry were left to alleged IS fighters.

Clashes occurred between the police and IS near Rutba along a road used to arrive at the Trebil border crossing with Jordan in late January of that year. Local security forces at that time claimed such clashes happened “almost daily” and drug smuggling occurring in the area between Qaim and Rutba was behind the festering presence of IS cells and instability in that area.

Further north and across the border in northeastern Syria, US-backed, Kurdish-led Syrian Democratic Forces (SDF) have long threatened that any attack from Turkey on their territory would result in halting of operations against IS to focus on the fight against Turkey.

Turkey has said in recent weeks that it will conduct another operation soon against the SDF in northern Syria.

Amid an already chaotic situation as concerns IS cells in SDF territory, SDF leaders have in recent weeks also declared their willingness to work with the Syrian government under Bashar al-Assad against Turkey.

Despite receiving funding and various other forms of support from the US-led coalition, the SDF and its dominant component, the People’s Protection Units (YPG), have long collaborated with the Syrian government when it seemed expedient to do so. The YPG is closely linked to the Kurdistan Workers Party (PKK), designated a terrorist group by Turkey, the United States, the EU and other states.

The Syrian government holds pockets of territory within SDF-controlled areas of eastern Syria.

Following a massive jailbreak from an SDF-guarded prison in northeastern Syria across the border from Iraq’s Ninevah province north of Anbar in January, a local source told Al-Monitor that some of the IS fighters who broke out had arrived in the nearby Raqqa region and “taken control of areas that Syrian government forces have left,” claiming that “at least four areas are now controlled by IS in Raqqa” without explaining how big these areas were.

The prison had housed thousands of former IS fighters. Hundreds escaped, though exact numbers are unknown.

Recent IS attacks in eastern Syria have attracted little media attention but continue, such as one that killed 13 Syrian soldiers along a road running from the Raqqa region to Deir ez-Zor. The Deir ez-Zor region is on the Syrian side of Iraq’s western border.

A June 16 US-led international coalition operation captured “Hani Ahmed al-Kurdi. Al-Kurdi was an experienced bomb maker and operational facilitator who became one of the top leaders in the Syrian branch of ISIS,” according to a statement.

He was captured in a part of the Aleppo province of northern Syria under Turkish-backed Syrian opposition forces, west of the area of the country held by the SDF.

A coalition source contacted by Al-Monitor for further information about the capture of Kurdi said that “the other occupants of the compound complied with directions and were not deemed a threat” and that Kurdi “remains in US Forces custody.”

A question for further information about the detained man’s background and whether — as the name “al-Kurdi” would suggest — he was of Kurdish origins went unanswered.

The coalition source added that the “operation was deconflicted with Turkish military via existing deconfliction channels prior to launch.”

On the Russian targeting of outposts held by the US-supported Syrian Arab opposition group Maghawir al-Thawra near the Tanf garrison near Jordan earlier this month, a coalition source told Al-Monitor that “the US seeks to avoid conflict with Russia in Syria. We seek to avoid miscalculation or a set of actions that could lead to unnecessary conflict. That remains our goal. However, Russia's recent behavior has been provocative and escalatory.”

Russia is a close ally of the Syrian government, as is Iran. Both Russian and US forces are deployed to areas of eastern Syria under SDF control along Iraq’s western border.