Massive amounts of drugs are being smuggled across Iraqi borders while a large anti-terrorism operation including Iran-linked forces and US-led coalition support continues. 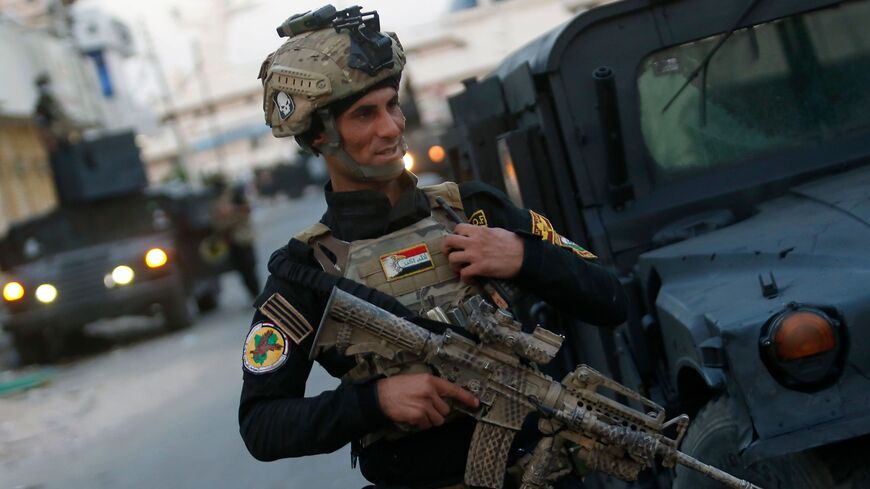 ERBIL, Iraq — Multiple major drug busts in Iraq in recent weeks have been followed by an operation against Islamic State (IS) cells in several provinces, including western Anbar.

Enormous quantities of the illicit substance known as Captagon have been seized in recent months in areas not far from Iraq’s western border with Syria, which is part of a vast desert and hard to control.

A recent increase has been seen in fake checkpoints set up by IS fighters wearing military uniforms. This tactic was typically used more by al-Qaeda during the height of its activities in the country; it now seems to be regaining popularity as part of IS’s attempts at boosting its current low-level insurgency.

Some government forces including officers and members of the Popular Mobilization Units (PMU) have been killed during the ongoing operation known as Operation Solid Will or Operation Willing Resolve II, as the US-led anti-IS coalition calls it. Others have been injured.

The first part of the operation was conducted in late March and focused on the areas north of the Euphrates River in Anbar province, Lt. Gen. Abdul-Amir al-Shammari said at that time. It lasted three days and reportedly resulted in the destruction of hideouts and tunnels used by IS as well as the discovery of weapons caches.

The second phase started April 23, with Prime Minister Mustafa al-Kadhimi making a visit to western Anbar for the launch and the official announcement stressing that the operation was being carried out on the basis of “accurate information.”

Kadhimi became the Iraqi National Intelligence Service (INIS) director in 2016 and led the agency's reform. His efforts to centralize security operations have been resisted by some armed factions close to Iran.

A coalition official stated in response to a request for details on Operation Solid Will that “the Coalition is advising, assisting and enabling our partner forces as we normally do” in this second phase.

Shiite-led, non-local PMU brigades seen as having links to Iran are also taking part, as are local “tribal” Sunni PMU.

Head of the PMU for western Anbar Qasim Muslih told Iraqi state media April 23 that the country's borders with neighboring countries were "fortified and well maintained,” claiming that 12,000 PMU fighters were taking part in the ongoing operation.

The desert south of Qaim stretching to Rutba in western Anbar province and the area near Hit have long been signaled to this correspondent by locals as potentially troublesome spots.

As this Al-Monitor correspondent reported in 2020 in quoting local sources, “A new IS cell in the city of Heet (another transliteration for Hit) further east was of concern, as was the entire area around Rutba south of Qaim,” a focus of this latest operation two years later.

IS recently claimed responsibility for an April 9 attack near Hit that killed two Iraqi soldiers. When reporting from the Trebil border crossing near Rutba in early 2021, this reporter was told that clashes that happened the day of her visit between IS and the army along the road were “normal” for the area.

In late April 2021, orders were issued to arrest three Iraqi border guard commanders near Rutba “after positions were abandoned and equipment and weaponry were left to alleged Islamic State attackers,” as Al-Monitor reported then.

In March of this year, this journalist accompanied Iraqi Counterterrorism Services (CTS) on an operation into the desert near Rutba during which the forces stopped in shepherds’ encampments and requested information, searched caves identified via coordinates that had signs of recent presence of alleged IS fighters, and burned motorcycles found hidden in tall grass nearby to prevent their future use in terrorist or smuggling activities.

Drug smuggling tends to occur in areas with little government oversight or with significant levels of corruption. Those controlling the drug trade try to limit access to areas where it is occurring; any areas off-limits to journalists should generally be seen as suspicious.

This has for years been the case with the area south of Qaim, as this journalist has reported during her multiple trips to the Iraqi-Syrian border area since it was liberated from IS control in 2017.

The area south of Qaim to Rutba is mostly controlled by forces under and linked to PMU western Anbar commander Muslih.

In an interview last year, Border Ports Authority chief Omar al-Waeli had told this correspondent that “guns, ammunitions and rockets used to pass through the border crossings,” creating problems for security across the entire country, and “the situation has vastly improved since” Kadhimi had been sworn into office in May 2020.

An Iraqi security source working in Qaim told this journalist in an interview in Erbil in late April that armed groups operating on both sides of the border in Qaim had seen a reduction in “brazenness” in recent months in terms of demanding bribes from civilians and in Iran-linked factions’ cross-border smuggling of weapons and drugs.

He claimed, however, that this had come after and as a result of the May 2021 arrest of Muslih.

Muslih had been charged under the country’s anti-terrorism law but was released almost two weeks later, reportedly due to a lack of evidence. Muslih has in previous interviews with this journalist called for a fatwa against America.

“Muqawama,” or Iran-led “resistance,” factions such as Kataib Hezbollah and Kataib Sayyid al-Shuhada have government-incorporated brigades officially answering to Muslih in that area. The factions themselves have long been supported by Iran’s Islamic Revolutionary Guard Corps (IRGC).

Both forces under Muslih and ones advised by the US-led coalition are taking part in the operation in western Anbar.

The Qaim security source added that drug smuggling was a major problem in his area but that more arrests and captures were a good sign, as previously the crimes had simply gone unhindered.