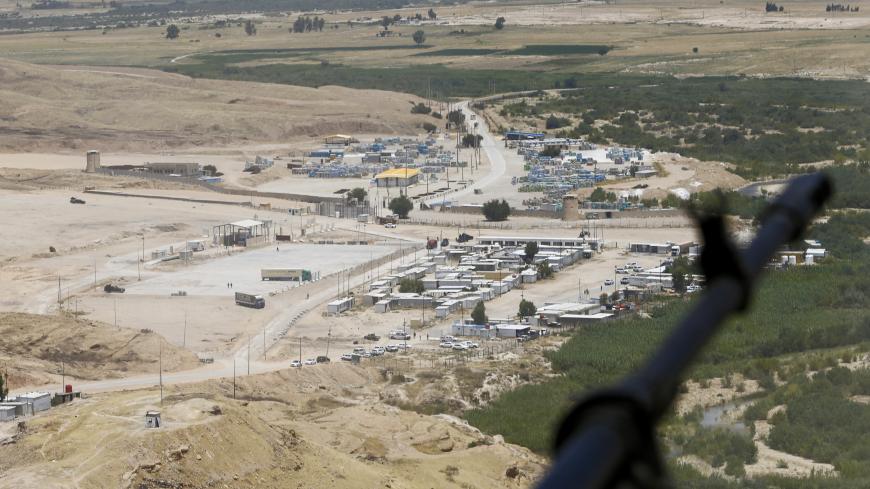 An aerial view shows the Mandali crossing between Iraq and Iran on July 11, 2020. - THAIER AL-SUDANI/AFP via Getty Images

TREBIL, Iraq —  On Iraq's western edge, a border crossing with Jordan is surrounded by desert that has long been difficult to secure. The same can be said for Qaim, a port of entry further north that borders Syria. And along Iraq's eastern border with Iran, there is the Zerbatiya crossing, where the Hamrin mountains — known for decades as a favorite hideout of insurgent groups — stretching to the Salahuddin province are silhouetted against the horizon.

The Rutba area, along the main road between Trebil and Anbar province's capital, Ramadi, has been the site of several terrorism-linked incidents in recent weeks. A Jan. 29 confrontation southwest of the city between border police and three men, one of whom was wearing a suicide belt, resulted in the attackers' deaths and the wounding of a policeman.

The following day, a spokesman for Prime Minister Mustafa al-Kadhimi said a top military official of the Islamic State, Muthana Shatran al-Marawi, had been killed in the western desert area of the Rutba district.

Kadhimi pledged upon being sworn in last year that he would fight corruption and bring weapons under state control. Ensuring that the country’s borders are well-organized and protected is key to both of these aims.

Kadhimi’s Border Ports Authority chief, Omar al-Waeli, is widely seen as having successfully implemented a number of anti-corruption measures that have also led to better organization and greater revenue at some border ports of entry.

Though much trade with Iraq depends on the ports in its oil-rich south, its border crossings with its eastern and western neighbors also see significant imports and exports and are key to stemming income streams for terrorist groups and trafficking in general.

The road from Baghdad to Trebil took this journalist an uneventful four hours by road Jan. 23. However, border officials there said that there had been clashes between the Islamic State and the army along a certain point in the road not far from Rutba earlier in the morning. They said no one had been hurt and that this is “normal” for the area. Trebil itself is surrounded by largely uninhabited desert land.

Col. Yassar Mishan Telfah from the Trebil border port authority told Al-Monitor in an interview that prior to the current director’s appointment last year and Kadhimi’s decision to send military forces to protect the border crossings, “most border crossings were without protection. There was a lot of interference and a lot of corruption, with no real state control over them.”

He stressed that there had been a sizable increase in customs revenue at the Trebil border crossing in the second half of 2020 compared with the same period in the previous year and that this increase had been achieved despite the COVID-19 pandemic and restrictions linked to it.

An Amman-based Iraqi national involved in the cross-border car trade told Al-Monitor that the procedures at the crossing had also sped up considerably in recent months.

Telfah had previously been posted at the Qaim border point with Syria further north. He noted that that crossing differs greatly from Trebil in that Qaim is in the middle of a town, “and of course that means there will be some problems,” he said in terms of security.

When Al-Monitor visited the border port office in Qaim the following day, there was no electricity.

The director of the Qaim border port, Ali Mahmoud Hassan, told Al-Monitor that IS cells operating outside the city had knocked down three electricity pylons in recent weeks and that the city was for the time being entirely dependent on generators and trucked-in fuel, making life hard for many in the area.

He noted that this particular border crossing was destroyed by years under the Islamic State and further damaged in the operations to liberate it. This journalist reported from those late-2017 operations and had photographed the heavily damaged crossing during one of the region’s not-unusual dust storms, the IS flag on the Syrian side of the border. On Al-Monitor’s Jan. 24 visit, a large photo of Syrian President Bashar al-Assad could be seen behind a line of trucks getting papers checked to enter Iraq.

Hassan noted that the goods coming through consist mainly of produce and household goods and that more is imported from Syria than exported. He said this crossing had been hit worse than others by the COVID pandemic and security issues.

Recent years have seen repeated airstrikes by the United States and others on positions held by armed groups linked to Iran's Islamic Revolutionary Guard Corps and operating on the Syrian side of the border near Albu Kamal. US airstrikes on Dec. 29, 2019, on brigades from the Iran-linked Kataib Hezbollah that had been incorporated into the government sparked major tensions.

The Zerbatiya border crossing on the other side of the country in Wasit province is one of the busiest federal border ports with Iran alongside the Mandali crossing further north in Diyala. The Kurdistan Region of Iraq controls border crossings with Turkey and Iran as well.

In the Zerbatiya border ports office on Jan. 15, the head of the office, Col. Amjed Hamid Lihftan, was meeting with several people including two members of the country’s Popular Mobilization Units (PMU).

Lihftan, who speaks fluent English and trained at one point with the American forces, told Al-Monitor that a variety of forces were present at the various border crossings but that the largest and strongest was the army and “in the case of any problems, they intervene swiftly and forcefully.”

He noted that the PMU, many of whom have historic links to Iran, can be useful on Iraq’s border with its eastern neighbor and that though they are not present on the other side of the country at the border ports themselves, “they have checkpoints and secure areas not far from them” near Trebil and Qaim.

Work on the site of a large, architecturally complex new border crossing replacing the current one in Zerbatiya was stalled at the time of Al-Monitor’s visit.

Waeli told Al-Monitor in a Jan. 17 interview in Baghdad that the work on the new facilities had run into legal and administrative issues but that he expected it to resume soon.

And though it was true that customs revenue had risen significantly since Kadhimi sent reinforcements to the country’s key border crossings, he said, the main objective had been to stop the illicit importing of weapons by groups uncontrolled by the state.

Waeli noted that when he took the position of Border Ports Authority chief in February 2020, he had asked for a greater military presence. Kadhimi, he said, had agreed on the need and delivered shortly after he was sworn in as prime minister in May last year.

He stressed that “guns, ammunitions and rockets used to pass through the border crossings,” creating problems for security across the entire country, and “the situation has vastly improved since then.”