The Islamic State has conducted several attacks in recent weeks on the Sunni-majority provinces of Anbar and Salahuddin. 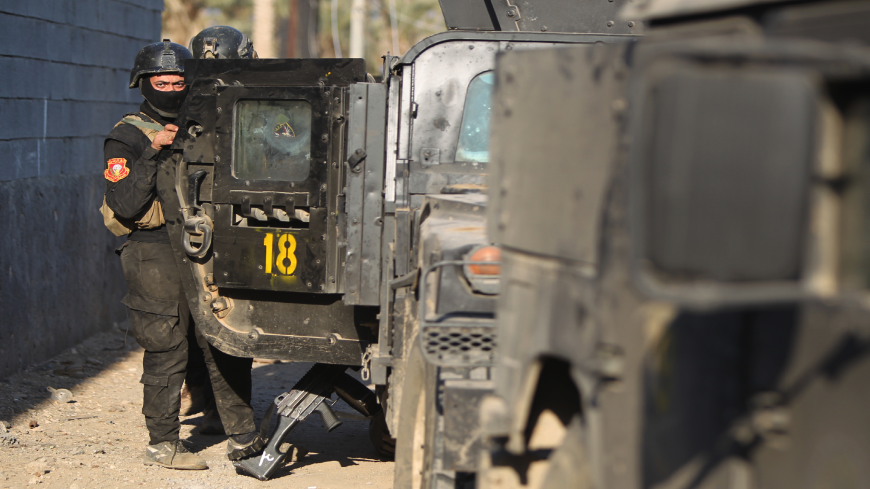 Members of Iraq's elite counterterrorism service patrol suburbs as they progress towards al-Sajariyah area, east of the city of Ramadi, the capital of Iraq's Anbar province, 120 kilometers west of Baghdad, on Feb. 3, 2016. - AHMAD AL-RUBAYE/AFP via Getty Image

ERBIL, Iraq — The Islamic State (IS) has in recent days claimed responsibility for a rocket attack on the Siniya oil refinery in Iraq’s northern Salahuddin province and for the killing of soldiers, policemen, local officials and others in neighboring Anbar.

In Shirqat, also in northern Salahuddin province, the bodies of two villagers were found beheaded on Nov. 28. The attacks in Anbar occurred a few days after a border crossing with Saudi Arabia reopened following a 30-year closure.

Though far from holding any major territory, the transnational group — which Iraq announced the defeat of within its borders three years ago — continues to operate in areas that insurgents have used as hideouts for decades, such as the Hamrin Mountains and desert areas.

Some major figures seem to be able to elude capture for significant periods. Recent arrests in Iraq’s largest cities have included that of IS’s “administrative chief" — a man known as Abu Naba — who had reportedly been responsible for getting funding for the group and relaying messages between members. Naba was arrested at the Baghdad airport in October. Also, a woman was arrested Nov. 27 in Mosul; she had reportedly been working with IS when it was in control of the city. Victory against IS in Mosul was declared in July 2017 and in Iraq in December 2017.

In announcing the arrest of Naba on Nov. 23, the spokesman for Iraq’s Counterterrorism Service (CTS) told the media the CTS had long been following him and that he was arrested as he was getting into a taxi upon leaving the airport. How and why he was able or allowed to get past airport security was not immediately clear. Requests to security officials for more information on the identity of the man and the arrest had not been answered by the time of publication.

The CTS is a force that gained hero status during the fight against IS. Since Prime Minister Mustafa al-Kadhimi took office in May, it has also been tasked not only with arresting IS members but also with, on occasion, arresting members of Shiite armed groups responsible for attacks on facilities in the capital.

On Nov. 30, a CTS operation in the Makhmour mountain range killed six IS operatives, according to Kadhimi's spokesperson, Yehia Rasoul. Three were killed in direct fighting with the CTS, and three were killed by international coalition airstrikes. One officer sustained minor injuries, Rasoul said in a tweet.

The international coalition has drawn down its forces in the country significantly this year and has repeatedly stated that the reason is the reduced need for its presence in the country.

The international coalition's official military spokesman, Col. Wayne Marotto, told Al-Monitor in a Nov. 30 emailed response to questions that the coalition “has not observed any indication of a resurgence. Daesh (IS) has been territorially defeated, their leadership, network and resources significantly degraded. Daesh is no longer able to sustainably occupy any territory in Iraq and Syria. They now operate as a low-level insurgency, comparable to or at a lesser extent than al-Qaeda in 2010, conducting opportune attacks with less complexity and lethality in order to maintain a resemblance of tempo and relevance.”

He added that Iraqi security forces and the coalition “are proactively interdicting Daesh sleeper cells, caches, temporary camp bases, finances and key personnel. Daesh is hiding out in caves, and with our partner ISF, we are bombing their hideouts. As long as Daesh still poses a clear and present danger to the security of Iraq and northeast Syria, we will continue to strike them.”

On Nov. 24, he cited the figure of 10,000 IS members left in Syria and Iraq in statements to the media after a press conference in northeastern Syria.

Marotto declined to provide specific information to Al-Monitor on the number or location of recent coalition airstrikes in Anbar, Iraq’s westernmost region marked by vast desert land and wadis as well as a shared border with Syria, Jordan and Saudi Arabia.

Iraq reopened its border with Saudi Arabia at Arar in the southern part of the province on Nov. 18 for the first time in 30 years. In 2015, current Prime Minister Kadhimi wrote an opinion piece for Al-Monitor claiming that “Iraqi-Saudi relations are the main key to the problems and solutions of the crises in the Middle East. The rupture and hostility between the two sides helped promote the positions of extremist groups.”

In the Nukayb district in which the Arar border crossing is located, IS seems to have reacted to the reopening of the border by stepping up attacks. A Nov. 28 attack in al-Kasra, a town on the main road running northward toward Rutba, left one local official and several Iraqi soldiers dead.

A policeman had been killed on Nov. 23 in the Rutba district when gunmen fired on his vehicle.

A security source from western Anbar told this journalist via WhatsApp on Nov. 29 that the key Iraqi-Syrian border city of Qaim had been calm in recent weeks, but that a new IS cell in the city of Heet further east was of concern, as was the entire area around Rutba south of Qaim.

Meanwhile, reports that an Iranian Revolutionary Guard commander and three men traveling with him had been killed by an airstrike on the Iraqi-Syrian border began circulating early Nov. 30. One military source told Al-Monitor he had received information about the incident but could not confirm it.

Reuters reported Dec. 1 that security and militia officials had confirmed the news and claimed that the vehicle had been transporting weapons from Iraq into Syria and had been hit on entering Syrian territory. The bodies were being taken to Baghdad on Monday, a military source told Al-Monitor. The incident, if confirmed, was likely near Qaim or just south of it, as armed groups linked to Iran that continue to cross the border tend to operate in this area.

Pro-Iran factions were strongly against the reopening of the border crossing with Saudi Arabia, with one issuing a statement saying that “intelligence cadres of the Islamic Resistance are following all the details of the Saudi enemy's activities on the Iraqi border.”