Senior Islamic State leader detained in US raid in Syria

A senior IS leader was detained by US-led forces during a pre-dawn raid in northern Syria on Thursday. 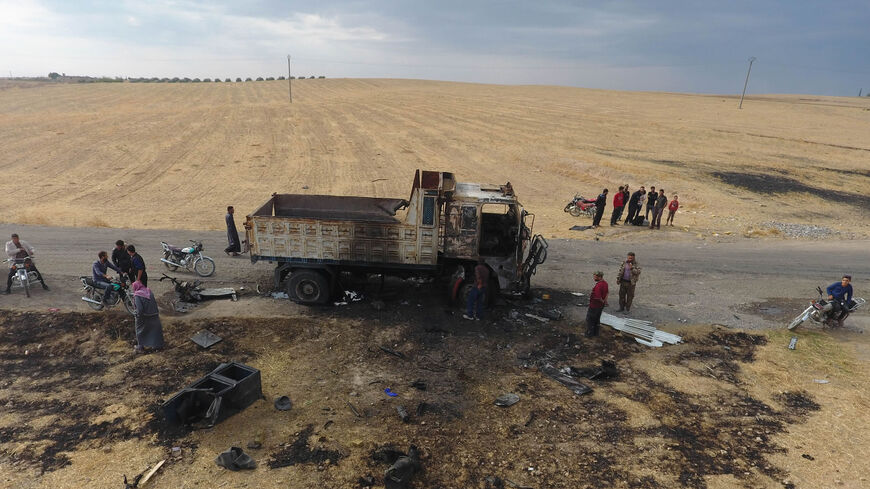 An aerial picture shows Syrian locals near a destroyed truck at the spot where Abu Hassan al-Muhajir, Islamic State spokesman, was reportedly killed in a raid in the village of Ayn al-Bayda near Jarablus, Syria, Oct. 28, 2019. - Aref Tammawi/AFP via Getty Images

A senior Islamic State (IS) leader was detained by the US-led coalition during a helicopterborne, pre-dawn raid in northern Syria on Thursday.

Hani Ahmed al-Kurdi is believed to be “an experienced bomb maker and facilitator who became one of the group’s top leaders in Syria,” the US-led coalition said in a statement. Local reports suggested the raid occurred southwest of the town of Jarablus, in an area controlled by Syrian opposition forces backed by Turkey.

“There were no civilians harmed during the operation nor any damage to coalition aircraft or assets,” the statement read.

Why it matters: The raid is the latest blow to IS’ leadership. The jihadist group’s previous leader, Abu Ibrahim al-Hashimi al-Qurayshi, died during a US Special Forces raid in Syria's Idlib province, just miles from the Turkish border, in February.

The group’s first leader, Abu Bakr al-Baghdadi, blew himself up during an October 2019 Delta Force operation also in Syria’s far northwest near the Turkish border. Both US operations resulted in civilian deaths.

IS was driven largely underground after its self-described caliphate was encircled by the US-led coalition and its Syrian Kurdish partners at the Battle of Baghouz in March 2019.

The death of Qurayshi came several days after more than 300 IS agents launched a bloody attack on a jail complex holding thousands of IS war prisoners in Hasakah in January.

More than 60,000 IS family members and some 10,000 suspected former fighters remain interned in makeshift facilities across northeast Syria with no sign of international initiative to put them on trial, despite warnings by Kurdish and American officials that the arrangement is not sustainable.

US officials said at the time that Qurayshi’s death dealt a major blow to the jihadist group, but a recent Pentagon report suggested it has had little effect on the group’s organizing capabilities, which remain at the level of a low-level insurgency focused in rural areas of Iraq and Syria.

"This was a complex operation that resulted in success," Mulroy told Al-Monitor. "Great job by our coalition partners, the men and women of US special operations and intelligence."

Turkish officials claimed last month to have captured IS’ newest leader, Abu al-Hassan al-Hashimi al-Qurashi, without firing a shot during a police raid on a house in Istanbul in March. American officials have not confirmed the claim.

What’s next: Expect more details on the raid to emerge in the coming days.

The operation comes amid threats by Turkey’s leadership to launch another military incursion against the US-backed Kurdish-led alliance of militias in northern Syria.

US officials have warned such a move would destabilize the war-torn country’s fragile cease-fire lines and disrupt further operations against IS, as well as exacerbate Syria’s humanitarian crises.