Despite ongoing war, is trade between Turkey, Syria rebounding?

As the number of Syrian companies set up in Turkey increases, the trade between the two countries is returning to prewar levels. 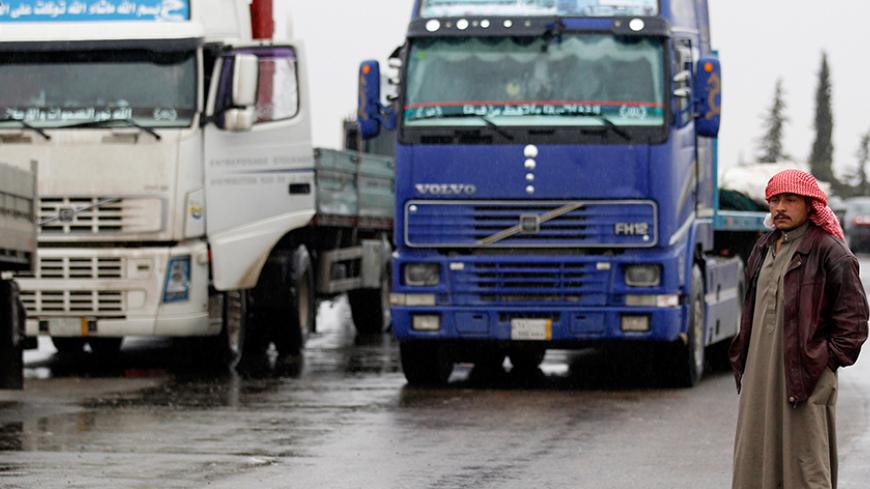 A driver stands next to the trucks lined at the Oncupinar border crossing on the Turkish-Syrian border in the southeastern city of Kilis, Jan. 13, 2012. - REUTERS/Umit Bektas

It is mind-boggling how trade in Syria continues despite the ongoing civil war with massive human and material losses.

Although after the onset of the civil war in 2011 warm relations between Syria and Turkey had come to an abrupt halt, that is about to change. A substantial portion of the more than 2 million refugees are expected to stay in Turkey, even after the war ends. Concurrently, Syrian businessmen are settling down and Syrian-owned or partnership companies prosper.

According to the Commercial Register, published by the Turkish Union of Chambers & Commodity Exchanges (TOBB), up until the end of November 2010 there was no Syrian-owned company operating in Turkey. In December 2010, the first two companies were set up.

Most of the massive waves of refugees pouring into Turkey headed to the provinces of Sanliurfa, Kilis, Gaziantep, Mardin, Kahramanmaras and Adiyaman in southeastern Anatolia and Hatay, Adana and Mersin in the Mediterranean region. Naturally, such a major demographic tremor affects the socio-economic structures of any region.

According to the TOBB data, 417 companies were set up by foreigners in September 2015, 144 of them by Syrians. Between January and September, foreign investors established 3,736 corporations and limited companies in Turkey; 1,148 of them, some one-third of the total, were set up by Syrians.

The total capital of these Syrian companies amounts to about $59 million. Gaziantep, with its developed industrial base, was the main source of exports to Syria, Iraq, the Gulf states and the entire Middle East. Although the economy of Gaziantep and other provinces of the region initially experienced negative effects of the waves of refugees, current economic data shows that Syrian businesses are having a positive impact on the economy of the region.

These days, one in every six companies established in Gaziantep and one of three in Kilis and Sanliurfa belong to Syrian entrepreneurs.

According to a study by the Economic Policy Research Foundation of Turkey, a subsidiary of the TOBB, as a result of rapid growth of the Syrian companies in southeastern provinces Istanbul has been replaced as the center of exports to Syria.

Exports to Syria that had reached $1.9 billion with meteoric progress in economic and commercial ties began to decline after 2011 because of the violent civil war. Nevertheless, by 2014 it was back to a level of $1.8 billion. Turkey’s exports were declining in all other markets but kept rising in Syria.

According to October 2015 figures released by the Turkish Exporters Assembly, Turkey’s overall exports fell by 1.5% while Gaziantep’s exports rose by 4.8%. Similar increases were recorded in other regional provinces such as Adana, Mersin and Hatay.

Former Minister of Economy Kursat Tuzmen told Al-Monitor, “We should not be surprised if within the next five to 10 years we see influential, prominent Syrian businessmen as part of the Turkish business community.” Tuzmen is known for devising the “Trading With Neighbors” strategy of the Justice and Development Party governments in 2002 and 2007.

He said, “Syrian refugees are best integrated in Gaziantep. We had launched our 'Trading With Neighbors' program when our businessmen in Gaziantep, Hatay and Sanliurfa started trading with their relatives and friends in Aleppo, Homs and Damascus. The Syrians escaped to Turkey with whatever they could carry, but they still have relatives back in Syria who are getting involved in commerce, hence the return to the earlier days of lucrative trade.”

According to Tuzmen, throughout history, the Syrians and Lebanese have been successful traders. “It is in their genes. I remember how after the Soviet empire collapsed, the Russians poured into Turkey to buy whatever they could find and carried [their purchases] back home in suitcases. We tried to facilitate their efforts. Now most of them have become serious businessmen and importers, and the small-scale Turkish vendors who provided them with goods have become exporters. I see the same happening with the Syrians and believe we should help them,” he said.

As the Syrian banking system is paralyzed, most of the trade is on a cash basis. The money is transferred by trusted couriers. That's why it is very likely that the money circulating in these unrecorded trade transactions is far above the officially registered figures.

Businessman Zafer Ersoy from Adiyaman emphasized it has been unfortunate for his city to be frequently linked to the Islamic State terror. He also said the Syrians have brought a real vitality to the economy of his province.

“Syrians sometimes set up and register their own companies. Many times they become secret partners. They bring large amounts of money, and they don’t want their partnerships to be publicized; they register their companies in the names of their relatives in Turkey. I think there are actually more companies than recognized by the TOBB,” Ersoy said.

He added, “Although they mainly operate in foodstuffs and the ready-to-wear sectors, some are entering the construction and energy fields. Syria has been destroyed. If a solution is found there will be an extensive construction market, as Syrian contractors are slowly emerging and setting up their own companies. In the energy field, they are becoming partners to operational hydroelectric power stations and investing in new ones.”

In short, although there is a deterioration in political relations between the two countries and a possibility of Turkey becoming further involved in a military intervention in Syria along with the US-led coalition, trade between Syria and Turkey is set to return to what it used to be.