The amount Turkey has paid for the Iraqi and Syrian crises in the last four years has reached over $16 billion. 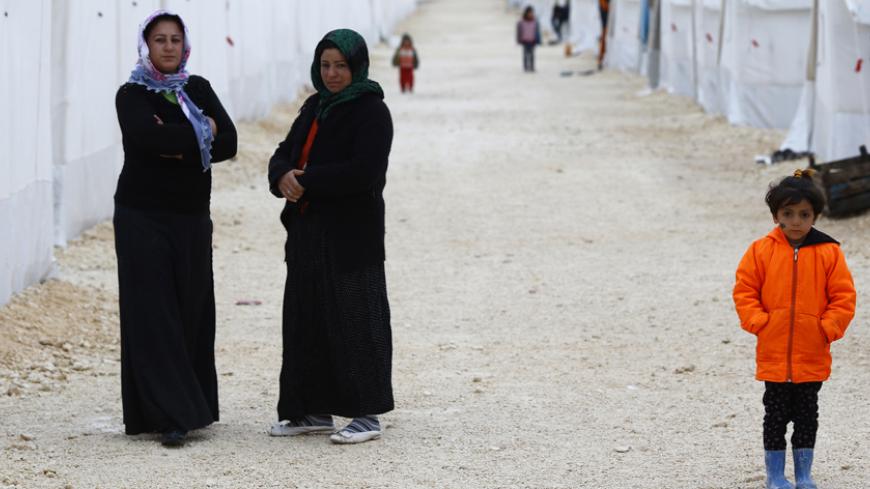 Kurdish refugees from the Syrian town of Kobani stand in front of their tent at a refugee camp in the border town of Suruc, Jan. 31, 2015. - REUTERS/Umit Bektas

The main opposition Republican People’s Party (CHP), which has been criticized for not conducting effective opposition to the government’s policies in Iraq and Syria, has released a new report that says the amount Turkey has paid for the two crises in four years has reached $16.56 billion.

The report was released by CHP World Business Group, an organization created by the opposition party for a fact-finding mission that would determine the situation of economy and prepare reports for the party platform. With the June election approaching, the CHP has adopted an aggressive work platform to break its stagnation. CHP World Business Group’s works in the field and its report are an impressive result of this since October 2014. The group is made up of 24 deputies in the parliament. Most of the members have business or academic backgrounds focused on economics.

According to the report prepared by CHP Business World Group — based on research in provinces of Gaziantep, Sanliurfa, Mardin, Adana, Mersin and Hatay — some $5.5 billion has been spent from the public budget for the refugees, who total nearly 1.7 million according to official figures and more than 2 million according to unofficial counts.

Adding the declines in exports and in tourism revenues, the loss to the economy has reached serious levels. Exports to Syria in 2011-14 were forecast at $10.5 billion. But with the war, exports remained at $4.5 billion, that is, Turkey lost $6 billion of exports in four years. Chaos in Iraq in 2014 also slashed exports. The target figure for 2014 exports to Iraq was $14.2 billion but it remained at $10.7 billion. The total of losses in exports to these two markets from 2011 to 2014 was $9.5 billion. Tourism revenue losses after Syrian tourists stopped coming over four years were $1.6 billion.

Turbulence along Turkey’s southern borders also endangered Turkey’s access to markets in the Middle East and Eastern Mediterranean, with major losses accrued to transport and logistics sectors. Companies that expanded their truck fleets by borrowing money in times of good relations with Syria either went bankrupt or sold their vehicles at a loss. There were efforts to find alternative routes to overcome the loss of transit routes through Syria. Roll-on/roll-off ferry lines were established through Egypt, but those alternative routes are being lost as well.

The Red Sea Port Authority announced the termination of the Accord with Turkey on Cooperation for Ro-Ro and Land Transport as of April 23.

The outlook for the refugees is dismal. Syrian refugees have scattered to all provinces of Turkey except nine (out of 81). Only 270,000 of them are accommodated in refugee facilities. The provinces most affected by this intensive refugee flow are the ones closer to the border. These provinces are struggling to maintain their public services. Initially, Turkish citizens extended their traditional hospitality to Syrian refugees but as the crisis was prolonged, this attitude frayed and in some cases led to disturbances. Rents and property prices increased enormously in provinces where Syrians are in big numbers. Unemployment rose particularly in Sanliurfa and Mardin. About 500,000 of the refugees are of school age, but only 175,000 are getting education, creating a lost Syrian generation in Turkey.

Turkey also had to cope with security threats. The report noted: ‘’The wars in Iraq and Syria have turned our southern borders to spheres of domination by radical terror organizations. This situation, which can be termed as ‘Peshawarization’ of our borders, is a serious threat to our country.” It said the Syrian crisis will have diverse negative consequences for Turkey in the long run.

CHP then listed some proposals to mitigate the crisis:

CHP Deputy Chairman Faik Oztrak, who chaired the group that prepared the report, said: “Initially people ignored the mistakes in foreign policy by saying they are busy with their work and by making a living. But now they all began to understand that the mistakes in foreign policy can hurt the people living in the country. Commercial and industrial chambers in the region are glad that their voices have been heard thanks to this report. They told us: ‘We made serious investments saying tourists are coming from Syria and the foreign trade is going well. But those who were tourists yesterday have suddenly become refugees.’ A mistaken foreign policy has backfired as a cumbersome economic cost. True, we have structural barriers to our economic growth but the foreign policy has also emerged as a negative factor. When we were [once] saying ‘zero problems with neighbors,’ today we have zero neighbors.”

When asked why two countries that are holding Ankara responsible for their crises should allow Turkey to benefit from the opportunities that are likely to emerge for their reconstruction, Oztrak replied: “For one thing, the Syrian and Iraqi governments are not holding Turkey responsible, but the AKP [Justice and Development Party] government. In that sense nobody is making out an invoice to Turkey. With a change of government in Turkey, a new page will open in our relations. As the CHP, our priority is first to build peace. When we abandon our current policies and contribute to peace, of course there will be commensurate opportunities. When we achieve an environment of peace, the refugees will safely return to their homes. The government constantly distorts what we say about refugees.”