Turkish exports to Syria revived under shadow of war

Turkey remains Syria's leading supplier of goods despite the ongoing war, with exports standing at some $1.4 billion last year. 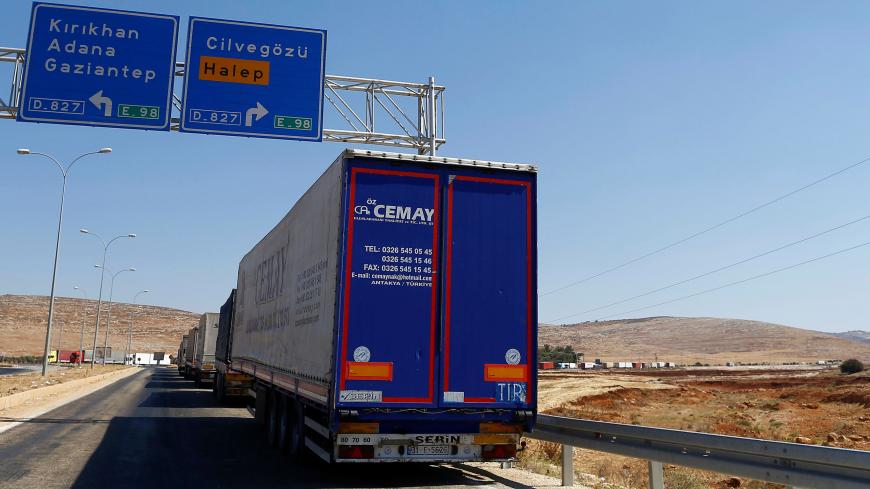 The seven-year war in Syria has dealt a heavy economic blow to Turkish border provinces, but, as wars often do, it has created its own economy and traders. Since 2013, when rebel groups seized control of border crossings on the Syrian side, Turkish exports have perked up, benefiting also from Turkey's military intervention in northern Syria.

After the eruption of the war, bilateral trade hit its lowest point in 2012, when Turkey's exports plunged to $501 million and its imports from Syria went down to $67 million. In 2010, when the ties still flourished, Turkey's exports had stood at some $1.85 billion, while its imports were worth $663 million. Last year, Turkish exports to Syria reached nearly $1.4 billion, while imports from Syria, which are subject to official permission, amounted to only $71 million. The export average of the past three years — $1.3 billion — points to a notable revival in Turkish sales to Syria, though without a corresponding increase in imports, whose average remains at no more than $70 million.

The main products flowing to Syria are cooking oil, flour and flour products, cement, iron and steel, hygiene and cleaning products, poultry and automobiles. Despite the modest level of trade, Turkey remains Syria's main supplier, and, together with China, accounts for more than a half of Syria's imports. Turkey is also the fourth-biggest buyer of Syrian products, importing mostly cotton, fruits and vegetables, olive oil and cooper and aluminum products.

Representatives of industry and trade chambers in Gaziantep and Kilis, two of the Turkish provinces bordering Syria, told Al-Monitor that the Turkish goods go mostly to regions that came under Turkish control with Operation Euphrates Shield and their environs, including Azaz, al-Bab, Jarablus, Tell Abyad, Manbij and the Aleppo countryside. Turkish goods are often available in Aleppo city as well.

Among the 13 border crossings with Syria, the trade goes through the Cilvegozu crossing in Hatay province, the Oncupinar crossing in Kilis and the Karkamis and Cobanbey crossings in Gaziantep. Though official ties remain severed, some Turkish goods are occasionally shipped also from the Tasucu port in Mersin to Syria's port of Tartus.

Meanwhile, the border crossings at Cizre, Girmeli (Nusaybin), Senyurt, Ceylanpinar, Akcakale, Mursitpinar, Islahiye, Karbeyaz and Yayladagi remain closed, controlled either by Kurdish groups or the regime on the Syrian side.

In the absence of diplomatic ties and with rebel groups controlling the active border crossings in Syria, Turkish-Syrian trade is conducted through some unconventional means.

An increasing number of Syrian traders based in Turkey have become involved in the trade, accounting for an estimated 20-30% of the exports to Syria.

As of May, 1,854 Syrian-owned businesses were officially registered in Gaziantep. They included 1,425 businesses registered with the chamber of commerce, 355 with the chamber of traders and artisans and 74 with the industry chamber. In the Kilis Chamber of Trade and Industry, Syrian companies and entrepreneurs represent 140 out of 1,400 members. About 30% of Syrian companies are set up in the field of exportation and importation. In Gaziantep alone, the number of work permits issued to Syrians stood at some 3,000 in 2017, up from about 700 in 2015, and reached 1,227 in the first five months of this year.

The figures indicate that Syrians have been rather successful in integrating into business life in Turkey. To facilitate the process, the Gaziantep Chamber of Industry has launched professional training centers. Yet Syrians continue to face hardships with banks and other financial institutions, as their transactions generate tougher scrutiny, especially when they make transfers to pay for imported goods. Also, work-permit applications take a long time to process.

Yet given the unconventional aspects of the current trade, Turkey-based Syrian traders have their own advantages in the export of goods to Syria. Thanks to their existing networks in Syria, they are able to deliver goods to relatives or other trusted people in buffer zones, which eases the problem of money transfers in what are often open-account transactions.

Other difficulties include the official permissions that Turkish authorities require for imports from Syria. Also, Kilis — where Syrian refugees outnumber the local population — is without a customs authority, which means that traders exporting goods to Syria have to take their shipments to neighboring Gaziantep first and then return to the border crossing in their province.

Can the trade expand further under the current circumstances?

Kenan Mortan, a senior Turkish economist who closely follows the economic situation in border regions, believes that a further increase is unlikely as long as the war in Syria continues.

"Wealthy Syrian migrants brought in capital and made investments [in Turkey]. I have to say that the business knack of the Gaziantep people, which dates back to the 15th century, was also very effective. But one should not expect the figures to rise further," Mortan told Al-Monitor.

"Going beyond the current level can become possible only with the return of peace. And this means not only an end to the fighting, but also the normalization of Turkish-Syrian ties," he said. A further expansion of trade would require the resolution of banking hitches, the restoration of ties between central banks and the empowerment of local courts in the settlement of legal issues in bilateral commerce, he added.

No doubt, business people in border regions feel a great nostalgia for the period from 2007 to 2011, when Turkish-Syrian ties were put on track and began to flourish.

Yearning a bygone era are also the many locals who used to earn their bread by smuggling goods across the border, where security walls have now been erected. An official from the Kilis Chamber of Trade and Industry told Al-Monitor that smuggling was now next to zero.

Meanwhile, border crossings controlled by the Kurds on the Syrian side remain closed, preventing further revival in trade. The Turkish government sealed off the crossings to avoid any implication of legitimizing the Kurdish-led "democratic autonomy" in northern Syria and, in a way, to punish the Kurds. Yet, by doing so, it also has been weakening the economies of its own border provinces, where poverty was already rife.

An end to the Syrian war and normalization of ties would certainly come as a huge boost to trade. Turkey's businesspeople — as well as government officials — are looking forward to the reconstruction process in Syria, which would inevitably create a boom in demand. Yet, for all those expectations to materialize, Turkey needs to radically change its Syria policy and open a new page in bilateral ties.