The Syrian war is not only breaking apart the country’s social cohesion, but also its economic unity. 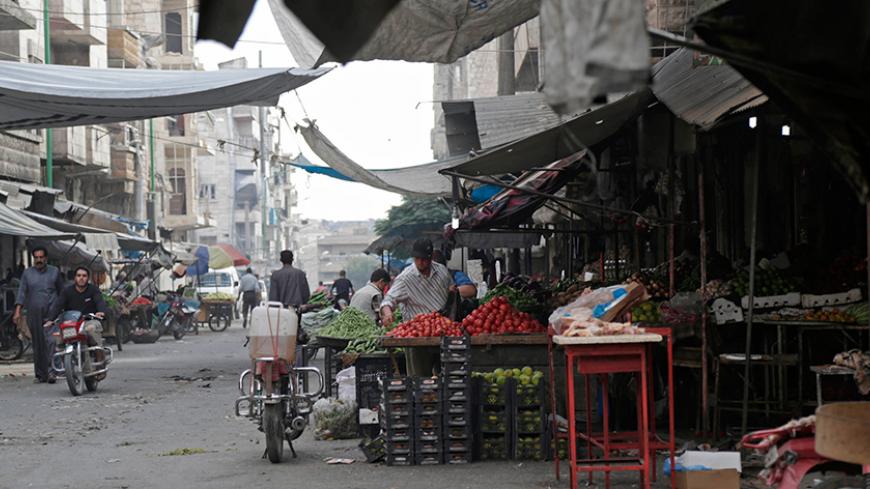 A man sells vegetables and other goods at a market in Maarat Al-Nouman, in the southern part of Idlib province, Syria, Sept. 30, 2015. - REUTERS/Khalil Ashawi

Syria's long-running civil war has left the country in tatters, disrupting the economy and redrawing the trade map. More than 11 million people are either displaced or seeking refuge elsewhere, shifting the centers of power now and for the future.

Syria's economic figures show catastrophic total economic losses from the start of the conflict in March 2011 until the end of 2014 at $203 billion in constant 2000 prices, equivalent to 383% of the country's 2010 gross domestic product ($60 billion), Nassib Ghobril, head economist at Byblos Bank, told Al-Monitor.

The 2015 gross domestic product was around $30 billion, with economic output declining by about 60% compared with 2010, according to a Chatham House study. “Sectors most affected are tourism and industry, with the latter shrinking by 80%,” Syrian economist Jihad Yazigi told Al-Monitor.

According to Yazigi, exports slumped to 67.7 billion Syrian pounds ($257 million), amounting to 10% of 2014 export levels, which totaled about $2.5 billion, pointing to a decline in the country’s production, due to destruction.

Ghobril also expects Syria's economy to shrink by 6.4% annually during the 2015-2019 period due to key infrastructure damage and the steady decline in living standards.

The current status quo has resulted in the emergence of new business figures, as conflict generally benefits specific companies and sectors. During the December 2014 elections at the Aleppo Chamber of Commerce, there were 10 newcomers out of 12 members, and seven out of 12 in Damascus, a phenomenon essentially caused by the exit of the wealthy economic class, Yazigi explained.

Ghobril added that people who also benefit in such a context are those close to centers of power "who can meet consumer-goods shortages."

In times of war, demand also shifts, with the need for basic goods remaining, while luxury or secondary goods are no longer considered affordable.

Production and exports are also influenced by new dynamics taking place in parts of the country falling under the control of different players — in Syria's case, rebels, the Kurdish Democratic Union Party (PYD), the Islamic State (IS) and the Syrian regime.

To further visualize such a division, Yazigi explained that oil, phosphates and agricultural products such as fruits, vegetables and livestock — important export goods — come from the east and northeast of the country, which is under rebel command. Oil fields are located in the areas of Deir ez-Zor and Hasakah, while phosphate mines are east of Palmyra; they are under the control of either the Kurds or IS. The war has resulted in the destruction of the industrial hub of Aleppo, also located in the northeast.

These new divisions have influenced the development of new travel routes. Industrial products — still produced in Damascus, which has replaced Aleppo as an economic center — are sent eastward toward rebel regions, namely Aleppo, Idlib, Raqqa and Hasakah. On the other hand, agricultural and hydrocarbon products travel westward to areas under the control of the regime such as Damascus, the coast area and Homs, Yazigi said.

Segregation of the various Syrian geographic areas means the country’s economy is no longer unified. Industries on both sides of the divide are devolving, while some regions seem to profit from the ongoing conflict and benefit from new riches.

IS is thus not the only entity that has profited from oil trade, as Kurds have also reaped the benefits of the hydrocarbon trade. Largely overlooked by the media, some Syrian oil fields are located in the Kurdish region, namely the Suwaidiyah field, which produced 100,000 barrels per day in 2011. Its output has now fallen by more than 50% to about 40,000 barrels per day, according to Yazigi, who believes the PYD currently exports about 20,000 barrels per day from these fields with a monthly revenue of $10 million. In addition, much of the gas production generated by the Arak, al-Hail and Shaer gas fields are in the hands of IS.

Other areas benefit from the ongoing conflict as well, due to their relative stability. Such is the case with the Syrian coast and the Druze region of Suwayda, which have witnessed little unrest.

Syrian investments are marked by their high geographical concentration around areas such as Suwayda and Tartus. Citing the Syrian Investment Agency (SIA), Yazigi said that in the first half of 2015, 33 investment projects were given licenses for a total value of 7.4 billion Syrian pounds (about $28 million), witnessing a sharp drop compared to the same period in the previous year — with a capital value of 39.7 billion Syrian pounds (about $200 million).

The Syrian economist estimates that about 75% of total investments — which amounted to 25 projects, mostly industrial — were made in the coastal region and Suwayda. The latter area was able to attract 16 projects alone, due to its stability and the presence of a large internal displaced population.

Building on the appeal of coastal regions in the current context, Wahib Merei, president of the Chamber of Commerce and Industry of Tartus, asked that his province be classified as a free zone, Yazigi said.

Conversely, the cities of Damascus, Aleppo, Homs and Hama — which were able to attract 50% of all Syrian investments in 2010, while Suwayda and Tartus received only 8% — were allocated only a quarter of the total in 2015.

Such changes indicate that the Syrian war is not only breaking apart the country's social cohesion but also its economic unity. It also points to a redrawing of the country’s investment map to the benefit of peripheral areas. The growing independence of these peripheries and new waves of refugees could exacerbate the trend. These economic transformations will undoubtedly weigh on the reconstruction of the country and define the new financial and economic heavyweights of the future.