Exploring the 'other Syria'

Syria’s regime-controlled cities defy the image that outside observers paint of the country and the Assad government. 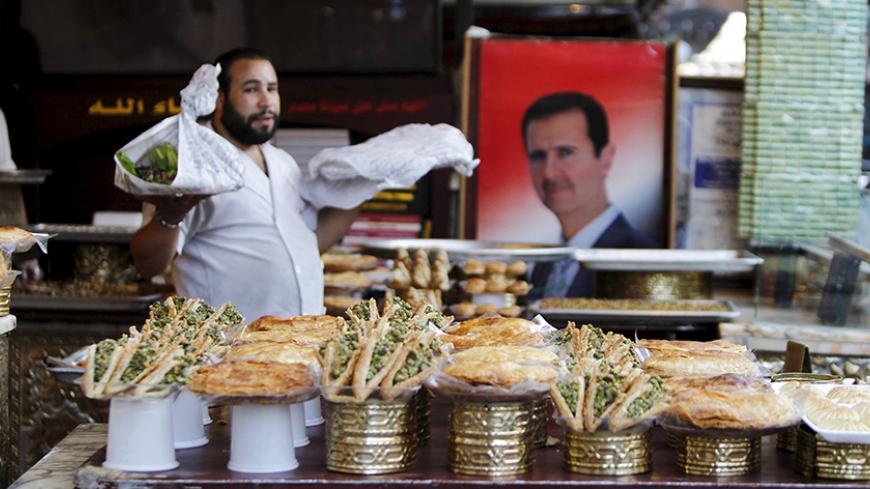 A vendor sells traditional sweets near a picture of Syria's President Bashar al-Assad during the Muslim fasting month of Ramadan in Damascus, Syria, July 8, 2015. - REUTERS/Omar Sanadiki

ALEPPO, Syria — During a recent trip to Aleppo, which self-styled pundits like to call a “Sunni” city, I stopped by the stall of a street vendor, a woman covered in black attire, to see what she had to offer. Filled with Syrian army badges and pins with the Syrian flag along with images of President Bashar al-Assad and Hezbollah leader Hassan Nasrallah, the stall reflected the spirit at the fore – or being brought to the fore — in regime-controlled areas.

Nasrallah posters are not unusual in Homs, a city with a large Shiite population, but in Aleppo, his image adorning walls next to posters of Assad is a sight that defies comprehension. In the “other Syria,” the one we don't hear about, Hezbollah’s support on the battlefield, from Qusair to Qalamoun, has earned Nasrallah a reputation that transcends sectarian boundaries. This was exemplified by my Christian guide, a native of Homs, who sang along enthusiastically when our Alawite driver played a song in praise of Nasrallah while driving us from Homs to Tartus. I also saw it in Baqdash, the famous ice cream parlor in the old city of Damascus whose walls were once covered with photos of famous visitors, including Turkish first lady Emine Erdogan and Jordan’s King Abdullah. Today, the only frame left on the wall holds a thank you letter from Nasrallah for the financial support the establishment has provided to “the resistance.” Asked why the celebrity photos were gone, the shop owner replied, “No one who undermines this country can have their picture on this wall.”

Meanwhile, Assad’s most widely displayed poster features the slogan “We are with you.” Earlier, such displays of veneration could have been explained as an effort to keep the feared Mukhabarat (the intelligence directorate) at bay, but at this time of war, the urge to lionize the leader has deepened.

Criticism of the regime notwithstanding, the citizenry's growing desire to embrace their “Syrianness” and to save the Syrian state seems to have reduced the rift that opened along sectarian fault lines after 2011. In previous trips to Syria, I had observed that many Syrians would frown when asked whether they were Alawite or Sunni. They sensed malice in the question and would answer pointedly, “I’m a Syrian.” The number of such people appears to have markedly increased. Inquiring about someone’s sect was taboo and remains so, but with one major difference: Before, the question would cause annoyance, now it causes anger.

Myriad reasons can be attributed to why criticism of the regime has toned down while the emphasis on Syrianness has grown. Chief among them are the stories of people who have been attacked, kidnapped, tortured or killed simply because of their sect. Kamal Banqasli, a businessman from Aleppo, is a man with one such story.

During a conversation at a private dinner, Banqasli displayed the scars on his arms and feet as he shared his story. “I was kidnapped by opposition forces. They demanded a ransom of 1 million Syrian pounds [$5,300], which I rejected. Then they tortured me. I had my arms slashed with a knife and two toes broken. The group’s qadi [legal cleric] ruled that I should be executed by gunfire,” Banqasli recounted. “Just as they were about to shoot me, their leader intervened, saying, ‘Hold on, the sentence is canceled.’ He pushed the hand of the executioner down, but the man had already pulled the trigger. The bullet hit my knee instead of my head. It turns out that they had had a discussion among themselves about how I was not with them, but not with the regime either, so they could benefit from me in the future if they spared my life. They kept me bleeding for four hours before handing me over to relatives.”

As with any other war, the Syrian war is one of two different stories. One reflects the consequences of military action — tragic civilian losses, destruction and millions of suffering refugees — and, as such, it is a condemnation of the regime. Its dramatic scale overshadows the story of the “other Syria,” which we rarely hear about, but which explains why the regime remains on its feet.

The pictures of “martyrs” I saw plastered along the streets of Damascus, Aleppo, Homs, Tartus and Latakia speak to how the war has swallowed lives from various communities. In Bab Tuma, in Damascus' old city, a wall displaying pictures of Shiite victims faces a wall displaying pictures of the Christian dead. On Arman Street in Homs, a giant board displays the photos of 1,300 people killed in the conflict — Alawites, Sunnis, Shiites and Christians alike. In Latakia, the obituary notice of a fallen Muslim fighter, inscribed with a Quranic verse, faces one of a Christian victim with a citation from the Bible. In Homs and Latakia, Muslims and Christians living in mixed neighborhoods are at ease with each other’s culture. Visiting the other’s religious shrines or marking religious holidays together is not an uncommon practice. This special fabric of Syrian communities continues to serve as a social glue.

The fantastical belief that Assad will ultimately withdraw to the mainly Alawite coastal strip and create an Alawite state there is met with a big laugh in Latakia, which along with Tartus has become a safe haven for thousands of Sunnis fleeing bloodshed in other areas. I asked Tartus Governor Safwan Abu Saadeh how the city was coping with the influx. “Tartus’ population of 900,000 has doubled. Tartus is now a little Syria,” he said. “People came from Raqqa, Aleppo, Homs, Deir ez-Zor and Idlib. They are all Sunnis.”

Some of the new arrivals are accommodated by the government, while others rent homes with their own means. Many have found work and provide for themselves. Barring occasional rocket fire, Latakia and Tartus retain their relaxed atmospheres. The pressure of the newcomers is not immediately discernible in the streets.

Latakia’s beach offers a good illustration of the newcomers’ profile, refuting the Alawite state scenario. Next to the Ramel al-Janoubi Palestinian refugee camp, the beach resembled a fairground when I took an evening walk through the area. Families had sat down to eat, enjoying themselves. With a Turkish journalist in their midst, refugees from Idlib and Aleppo were eager to slam the Turkish government — and those were the conservative and pious Sunnis. Defying the sectarian narrative, the scene at the beach was like one cheerful brushstroke over a gloomy picture of war.

For Syrians, economic hardship remains a problem as serious as security. Abu Ahmed, a greengrocer in Latakia, said, “The tomatoes and cucumbers are coming from Hama and Homs. A truck from Aleppo used to deliver for 5,000 [Syrian] pounds [$26], now it comes for 100,000 pounds [$530]. The price of diesel [per liter] has increased from 7 [$.04] to 140 pounds [$.74]. Shipping costs have tripled, and sales are down.” At the two marketplaces I toured in Damascus, people voiced a common grievance: Wages have remained the same over the past four years, while food prices have tripled.

The regime’s efforts to alleviate economic stress are noteworthy. The government has continued to pay the salaries of public employees, including those in rebel-controlled areas. Garbage collection and other public services remain in operation. In short, the state continues to function. Even more remarkably, the regime has used its capacity to the fullest to sustain the supply of critical products, such as wheat and flour. Grain produced in the rural areas of Idlib, Raqqa, Aleppo and Hasakah is taken to regime-controlled areas by contracted trucks and shipped to cities via a perilous route, escorted by the military. In other words, the Mukhabarat structure — one of the reasons behind the uprising — is now fortifying the pillars of the regime through crisis management.

Power and water cuts are also serious problems plaguing the population. Power and water have both become weapons in contested areas, with Aleppo being in a particularly dire situation. Here is how the head of the city’s water authority, Mustapha Melhis, described the state of affairs:

Our water reservoirs are 90 kilometers [56 miles] away, in Hafsa, a region held by IS [Islamic State]. In May, they cut the amount of water [supplied] by half. They asked for sterilization tablets although they had them in their stocks. Using this pretext, they cut the water and resumed the supply only after the tablets were delivered. Our engineers are with them and are held as captives. We still pay their salaries. The second aspect of the problem is distribution. The water pumped by IS flows to the Suleiman Halabi and Bab al-Nairab stations here [in Aleppo]. Both areas are controlled by Jabhat al-Nusra, and they are using the water as a weapon to impose their demands. In return for water, they ask for electricity, for instance. Because they attack transformers, power outages occur. When we began using diesel to generate power, they started asking for electricity. To keep the [water] pumping station working, we wanted to send a diesel power-generation unit there via the Red Crescent. They added a condition that the machine should deliver electricity to them as well. We proceeded, but the pumps were switched off anyway. They are now pumping us half of the water. … We are able to supply water only one day per week. The people working with Nusra there are our employees as well, a total of eight people. They are kept in a room and made to work on shifts of four people, banned from using mobile phones. We dispatch teams for maintenance work as well. They are not taken captive because they bring in equipment.

Aleppo Governor Mohammad Marwan Olabi noted, “The power plants are outside the city. Terrorists control two areas from where electricity lines to Aleppo pass. A line of Syria’s general electricity network passes via Zurbi. They keep targeting the power lines. In the north, we have a thermal power plant, which is also held by armed groups. Whenever they want to put pressure on Aleppo, they cut the electricity. And when electricity is gone, the water supply is cut off as well.”

As the war drags on, the Syrian people’s social and cultural fabric has emerged as its strongest hedge against sectarian strife. Although it took a blow in the beginning, this fabric seems to be strengthening anew.