Car dealer and amateur astronomer Hatim Ali Staiti became a warlord and now commands a notorious militia known for fighting for the regime. 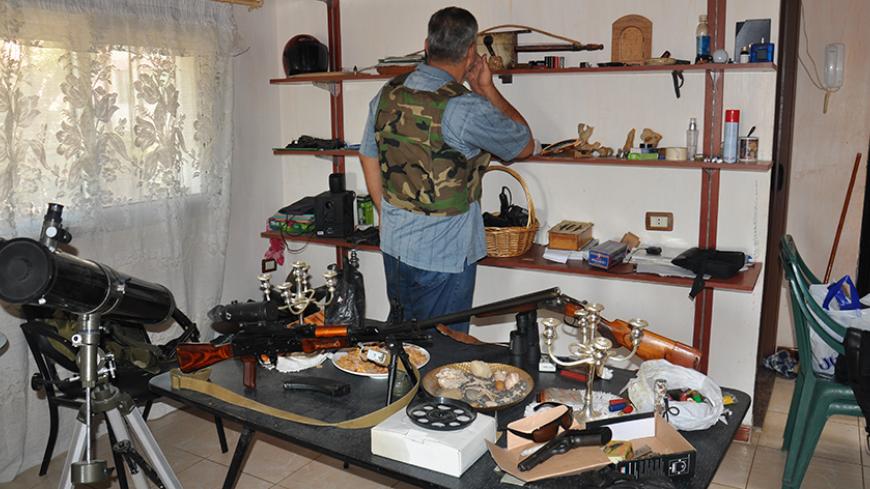 Hitam Ali Staiti at his home in the village of Douheir Taha. - Fehim Tastekin

For Syrian opposition forces, National Defense Forces militia fighting alongside Syria’s regime are the most heinous of foes. The opposition calls them "shabiha," a term used to refer to unofficial militias that support the Syrian regime.

A shabiha member I met in the Akrama neighborhood of Homs, Syria, told me why he took up arms and joined the militia, on the condition that I not use his name or photo. He cited two events that led him to give up driving a taxi and take up arms. First was the murder of Gen. Abdo Khodr al-Tellawi with his two sons and cousin in Homs' Bab Tadmor district on April 17, 2011, while they were going to the general's home in the Zahra district. Tellawi, whose arms and legs were chopped off, was an Alawite — a religious minority of which embattled Syrian President Bashar al-Assad is a member.

The second event came soon after, when a bus headed to Zahra was stopped and 13 people were killed, including three women. One woman was forced to march naked in the streets. All the victims were Alawites, he said. But Alawites did not retaliate, and kept silent for four months. The rebels continued their violent anti-Alawite campaign, cutting off roads and picking up Alawites.

He added: “They even opened fire at funerals. Twice I was able to save myself from their checkpoint by speaking with Sunni Arabic dialect. Of course Sunnis suffered also. They set up their own checkpoints; so did we.”

In Tartus, a man asked me what, as a journalist, I was looking for in Syria. I replied, “I want to observe how the war affected the society and economy.”

He said, “Ah, you are looking for me,” and invited me to his villa in the village of Douheir Taha. In his large living room, alongside memorabilia from Tokyo, Beijing, Moscow and other places, there were guns, bullets, binoculars and field radios.

He introduced himself, saying, “I am Hatim Ali Staiti. I am a commander in the National Defense Committees you call shabiha. I was a car dealer. My hobby was astronomy," he said, pointing to a telescope.

He went on: “You are skeptical. You don’t believe I was a businessman. Come with me."

We went upstairs. He showed me his wall safe, which held three passports, many checkbooks, a little cash and three hand grenades. “This safe was full of money before the war,” he said. Then he opened his computer to show his photographs from the Damascus, Qalamoun, Kassab and Homs fronts.

I asked him how he came to turn from businessman to warlord.

“As the proprietor of Al Zaim company, I had offices in Tartus, Aleppo, Damascus, Raqqa and Idlib. I had 200 people working for me. When the clashes broke out, 250 of my cars were either stolen or destroyed. I went to the [showroom] of Abu Enes at Banias. He had been working with me for five years. The [showroom] was closed. From then speakers of nearby mosque came the calls, 'Come to jihad. Alawites to graves, Christians to Beirut.’

"Suddenly Abu Enes appeared and agitated the crowd against me, saying, 'This man is an Alawite.’ We barely escaped with two of my workers who were with me," Staiti said.

“I called a friend in Hama. We had been working together for seven years. I told him what happened, expecting to hear his sympathy. Instead he said: ‘The time of Alawites is over. We will win this war in one month and take everything, including your wives and daughters.’ I was shocked. I couldn’t believe it.”

Staiti continued: "I couldn’t stand around and wait for them to carry out their threats. So, I set up a group and joined the war. We participate in operations alongside our national army. Today I have 93 fighters. I lost 12 of them in clashes. I was a global traveler enjoying life, now I sleep on mountains. I sent my children away to another villa I own because I had accumulated too many enemies. These people were not religious types. We used to have fun, drink together."

His only dream is to see the end of the war and return to his business. “My money is running out. We don’t get salaries. Only at Zahra, the state gave me a bonus for winning a battle but I distributed it to my fighters. Of course we don’t spend money [on] guns. The ammunition comes from the army."

Staiti was among the many I heard called shabiha in Homs and Damascus who said the uprising had not started peacefully, as some claim. He related one incident: “On April 15, 2011, a group of men stopped my Alawite friend Nidal Jennud, who used to sell fruits and vegetables at Banias. He was ordered to swear at Bashar Assad and the Prophet Ali. His friend with him did it and was let go after a beating. Nidal swore at Bashar but not at the Prophet Ali. He was cut apart with machetes. Until that day, there were no problems in Banias. This was clearly part of a design against Syria. They hired people to demonstrate at Banias, paying them 5,000 Syrian pounds each [roughly $11 at the time]. Al Jazeera was reporting this as an uprising against the regime. Someone came and bought a Kia Rio from me for 700,000 pounds cash [roughly $15,000]. Two days later, mukhabarat [Syrian military intelligence] people came and asked if that person had bought a car from me. Turns out that Qatar had sent money to pay the demonstrators, but this man bought a car for himself with the money. The idiot who was the middle man in the money transfer went to police to complain that he was swindled. That’s how the story came out.”

I asked him about the May 2, 2013, massacres at Baida, where as many as 165 people were killed. In Turkey, government officials had been saying that Assad was cleansing the coastal area of Sunnis to set up an Alawite state. Baida is not far from where Staiti was. He told me about the incident he was involved in:

I was there during the Baida massacre. It is a bit complicated. A six-soldier army patrol came to Baida to detain a wanted person. The patrol was led by Maj. Samir Ammuri. Baida people hid the wanted man and kept directing the patrol to wrong addresses. When the patrol was leaving Baida after an hour of futile searches, they were hit with a roadside bomb. All were hurt. Samir radioed for help. The official imam of the town, Sheikh Ahmed, tried to pacify young people in the village. He told soldiers that he was trying to end the incident and that they should not take action. Soldiers lost contact with the sheikh. They asked our help to recover their casualties. As we were going there, a military vehicle carrying civilian staff working for the army was attacked when crossing the Kous bridge. When we got there we came under heavy fire. We were 60 people. We returned fire and clashed for 45 minutes. A military detachment coming from another direction mistakenly attacked us. Hearing that Sheikh Ahmed, his wife and son were killed, their relatives took up arms. In the village, pro- and anti-state groups began clashing. It got out of hand. Everybody was fighting everybody else. Then army officers came and took control. The village was littered with corpses. You couldn’t tell who was pro-regime and who wasn’t. Why should the state do it? Investigations were carried out. There was no Sunni cleansing. They are still there. Some Sunni families left when the troubles started. Fear was mutual on both sides. But it soon calmed down and people returned to their homes.

I told him that I met a group of soldiers in Daraa and showed the photos from Baida of soldiers kicking bodies and asked why they did it. They were angry with me. Staiti objected, too, saying, “Wait a minute. Those were not bodies they were kicking, but detainees. I was one of the kickers.” He added: "In the Baida protests, they were shouting, ‘Alawites to the graves.’ Alawite villagers heard it and assembled. I was there, too. I was determined to break the heads of 15 people. When we got there, the mukhabarat had surrounded the demonstrators. They tried to calm us down and even detained some of our people. When we started kicking, they too kicked around a bit to appease us. We said the mukhabarat is handling the matter and left. We later heard that the mukhabarat had released the demonstrators and even apologized. We went crazy. The kicking video was taped by one of us. Because of his stupidity the tape was leaked to Al Jazeera.”

To show that he has no enmity toward Sunnis, he shouted to his neighbor who was building a villa next door. The man expressed his gratitude for getting water and electricity for his construction from Staiti, who said his other neighbor was also a Sunni. “Go talk to him, ask what you want,” I was told.

Staiti fiercely rejects the label “Alawite minority regime” affixed to the Assad regime. He said, ‘’As an Alawite, I have no privileges. I couldn’t even get the credit I needed from the bank. The state sets credit limits for different parts of the country. My Sunni neighbor from Daraa got more credit, and quicker, than I could. The state is not granting privileges to us because this is an Alawite area. True, there are powerful Alawites who could get what they want from the state, but there are 10 times more Sunnis who could do the same. In Tartus all the mukhabarat were Sunnis. The governor of Tartus is a Druze, the security chief is Sunni, the police chief is Sunni, and the mayor is Sunni. Today there are more Sunni refugees than the population of Tartus. If there is ever a fight between a local Alawite and a Sunni refugee, that Alawite will be in big trouble."

When I reminded Staiti of speculation that if Assad loses the war, he will set up an Alawite statelet, Staiti said, "We will reject Assad if he does anything like that. We are fighting for all of Syria.”

In Staiti's village, on a green hilltop overlooking the Mediterranean Sea, there is a mosque and a church. People seem to be aware of the bitter results of sectarian conflict. Staiti is not alone in saying that people realized quickly that the sectarian war that engulfed them was fabricated and imposed on them, hence the perceptible change in peoples’ attitudes against sectarianism.