What will be the cost of Aleppo victory for Damascus?

Larger-than-life posters of Syrian President Bashar al-Assad adorn the few walls still standing in the Old City of Aleppo, alongside Syrian flags that have reappeared. What will be the political invoice for the destruction? 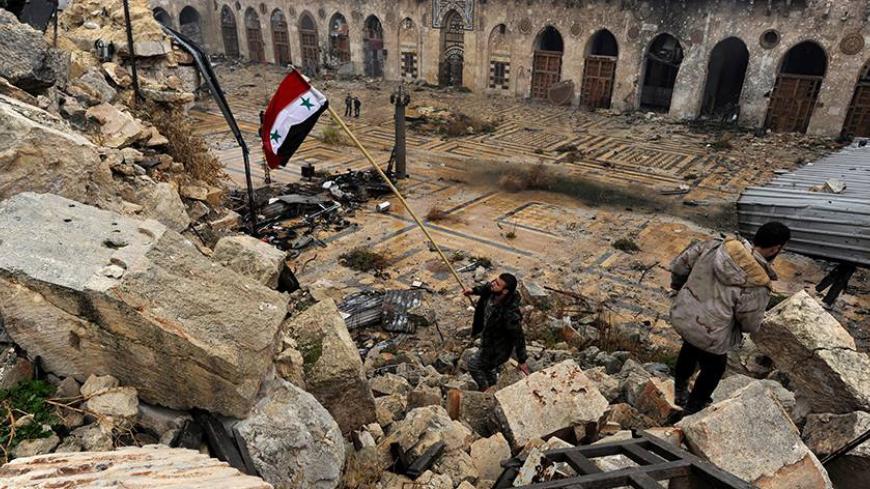 A member of forces loyal to Syria's President Bashar al-Assad attempts to erect the Syrian national flag inside the Umayyad Mosque during a media tour, Aleppo, Syria, Dec. 13, 2016. - REUTERS/Omar Sanadiki

This is the third in a series of stories from Al-Monitor correspondent Fehim Tastekin, who has been traveling in Syria.

ALEPPO, Syria — As I was walking around the fortress of Aleppo last week, some officials were hoisting the Syrian flag. They insisted that I photograph it. One soldier saluted while others raised the flag. Next to a nearby staircase, a giant poster of President Bashar al-Assad was firmly planted. It was like a conquest celebration.

There are some people who compare the battle of Aleppo to that of Stalingrad, which helped change the course of World War II. Of course it is not on the same scale as Stalingrad, but in Syria, the retaking of Aleppo marked the turning point in the war, ending the bloody revolution backed by the Gulf-Western alliance. In a way, the high cost of Aleppo's liberation brings to mind the costly victory of King Pyrrhus of Epirus over Macedonia and Rome.

The human and material costs of the Syrian war, which destroyed the historic parts of Aleppo and its eastern suburbs, are extremely high. Whether the battle will be recorded in history as a Pyrrhic victory will depend on whether the Damascus regime and people of Aleppo will be able to reconstruct their beloved city.

One factory owner said that if security is assured, he will have his plant running again in one month. Almost everyone Al-Monitor spoke to said, “Yes, we have been destroyed, but we will rise and rebuild.” Is that wishful thinking? Not really. Those familiar with Aleppo know its people as industrious, productive and determined. Aleppans have valued the historical artifacts around them as the basis of their wealth and prestige for centuries.

But to reconstruct some of those treasures will be very difficult if not impossible. Reconstruction of residential areas simultaneously with historic treasures requires a phenomenally comprehensive and expensive effort.

Syrian officials are preparing for reconstruction but haven’t yet shared their plans with the public. There will be separate plans for historical areas and residential districts. According to Mamun Abdulkerim, Syria's director of antiquities and museums, officials are in touch with UNESCO and the Aga Khan Foundation for assistance. I was surprised to hear they have already started training programs in Beirut for those who will be working to restore historic monuments.

Abdulkerim was candid in estimating how much of the damaged antiquities they can restore: “I can’t offer a rosy assessment that all is well. No, it is a disaster. More than 1,500 historic structures were damaged.” He said 70% of the historic bazaar is damaged and 30-40% of it is beyond repair. Some can be repaired even if only a small part of them remains standing.

"Aleppo is on the World Heritage list. You cannot act arbitrarily or do what you want. We need billions of dollars for Aleppo because the damage is beyond your imagination," he said.

There is talk of building a new city in East Aleppo for those who lost their dwellings. There are even rumors of China undertaking such a venture.

Asked who will be doing the lion’s share of the reconstruction, an official said, “Naturally, it will be done by our friends who did not abandon us during the war. I don’t think there will be a role for Turkey. People will mutiny against such a decision.”

There are a few advantages for Syria. Contrary to persistent popular analysis from abroad, the country is not divided. Despite sectarian campaigns and clashes by jihadis financed with money they received from the Gulf, Syrians did not split along sectarian lines. There was no sectarian divide between the Syrian army and the people, as some said. When you carefully observe the internal dynamics, you can see it was not a war between Alawites and Sunnis or Christians and Muslims.

Only in Homs, when the clashes began, did systematic attacks by Sunnis against Alawites, Shiites and Christians trigger a sectarian divide, but that was short-lived.

Aleppo is the best example that this was not a sectarian war. At least six Sunni religious notables were killed in Aleppo because they rejected an armed uprising. Sunni religious figures were constantly under threat for not joining the war. The most annoying question you can ask soldiers on the Aleppo front is whether they are Sunni or Alawite. Nothing angers Syrians as much as this question.

As far as I could see, Assad is more popular today than before. Of course, this popularity doesn’t cover his entire regime.

According to bureaucrats, politicians and citizens Al-Monitor spoke with in Aleppo and Damascus, the system is mired in bribery and corruption and cannot survive for long. People will want to see some of the ruling officials punished. The country has paid an extraordinary price for the war and will not tolerate those profiting from cronyism, nepotism, corruption and abuse.

An Aleppo University professor who requested anonymity spoke of the war's influence on politics.

“I oppose the regime, but I have to admit Assad managed the crisis well. At the moment, we have no alternative to him. If there were an election today, he would get more than 70% of the vote. Of course, my criticism of the regime hasn't changed. People put their criticisms on the back burner temporarily because they realized the country was about to disintegrate. It wasn’t the right time to settle scores with the regime. But when the war is finally finished, people will want drastic changes. The government is aware of this mood and is trying to change some things. Be assured, nothing will be the same as before," he said.

An academic who joined our discussion said, “Many heads will roll. [There is] no other way.”

As the regime has been given some period of grace by its opponents, there is no serious debate on Assad’s presidency and his legitimacy. What we have is the foreign-supported opposition holding Assad responsible for the bloodshed, and then those identified as legitimate internal opposition seeing Assad as the guarantor of the country's integrity.

Where do Iran and Hezbollah stand?

Syria will definitely insist that its allies in the war play major roles in its reconstruction. Nobody challenges the role Russia will play. But it is not the same for Iran, the other major ally. It's not hard to detect resentment among the people and even government officials of Iran's interventionist attitude. Many Syrians even prefer an alliance with Russia because they believe Moscow is not interfering in their domestic affairs. Moreover, Al-Monitor was told that Iranians' overbearing, superior attitude especially annoys the Syrian army.

A veteran Syrian journalist told me Iran's assistance won't result in Iranian influence on Syrian politics. "You have to understand the political structure in Syria. Syria’s alliances don't allow [for] influence on the country. Assad is balancing Iran with Russians and vice versa. If Iran presses too hard, he cites Russian reservations. If Russia presses too hard, Assad then refers to Iranian objections."

Curiously, Syrians' unease with Iranians doesn't apply to Iran-supported, Lebanon-based Hezbollah, which hails from the same cultural basin as Syrians. Hezbollah leader Sheikh Hassan Nasrallah is no less prestigious in Syria than Assad. In Damascus, Homs and elsewhere — even in Aleppo, with its prominent Sunni identity — you will see Nasrallah posters all over, and there is widespread affection for him among Christians.

In the government offices I visited, all I saw were joint photos of Nasrallah and Assad. Some shops even have Nasrallah’s portrait painted on the shutters. Street vendors sell lapel pins, cigarette lighters and wallets with photos of Assad and Nasrallah. I didn’t see a single photograph of Iranian leaders. You see Iranians on the front lines but not in city centers. In short, people distinguish between Hezbollah and Iran.