Is Turkey’s shift on Assad beginning of the end of Syria’s war?

Turkish deputy prime minister says "we just have to work with what we have"; no sectarian divide in Aleppo; the Syrian Kurdish fault line. 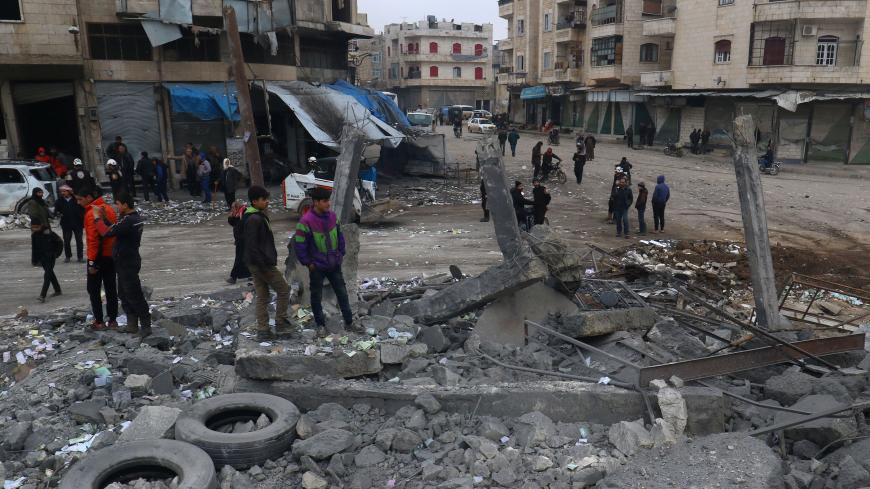 People inspect a site hit by airstrikes at a parking garage in the rebel-held city of Idlib, Syria, Jan. 18, 2017. - REUTERS/Ammar Abdullah

Turkey’s Deputy Prime Minister Mehmet Simsek said Jan. 20 that the “facts on the ground have changed dramatically, and so Turkey can no longer insist on, you know, a settlement without [Syrian President Bashar al-] Assad, and it’s not, you know, realistic. We just have to work with what we have.”

Assad said that his objectives for the Astana talks are “about talks between the government and the terrorist groups in order to have a cease-fire and to allow those terrorist groups to join the reconciliations in Syria, which means giving up your armaments and having amnesty from the government. This is the only thing that we can expect in the meantime.”

The United States will not send a delegation to Astana, and will be represented at the conference by the American ambassador in Kazakhstan, who will attend as an observer.

Turkey’s turnaround on Assad comes as Ankara expects a new beginning in US-Turkey relations with the Trump administration. In an op-ed published earlier this month in The Washington Post, Turkish Foreign Minister Mevlut Cavusoglu claimed that the United States under President Barack Obama had “criticized, neglected and ignored [Turkey] on vital matters.”

Turkey may be cheered by the prospect of improved ties under President Donald Trump. US national security adviser Michael Flynn wrote Nov. 8 that the US should prioritize US relations with Turkey, adding that Fethullah Gulen, the religious leader who resides in Pennsylvania and whom Turkey blames for the failed July 2016 coup, “is running a scam” and “we should not provide him safe haven.”

Semih Idiz writes, however, “The problem appears to be that Turkey’s expectations are predicated solely on Washington meeting its demands, leaving little if any room for negotiation or reasonable compromise. Ankara is saying in effect that if its two clean-cut demands are not met, there is little hope for improved ties.”

Those demands include the United States breaking its ties with the Democratic Union Party (PYD) of the Syrian Kurds and its military wing, the People's Protection Units (YPG), which Ankara claims are linked to the Kurdistan Workers Party (PKK), which Turkey considers a terrorist group, as well as the extradition of Gulen.

Prime Minister Binali Yildirim termed US support for the YPG as “disgraceful,” and Cavusoglu in his op-ed complained of being “lectured about due process, probable cause and evidential standards” by Washington in response to Ankara’s request for Gulen’s extradition.

Differences over Gulen and the Syrian Kurds are unlikely to be resolved easily or soon. The United States must follow due process and evidential standards in considering the extradition of any foreign national, including Gulen, and would be hard pressed to ditch the PYD and the YPG, which are the core of the US-led coalition against the Islamic State in Syria, especially as the coalition prepares for an assault on IS-held Raqqa.

Amberin Zaman points out that “as Gulen’s presence in the United States remains a thorn in Turkish-US ties, so too is the incarceration of American pastor Andrew Brunson, whose case has gone largely unnoticed in Turkey but not in the United States.” Brunson has been charged for membership in a terrorist organization and is being held in a prison in Izmir.

Zaman adds, "To be sure, the AKP has been credited with doing more for non-Muslim communities than any of its predecessors. But the mood has turned ugly since the July 15 coup. Tens of thousands of people have been arrested on often thinly supported accusations of ties to Gulen and countless likely innocents like Brunson have been caught in the net.”

"No sectarian divide in Syria"

Fehim Tastekin, reporting from Aleppo, writes, “Contrary to persistent popular analysis from abroad, the country is not divided. Despite sectarian campaigns and clashes by jihadis financed with money they received from the Gulf, Syrians did not split along sectarian lines. There was no sectarian divide between the Syrian army and the people, as some said. When you carefully observe the internal dynamics, you can see it was not a war between Alawites and Sunnis or Christians and Muslims. Only in Homs, when the clashes began, did systematic attacks by Sunnis against Alawites, Shiites and Christians trigger a sectarian divide, but that was short-lived.”

Tastekin adds, “Aleppo is the best example that this was not a sectarian war. At least six Sunni religious notables were killed in Aleppo because they rejected an armed uprising. Sunni religious figures were constantly under threat for not joining the war. The most annoying question you can ask soldiers on the Aleppo front is whether they are Sunni or Alawite. Nothing angers Syrians as much as this question.”

In addition to the daunting reconstruction and humanitarian crises, Syria also suffers from the scourge of corruption. “As far as I could see,” Tastekin writes, “Assad is more popular today than before. Of course, this popularity doesn’t cover his entire regime. According to bureaucrats, politicians and citizens Al-Monitor spoke with in Aleppo and Damascus, the system is mired in bribery and corruption and cannot survive for long. People will want to see some of the ruling officials punished. The country has paid an extraordinary price for the war and will not tolerate those profiting from cronyism, nepotism, corruption and abuse.”

Tastekin discovers the complexity of Iran’s role in Syria, compared to both Russia and Hezbollah. “Nobody challenges the role Russia will play. But it is not the same for Iran, the other major ally,” Tastekin reports. “It's not hard to detect resentment among the people and even government officials of Iran's interventionist attitude. Many Syrians even prefer an alliance with Russia because they believe Moscow is not interfering in their domestic affairs. Moreover, Al-Monitor was told that Iranians' overbearing, superior attitude especially annoys the Syrian army.”

“Curiously, Syrians' unease with Iranians doesn't apply to Iran-supported, Lebanon-based Hezbollah, which hails from the same cultural basin as Syrians,” Tastekin reports. “Hezbollah leader Sheikh Hassan Nasrallah is no less prestigious in Syria than Assad. In Damascus, Homs and elsewhere — even in Aleppo, with its prominent Sunni identity — you will see Nasrallah posters all over, and there is widespread affection for him among Christians.”

The governments of Syria and Turkey may share an interest in limiting Kurdish autonomy in northern Syria. Tastekin reports this week that “in military and civilian political circles in Damascus, the Kurdish slogan of ‘democratic autonomy’ is a prelude to a division. Syrians think the United States is playing games in that region, so eyebrows rise when you say you are going to Qamishli.”

Tastekin describes arriving at the Qamishli airport: “The Qamishli airport is a border gate to Turkey. The Syrian army controls nearby public buildings, a living quarters compound and the main road linking the compound to the airport. The Kurdish police force and YPG stay away. Even within Qamishli itself, those who want to travel from one end of town to the other use a complicated bypass road to avoid army checks. Syrian soldiers don’t enter the Kurdish-controlled area in uniform and with their weapons. The army-controlled highway from the airport is richly adorned with joint posters of Assad and Hezbollah leader Sheikh Hassan Nasrallah. The walls are covered with portraits and slogans of father and son Hafez and Bashar al-Assad. The widespread slogan posted at the main road junction near the public offices: ‘Defend Syria.’ … Beyond the army-controlled highway, things are different. The portraits of the Assads are replaced by the portrait of imprisoned Kurdistan Workers Party leader Abdullah Ocalan.”