In Syria, traveling from Damascus to Qamishli can prove complicated, as suspicions about Kurdish aspirations of autonomy persist. 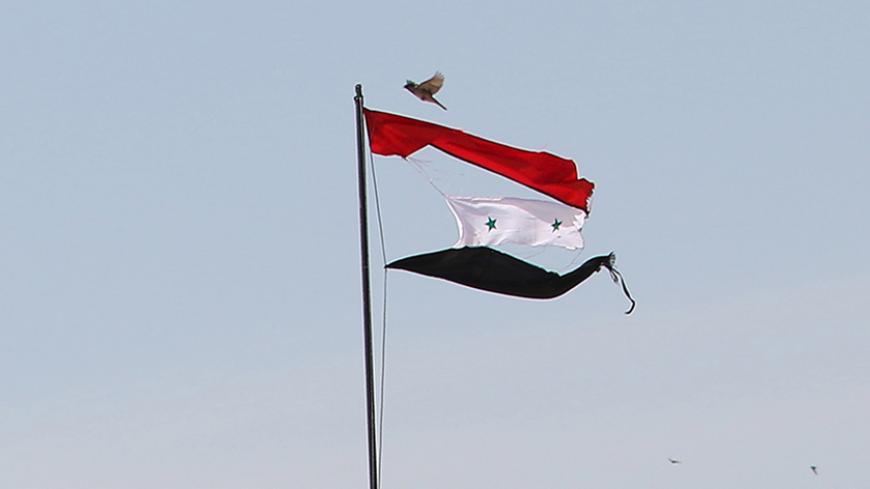 A bird flies near a torn Syrian national flag in the city of Qamishli, Syria, April 21, 2016. - REUTERS/Rodi Said

DAMASCUS, Syria — At the Syrian Ministry of Information, where I and a fellow reporter recently were seeking authorization to travel to Qamishli, we were told we would also need the permission from the Political Directorate. The directorate is the press and information unit of the General Staff that controls the movements of foreign media inside Syria. A brigadier general behind the desk asked, ‘‘Why do you want to go to Qamishli?”

In Damascus, when you mention the area in northern Syria that until recently the Kurds called Rojava, suspicious looks are instantaneous. Although the Kurds accepted (not entirely willingly) the name change from Rojava to Democratic Federal System of Northern Syria, Arabs, Syriacs and Turkmens are still suspicious about Kurdish aspirations of autonomy.

In military and civilian political circles in Damascus, the Kurdish slogan of "democratic autonomy" is a prelude to a division. Syrians think the United States is playing games in that region, so eyebrows rise when you say you are going to Qamishli.

The general asked again, “Why do you want to go to Qamishli? What is there? What do you hope to see there?” Then the conversation went like this:

"Well, we have been to places like Aleppo and Homs. Why not to Qamishli? Isn’t that also a Syrian city?"

"Sure it is, but it has problems, like security."

"Aleppo was more dangerous. We have contacts among the Kurds. They guarantee our security."

Our permission had actually already been issued. The paper was on the general’s desk; all we needed was his signature. But they just don’t like to think about Rojava in Damascus. Even the travel agency wanted to see authorization from the immigration office before selling us a ticket to Qamishli, although the form we had from the Information Ministry was permission enough.

The brigadier in charge of foreign media said Turkey had destroyed Syria by supporting armed rebels and held Turkey responsible for the destruction and plundering of Aleppo. Anyone who meets a Turkish journalist in Syria immediately recalls the honeymoon in bilateral relations before 2011 and how Turkey shifted to supporting the armed opposition.

Another brigadier who was chatting with two Russian military officials in the same room joined the conversation.

“Good relations between Turkey and Syria were for the benefit of both. People were making day trips across the border. Trade was booming. [Turkish President Recep Tayyip] Erdogan, by opening Turkey’s borders to armed groups and giving them weapons and ammunition, caused enormous damages to both countries," he said.

"Look, I also get upset when I hear about suicide bombings in Turkey," he continued. "Nobody in Turkey knows how many safe houses are operated by groups such as [the Islamic State (IS)]. The security and stability of Syria means security and stability for Turkey. These two countries influence each other in many fields. If the Syrian economy is bad, the Turkish economy suffers. Don’t misunderstand me — we have absolutely no problems with Turkish people. We know most of them support us. So what did Turkey gain from all this? Erdogan might have received funds from Qatar and Saudi Arabia, but what did it [provide for] Turkey? Nothing.”

As the conversation moved on, I thought it was the right time to ask whether the Damascus regime will accept democratic autonomy in Rojava and whether the Syrians approve of Erdogan’s policy of curbing the Kurds’ gains in Syria. The brigadier who was talking to the Russians answered, “Our priority is to totally eradicate [Jabhat Fatah al-Sham, IS] and their allies from the Syrian scene. The Kurds are our citizens. We want to solve problems with them at the table. We have a single flag, the Syrian one. They had the Syrian flag before, and that is what they will have again.”

Syrian military and civilian officials have the same reaction to the idea of a federation or autonomy in northern Syria: Neither is acceptable, but by improving the local administrations’ laws, some of the prerogatives of the center can be transferred to the provinces.

Sharef Abaza, a rare parliamentarian who was not reluctant to criticize the reign of former President Hafez al-Assad, spoke later with Al-Monitor about the autonomy issue.

“In 1998, I addressed the parliament. I referred to the grievances of Kurds and said they must be allowed to preserve their language and culture. I said we could grant them autonomy in this direction,” he said. “Despite my insistence, my statement was not recorded in the parliamentary minutes. The regime cannot agree to autonomy or a federation. There is a law of local administrations. Some of the articles of the national constitution were suspended because of the 1973 war with Israel. The local administrations law was sidelined. We can amend some of its clauses and transfer central powers to the local authorities. Kurds have been oppressed. We have to find a way to improve their status. Nothing can remain as before.”

While there are some who openly praise the model introduced by the Kurds, there are also those who strongly oppose the partnership the Kurdish People's Protection Units (YPG) has developed with the United States.

A retired Syrian general who requested anonymity told Al-Monitor, “The Kurds made a mistake. They should not have entered into such a relationship with the United States. In 2004, after the tension at Qamishli, we submitted a report to [President] Bashar al-Assad on the Kurds. We said we had to restore the rights of these people. After reading this report, Assad went to Qamishli and met with the Kurds. Some improvements were made in the status of Kurds who did not have citizenship. Yes, Kurds must be given their rights, but they should not abuse the opening up of the regime. They went too far by linking up with the Americans. The Syrian state cannot ever agree to an option of federation or autonomy, which will end up dividing the country.”

On the way to Qamishli

In Damascus, just as I was giving up on my quest for permission to visit Qamishli, the approval came through. It was Friday. The highway to the Damascus airport and its numerous checkpoints was practically empty. There were few passengers in the terminal because it was the weekend. I was told domestic flights are usually full on other days.

When a foreigner travels from Damascus to other cities in Syria, it is like he is traveling abroad. Syrians love to record everything in massive black tomes. Our permission paper from the Ministry of Information was thoroughly checked at four different control points and recorded at length at every one. The officer at the desk could not grant permission to proceed. He passed the paperwork on to his superior. Although it is a domestic flight, passports and IDs were checked. I was told that this was to apprehend criminals or those avoiding military service.

But another official provided a different explanation: “Many of our colleagues died from the rockets terrorists fired at the airport. Some of them were recruited by the army. We had staffing problems and decided to combine the domestic-foreign travel controls.”

The Qamishli airport is a border gate to Turkey. The Syrian army controls nearby public buildings, a living quarters compound and the main road linking the compound to the airport. The Kurdish police force and YPG stay away. Even within Qamishli itself, those who want to travel from one end of town to the other use a complicated bypass road to avoid army checks. Syrian soldiers don’t enter the Kurdish-controlled area in uniform and with their weapons.

The army-controlled highway from the airport is richly adorned with joint posters of Assad and Hezbollah leader Sheikh Hassan Nasrallah. The walls are covered with portraits and slogans of father and son Hafez and Bashar al-Assad. The widespread slogan posted at the main road junction near the public offices: “Defend Syria.”

I asked two Syrian journalists how the Kurds interpret that slogan. They said its message is simple: Don’t damage Syria. Defend it.

Beyond the army-controlled highway, things are different. The portraits of the Assads are replaced by the portrait of imprisoned Kurdistan Workers Party leader Abdullah Ocalan. Ocalan is considered the founder of the “democratic autonomy” idea.

Syrian Kurds, who are trying to design their own destiny, are now at a critical crossroads. On one side is Turkey, which is increasing its pressure on them and at times resorting to firepower. Farther east they have the government of President Massoud Barzani in Iraqi Kurdistan, which cooperates with Ankara and maintains an embargo on them. Finally there is the Syrian regime, which is distinctly unhappy with the Kurds’ plans for a federation and US partnership.

One should not underestimate the cards the Syrian regime can play against the Kurds. I am talking of provoking Kurds against Kurds and factors that could spoil the harmony among the Kurds, Arabs, Turkmens, Syriacs, Armenians, Chaldeans, Circassians and Chechens, who are all part of the Rojava project.