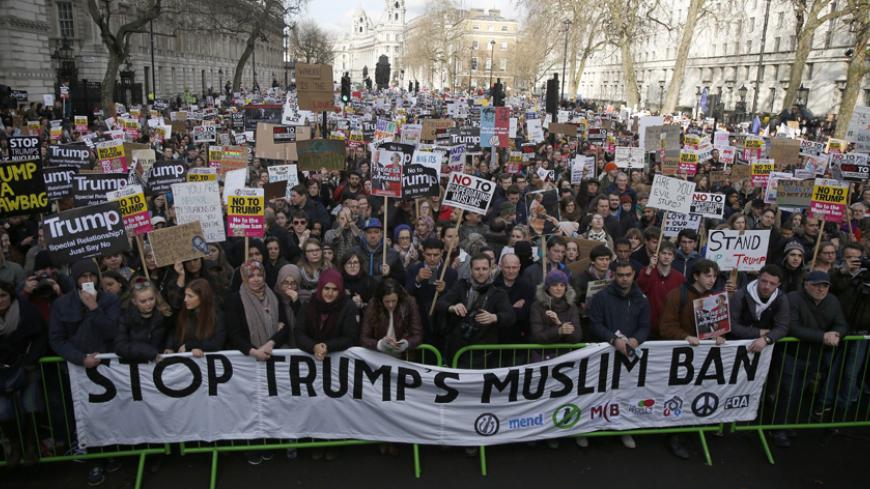 Demonstrators hold placards outside Downing Street during a march against US President Donald Trump and his temporary ban on refugees and nationals from seven Muslim-majority countries from entering the United States, in London, Feb. 4, 2017. - REUTERS/Neil Hall

Mustafa Akyol writes that despite protests throughout the United States and worldwide over the Trump administration’s executive order restricting access to the United States from seven predominantly Muslim countries, “the same solidarity did not come from some of the Middle Eastern governments that often claim to be the defenders of the faith,” including Saudi Arabia, Egypt, the United Arab Emirates and Turkey, which, Akyol added, “not only has political expectations from Trump but also has a political elite that has a curious adoration for the new American president.”

Akyol speculates that one reason Turkish President Recep Tayyip Erdogan may be somewhat restrained in response to Trump’s Muslim ban is pragmatism. “Erdogan and his team have some important expectations from Trump. One is that he may help extradite Fethullah Gulen, who Turkey sees as the mastermind of the failed coup attempt on July 15, 2016. The other one is that Trump may stop the Obama administration’s policy of supporting the Syrian Kurdish forces, who Turkey considers to be terrorists.”

Erdogan’s expectations may be misguided, according to Semih Idiz. “Developments in Syria,” he writes, “may once again be slipping through Turkey’s fingers. The new Donald Trump administration in Washington has already disappointed Ankara. Rather than being welcomed, Trump’s advocacy of safe zones in Syria — an idea first proposed by Turkey — has ruffled official Turkish feathers. Ankara now fears that such zones will be a step toward granting Syrian Kurds autonomy.”

Meanwhile, on Jan. 27, the “S&P lowered Turkey’s outlook to ‘negative’ from ‘stable,’ while Fitch cut its credit rating to BB+ from BBB-, stripping the country of its last remaining investment grade status with the Big Three,” reports Mustafa Sonmez. “The need to decrease political risks is now more urgent than any economic measure. A ‘no’ to the one-man regime at the looming referendum may prove the most decisive step on the way to recovery and back to the upper league.”

Erdogan may be heartened by reports that the Trump team has called for a rewrite of the Obama administration’s plan to rely on the Syrian Democratic Forces (SDF), which is made up predominantly of Syrian Kurdish People’s Protection Units (YPG), the armed branch of the Democratic Union Party (PYD), which is allied with the Kurdistan Workers Party (PKK). Turkey considers the PKK, PYD and YPG to be terrorist organizations.

But these, too, may be false hopes. According to The Washington Post, the Obama administration came to rely on the SDF because of Turkey’s failure to provide alternative forces. “For two years inside the Pentagon,” the Post reported, “Turkey’s promises of sending rebels and later its own troops were viewed with deep skepticism and derisively dubbed ‘Erdogan’s ghosts’ or the ‘unicorn’ army, according to current and former defense officials.”

The Washington Post added, “Trump and his top advisers also could decide to increase coordination with Russia and even Syrian President Bashar al-Assad to seize Raqqa. Or he could ultimately conclude, as Obama did, that arming the Kurds represents the best of several bad options.”

Despite an op-ed on Election Day by Lt. Gen. Michael Flynn, who has since been appointed as Trumps’ national security adviser, that called attention to the need to address the crisis in US-Turkey relations, Flynn and Director of the Central Intelligence Agency Michael Pompeo are otherwise known as critics of the Erdogan government.

Turkey’s troubles, however, have more to do with its disastrous Syria policies rather than the personalities in the Trump administration. Idiz writes, “Some Syrian opposition members have also expressed disappointment in Turkey’s performance in Astana. One opposition member told Reuters that Turkey had been weak in Astana and unable to assert the opposition’s line. Given this unfolding backdrop, Ankara now fears that Trump’s safe zones and Russia’s draft constitution are designed, among other things, to provide the Kurds an autonomous region. This is leading to angry comments in the pro-government media in Turkey. It is noteworthy, however, that the target of this anger is the United States more so than Russia.”

Fehim Tastekin, reporting from Qamishli, Syria, observed firsthand that the prospects for Kurdish autonomy may eventually be reined in by Damascus. “In a swath of land along the north, a pre-planned structure for autonomy is slowly taking shape from Qamishli to Hasakah, from Tell Abyad to Kobani and Manbij,” Tastekin writes. “Although they are not physically linked to the main body, Afrin and Aleppo’s Sheikh Maqsoud district are considered parts of it. Syrian officials I spoke with talk of first eroding organizations like IS [Islamic State] and Jabhat Fatah al-Sham and then regaining control of the area without fighting the Kurds — but also not allowing them to mutate into federalism. Kurds ultimately want to steer Syria to a federal structure and to have Rojava [the informal name for the Democratic Federal System of Northern Syria] autonomy recognized in the constitution. War is the last thing the Kurds want. They are also aware that under current conditions, they cannot think of dividing the country or setting up an independent state. Both sides are approaching a critical threshold that evokes incendiary questions.”

Tastekin writes, “Kurds have already taken major steps toward a state structure with a constitution, a constituent assembly, popular committees, defense and security forces, and education and cultural institutions.” According to local sources, the Syrian government is content to allow some degree of local autonomy, such as the use of the Kurdish language in education, and allowing Asayish forces to handle local policing. But probably not much more than that.

This column reported last week on the Russian draft constitution, which suggested autonomy for Syria’s Kurdish regions, as well as the denial of top Russian officials that Moscow is endorsing autonomy.

Tastekin also interviewed a senior Asayish official who spoke of “Turkey’s intensifying threat against Rojava, saying that Ankara, together with Iraqi Kurdistan President Massoud Barzani, is trying to eradicate the autonomy movement in Rojava.”

Despite the crisis in US-Turkey relations over Syria, Akyol observed a possible ideological affinity between Trump and Erdogan. He writes, “Trump’s populism resonates with the populism of Erdogan, creating an affinity of worldviews. When Trump condemns the ‘mainstream media,’ or his strategist Stephen Bannon says the media should ‘keep its mouth shut,’ Erdoganists see a very familiar style of strongman politics that they admire. When Trump condemns the conspiracies of ‘internal bankers,’ he says something that confirms the conspiracy theories of Turkey’s new ruling class. Basically, both Erdogan and Trump represent a nationalist, nativist, populist battle cry against the global liberal order, and this creates common ground between the two sides. The fact that Trump dislikes Islam while Erdogan champions it, apparently, is not important enough to disrupt this new transatlantic connection.” At least not yet.