Turkey squeezed between Russia, US in Syria 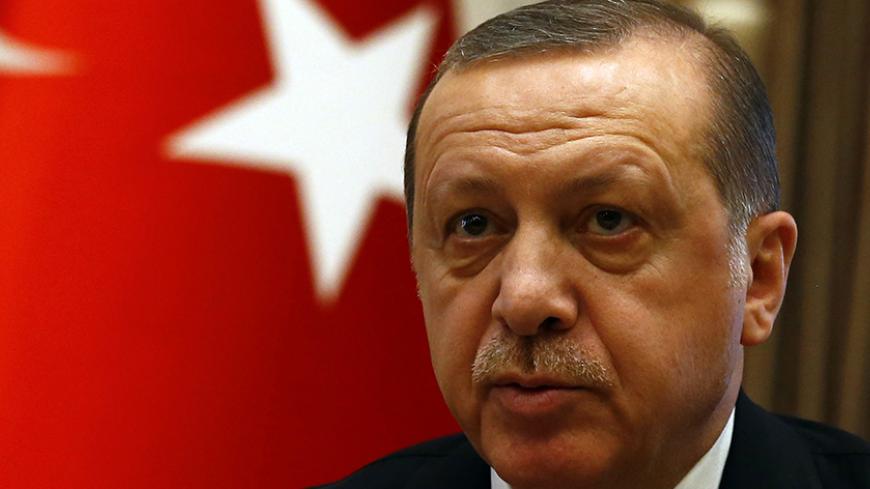 Turkish President Recep Tayyip Erdogan speaks to media after his meeting with Britain's Prime Minister Theresa May at the Presidential Palace in Ankara, Jan. 28, 2017. - REUTERS/Umit Bektas

Developments in Syria may once again be slipping through Turkey’s fingers. The new Donald Trump administration in Washington has already disappointed Ankara. Rather than being welcomed, Trump’s advocacy of safe zones in Syria — an idea first proposed by Turkey — has ruffled official Turkish feathers. Ankara now fears that such zones will be a step toward granting Syrian Kurds autonomy. Turkish officials have been noticeably mute on the matter, saying they need to see a full proposal before commenting.

Veteran political analyst Murat Yetkin underscored the anomaly of Trump's calling King Salman for endorsement of his safe zones idea, rather than Erdogan, who has been pushing for a Syrian safe zone for years. “Fighting terrorism is one of Trump’s major priorities,” Yetkin wrote in his Hurriyet Daily News column. “That is why it is particularly confusing when you read that he agrees on the need to create safe zones in Syria … without consulting the Turkish leadership.”

Trump’s plans for Syria are not the only source of Turkey’s concerns. Russia’s political plans for the future of Syria are also distressing, despite much-touted improved ties between Ankara and Moscow. Turkish officials are smarting over the draft constitution for Syria that Moscow produced at the recent Astana meetings, sponsored by Turkey, Russia and Iran in an effort to open a new peace track on Syria.

Russia’s offer of autonomy to the Kurds in a unified Syria raised the specter in Ankara of a self-administering Kurdish region along Turkey’s border held by groups linked to the outlawed Kurdistan Workers Party (PKK). Moscow's hosting Kurds from the Democratic Union Party (PYD) in late January did not go down well in Ankara either. Turkey did not, however, lodge a formal protest due to its current reliance on relations with Russia to counterbalance its deteriorating ties with the West.

Turkey claims that the PYD and its military wing, the People's Protection Units (YPG), are a terrorist organization linked to the outlawed PKK, but it has thus far failed to convince any other country of this. Washington supports the YPG in its fight against the Islamic State (IS), and the Trump administration has given no indication that this policy will change.

Ankara also worries about the possibility of a Moscow-Washington joint effort in Syria that conflicts with its interests. Mehmet Ocaktan, a former deputy from the ruling Justice and Development Party (AKP), who currently writes for the daily Karar, believes Putin revealed his true intentions in Syria “by promising the PYD autonomy.” Maintaining that Trump has “great admiration for the armed Kurdish groups in Syria,” Ocaktan contended, “Considering Trump’s admiration for Putin, it won’t be a surprise to see them form an alliance in Syria.”

Washington has also suggested that the Kurds should participate in talks aimed at ending the Syrian crisis. This puts Turkey at odds with two global powers that are promoting more or less the same line on an issue Ankara has turned into an existential matter.

Russia’s support for a secular constitution for Syria, which the Assad regime reportedly wants, is also a potential source of discomfort for Erdogan and the AKP, given their Islamist orientation. Syrian UN Ambassador Bashar Jaafari claimed after the Astana talks that Turkey had blocked a reference to secularism in Syria from the final communique. Ankara has made no official comment on the claim.

At the start of the Syrian crisis, Turkey expected Assad to fall quickly and to be replaced by an elected government that, given Syria’s demography, would have elevated a Sunni majority to power more than likely led by Muslim Brotherhood-related groups. Ankara clearly hoped to regain some initiative by moving away from that position and aligning itself with Moscow to try to steer developments according to its interests. Events, however, appear to be moving in the opposite direction.

Turkish officials are aware that the United States is also likely to support a secular Syrian constitution that provides a degree of autonomy to the Kurds. Turkey’s problem, however, is that it represents the weak link in this equation and has only limited capacity to promote its position on the Kurds or to put its stamp on Syria's political future.

Russia expert Kerim Has from the International Strategic Research Organization / Centre for Eurasian Studies in Ankara underlined this point. “Turkey’s hand is not strong in its relations with Russia. It has to go along with Moscow’s line on Syria out of necessity,” Has told Al-Monitor. “It is not possible for Russia to please Turkey under these circumstances, but Ankara can’t raise its voice too much against Russia or the United States.”

Given this unfolding backdrop, Ankara now fears that Trump’s safe zones and Russia’s draft constitution are designed, among other things, to provide the Kurds an autonomous region. This is leading to angry comments in the pro-government media in Turkey. It is noteworthy, however, that the target of this anger is the United States more so than Russia.

Yeni Safak Editor-in-Chief Ibrahim Karagul put it starkly. “The fact that Trump issued this order [sic] as soon as he came to power could have something to do with a plan to establish a ‘Corridor of Terror,’” Karagul argued, underlining Washington’s support for the PYD and YPG.

It is also clear to Ankara that any safe zone where the PYD is lodged will be under US protection and prevent Turkey from mounting operations against the YPG. It was nevertheless noteworthy that Erdogan has said that the Turkish military will not go beyond the Syrian town of al-Bab, near the Turkish border, after it is liberated from IS. Fearing clashes between Turkey and the YPG, Washington has insisted that the Turkish military not venture farther than 20 kilometers (12 miles) south of its border with Syria. “Henceforth we must make speedy headway and finish the job there without going farther south,” Erdogan told reporters en route from a visit to Tanzania on Jan. 27.

Turkey and its Free Syrian Army allies have been trying to liberate al-Bab for weeks, amid mounting casualties, with occasional air support from Russia and the United States. Despite the headway reported by the military, the town has not yet been captured.

Previously, Erdogan had defiantly challenged the United States by saying the Turkish military would move on to Manbij, after capturing al-Bab, to expel the YPG from there. Erdogan’s latest remark provides another instance of Ankara backpedaling in Syria after raising the ante to a point beyond Turkey’s capacities. Taking on two superpowers at the same time is proving to be difficult.