Is Syria Moving Toward Partition?

There have been indications in recent weeks that Syria is moving toward partition, writes Jean Aziz. 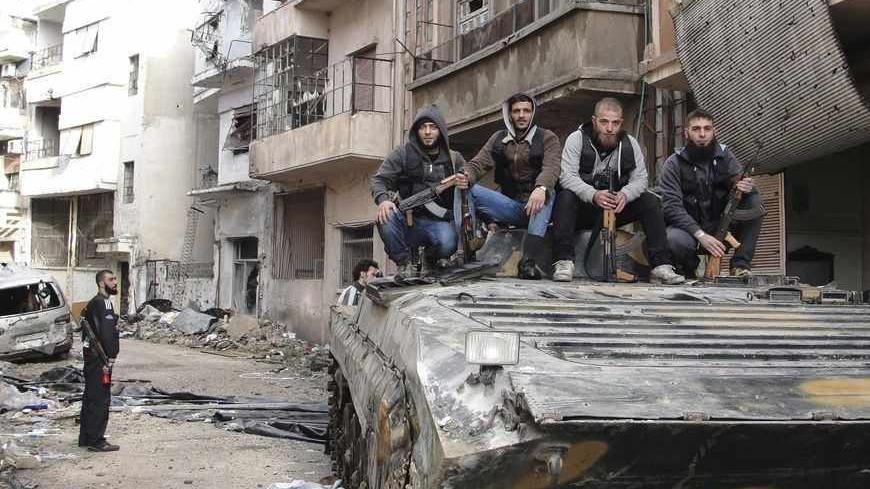 Free Syrian Army fighters sit on a tank they claim to have seized from Syrian regime forces in Homs on April 5, 2013, in this picture provided by Shaam News Network. - SHAAM NEWS/REUTERS/Mohamed Ibrahim

There are signs and warnings from Syrian President Bashar al-Assad as well as the Syrian opposition that Syria may be moving toward partition.

Talk of partition had begun a few months after the outbreak of the war in Syria, as many analysts tried to rewrite Levantine history. They argued that the independent states in the region had been created a hundred years ago by the West during and after World War I, and that a century later, the West is trying to take the region in the opposite direction. Along these lines, they said that between 1915 and 1916, the West had wanted to break up the anti-Western Ottoman Empire and create modern states within its boundaries. After 2013, however, the trend will be to deliver those “failed states” to neo-Ottoman dominance, since Turkey is now allied with the West and will protect its interests.

Despite all the talk, however, no practical steps had been taken toward partition. In the past two weeks, however, that may have changed. Observers have noticed signs that Syria, and perhaps the region later on, has embarked on that journey.

The first indicator is the control of parts of Syria by the armed Syrian opposition and the establishment of an “interim government” to “administer those areas.” Syria’s representation in international forums has become uncertain. Syria’s seat in the Arab League was given to the opposition. Some are looking into the opposition issuing its own passports. Of course, no loyalist or oppositionist official has deemed those moves partitionist. On the contrary, most opposition leaders say that what they are doing is for the sake of a unified Syria.

One should note that such justification has historically accompanied all moves toward partition in countries experiencing internal crises or wars. The pro-unification discourse was used in Yemen when it was partitioned and in Sudan until the country split in two. It also dominated the discourse of every Lebanese warlord for 15 years as each controlled some part of the country. The pro-unification discourse can be traced throughout history, from Korea to Vietnam, China, Taiwan and Germany. Every de facto partition was sought implicitly and rejected publicly.

The second indicator is from the Syrian government. On April 2, the Syrian parliament, the People’s Assembly, announced from Damascus that it was recommending that Syria’s administrative divisions be revised. Of particular note, it recommended the creation of three new provinces. The first consists of Aleppo’s countryside, separated from Aleppo and named Manbej province. The second would be Qamishli province, which is now part of Hasakah province. The third would be Badiya province, created from Palmyra and the surrounding areas of Homs. Of course, the rationale for the new provinces was given various pretexts, but it is difficult to ignore the connection between the new provinces and the military situation in those three areas.

In Aleppo, the new administrative divisions, proposed under the pretext of “administrative development,” divide the province into two areas — one controlled by the opposition and the other by the regime. The same applies in Homs. It is interesting that battles erupted in Qamishli a few days after the parliamentary recommendations.

As soon as the proposals were issued, the regime seemed keen to deny them a partitionist character. From a practical perspective, however, the new divisions delineate the areas controlled by the regime and mesh with the first indicator, an “interim government” to administer the remaining areas.

Experts say the redistricting has clear sectarian dimensions. The Aleppo countryside, Manbej province, is adjacent to Turkey and is mostly Sunni. This effectively reduces the Sunni presence in Aleppo. The province of Qamishli, detached from Hasaka, has a Kurdish majority while most Hasaka residents are Sunni Arabs. The new Badiya province, consisting of the city of Palmyra and the eastern desert, is also Sunni. This reduces the number of Sunnis in Homs, where the western countryside is mostly Christian and Alawite.

The third indicator is what President Assad said April 5 to the Turkish TV station Ulusal a few hours after the administrative redistricting. Assad acknowledged that partition is a possibility, although he said it as a warning and as something he rejects. This is similar to official statements throughout history in similar situations. “Everyone knows that if things reach the point of partition, or if the terrorists gain control in Syria, or both, the situation will directly spread to neighboring countries and the domino effect may eventually reach distant countries.... This means that there will be a state of instability for years, perhaps decades,” said the president.

Assad’s opponents failed to exploit his statement because they suffered a major setback when al-Qaeda in Iraq (AQI) announced on April 9 that Jabhat al-Nusra, which has become the most forbidable group fighting the Syrian regime, “is part of AQI, which seeks to establish an Islamic state in Syria.” AQI leader Abu Bakr al-Baghdadi said, “It is time to announce in front of the people of Syria and the entire world that Jabhat al-Nusra is an extension and a part of the Islamic State of Iraq.” He also announced “the combining of the Islamic State of Iraq and Jabhat al-Nusra into a single entity: The Islamic State in Iraq and Syria.” It was as if he were drawing the geographic and sectarian borders of Syria.

A few hours after al-Qaeda’s announcement, the spiritual and political leaders of the Alawite minority in the city of Tripoli, in northern Lebanon, declared that their sect is being subjected to a war of extermination. On April 10, Sunni jihadists burned large number of Lebanese Alawite shops and businesses in Tripoli. Alawites in the city number some 30,000, or 12% of the population. Most of them live in an area that has become a kind of ghetto. Their businesses throughout the city are now under threat. An Alawite political leader said in an interview, “We are now living in the city between the jaws of pliers. Some deem us traitors and infidels who should be killed and whose property should be destroyed just because we are Alawites.”

So in Syria and its environs, all the stars are aligning for partition. Sectarian separation, population transfers, administrative redistricting, military demarcation lines and, most important, psychological and collective demarcations. That is all it takes to establish a fait accompli, which may change later according to the conditions and the balance of power. All this is happening in an area with a unique sociopolitical composition and where countries have formed after, not before, the formation of the sociopolitical groups living there. These groups have for centuries argued that their “entity” is historically fixed and geographically variable.

Jean Aziz is a contributing writer for Al-Monitor’s Lebanon Pulse. He is also a columnist at Al-Akhbar (Lebanon) and the host of a weekly political talk show on OTV.