A report from Amuda, in northeast Syria, where students have been forced to abandon their studies due to the war. 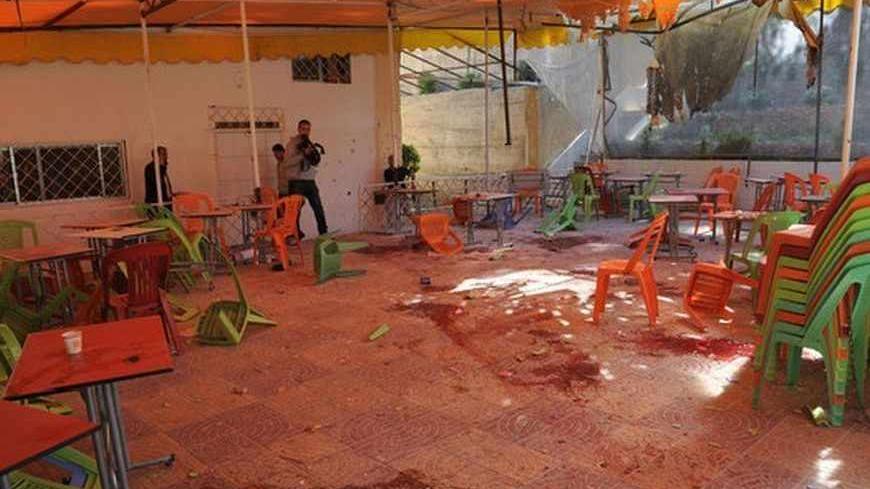 A view shows debris and blood after mortar bombs landed on the canteen of Damascus University's College of Architecture, March 28, 2013, in this handout photograph distributed by Syria's national news agency SANA. - REUTERS/SANA

AMUDA Syria — “The governorate of Hasakeh is a swamp, I need to get out of here,” said red-bearded Abu Wa’el, the commander of the Free Syrian Army (FSA) Dir’ al-Muslimin (Armor of Muslims) brigade in Ras al-Ain. FSA fighters crave fighting with the regime, but they remain stuck in the barracks most of the time because the front line is elsewhere. The mujahedeen are not the only ones burdened by inertia in one of the regions largely spared from government shelling, as thousands of university students waste at least one year without attending classes.

Even if their situation were not comparable to their compatriots under the bombs in Aleppo or Homs, where thousands of schools have been destroyed or converted into shelters for refugees, the students in Hasakeh are often left with the only option of migration.

According to a report published by the Syrian Center for Policy Research in January 2013, the annual budget spent on education shrank from 34.5 billion Syrian pounds ($330 million) in 2010 to 19.5 ($185 million) in 2012. In addition to the budget cuts, there are countless other valid reasons for students to leave their studies, including psychological trauma.

“This is not a suitable environment to study. One of my cousins was fatally wounded while serving in the army in Idlib, and another one lost his kidneys at the hands of a sniper in Bukamal [Deir Ezzor],” said Majid Shaykh Abdullah, 20, who enrolled to study law at the private Open University of Hasakeh in 2012.

In this region, students also have to endure a lack of services, such as the scarcity of water, gas and electricity. It might sound paradoxical, but cities controlled by the regime like Homs, even if fiercely fought over with the rebels, enjoy better services than the remote and relatively stable northeast.

“My brother is still attending university classes in an Alawi neighborhood in Homs, where power supplies are almost continuous,” 29-year-old physics master's graduate Alaa Hussein told Al-Monitor. “In Latakia, everything is absolutely safe and under control,” explained a 27-year-old geology student, “but the airline seats left available from the military are sold through an auction.” It seems that the government decided to exploit the hardships of those forced to fly to avoid unsafe street routes to Latakia.

The risk of being caught in the conflict is another obstacle for those enrolled in universities in other provinces. “I would like to start my chemistry studies in Latakia, but my family doesn’t allow me to settle there, due to the risk of Sunni-Alawi strife,” a 21-year-old chemistry student told Al-Monitor.

Others have had to drop their studies due to the rising living costs. “My father is a driver and he stopped working because the fuel became too expensive,” said law student Majid. “I decided to migrate to Iraqi Kurdistan, but I didn’t find a job and, upon my return, Hasakeh was too expensive to resume my studies there. A return bus trip from Amuda has tripled its cost during the revolution and room rent jumped from 3,000 to 10,000 SYP. Under the current circumstances, my family does not encourage me to continue studying. They need me to work.”

As a result of their participation in the uprising, numerous students are also wanted by security forces, so that they cannot take the risk of crossing checkpoints to reach universities.

“On Oct. 4, 2012, I went to Hasakeh to obtain the document required to prove there was no sentence pending on me, as this is necessary to cross checkpoints and be entitled to student dorms,” recalled a 19-year-old oil engineering student. “The security officials there told me I had two charges on me, one from the national intelligence and the other from the political intelligence for having joined anti-regime demonstrations.”

After that, Shivan was advised by a lawyer not to take the risk of traveling to Homs to follow his courses, even if his faculty is available only in Homs and Deir Ezzor. “To postpone the army call, I enrolled for my second baccalaureate in a different field of study, but this is the last time I can do this. Then I’ll be wanted again at the barracks,” Shivan told Al-Monitor.

One of the few options left to youth has been to look for a job abroad.

“Our eldest son was studying economics in Deir Ezzor and the youngest one engineering in Aleppo,” recalled an elementary school teacher. Her eldest son could only take a few exams in Hasakeh before the city became too expensive, and he was even the victim of a robbery. He eventually decided to leave for Turkey. “He endures heavy work in a textile factory in Izmir and has to cover the expenses of his younger brother, who followed him without finding a job,” she told Al-Monitor.

Others prefer to return home rather than suffering exploitation abroad.

“Syrians are working underpaid in all sort of fields and I’m not willing to accept the same destiny,” Majid said. He is planning to work over the summer to save some money and enroll once again in the university, because he would prefer to remain in his country despite the adversity.