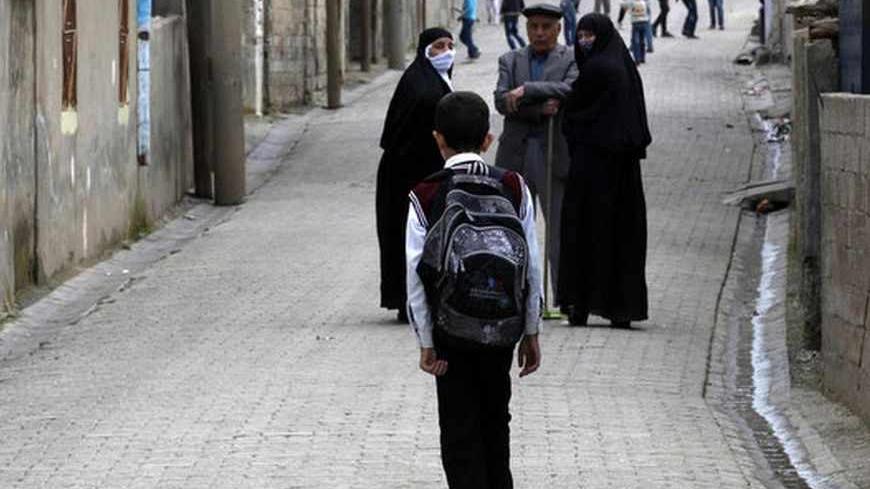 Ferhat Savun, 11, walks to school through the town of Cizre in Sirnak province, near the border with Syria, March 24, 2013. - REUTERS/Umit Bektas

QAMISHLI, Syria — The sparing of Syrian Kurdish regions from the regime's shelling over the last two years has facilitated the launch of several civil society organizations. However, on a daily basis these new associations have to cope with the attempts of Kurdish political parties shaping civil society according to their tenets. In particular, the fragile coexistence of any independent actor with the prevailing political force — the Kurdistan Workers Party (PKK)-affiliated Democratic Union Party (PYD) — risks imploding as soon as this party’s monopoly of the public sphere comes under threat.

Among the challenges faced by these nongovernmental organizations (NGOs) is the struggle against the brain drain of the educated youth who are forced to emigrate because of the dire economic situation and the need to keep impoverished teenagers from turning to weapons. The PYD seems to work in the opposite direction by recruiting young fighters within their Popular Protection Units (YPG) militia, which also appears to provide alternative values to street kids, despite its ideological brand. Only time will tell whether the threats posed by both the regime and the Arab opposition will continue to legitimize this militarization or disappear to make place for a thriving Kurdish civil society.

"In our activities we started to enjoy more freedom as a result of the revolution," Berwin Abdul-Aziz, a member of the women’s rights NGO Shawishka, told Al-Monitor. "Secondly, we benefited from the absence of chaos in comparison with other Syrian regions.”

Even if most political factions exploited the loosening of the regime's grip by setting up their own civil society associations, they are perceived as a burden on every independent initiative.

"There are too many Kurdish parties — it's like a heavy tank hanging from a small tree branch, symbolizing our immature civil society," an instructor who runs seminars on conflict management told Al-Monitor. In Syrian Kurdistan, there are 16 parties.

"We don't accept party members within our organization," says Mahwosh Shaykhi, a member of Shawishka's supreme committee. "We already had cases where a few party members were capable of hijacking our decision-making process."

Despite holding the lion's share of power among political parties, the PYD has left room for freedom of association, so long as it doesn't turn political.

"As long as our activities are not politically motivated, we don't face any problems with the [PYD-controlled] security forces, but we would need their authorization for any kind of demonstration," Baran, a student who organizes cultural events for the Al-Furat University's Kurdish Student Union, told Al-Monitor.

Shaykhi said, "We wanted to organize a protest against mass emigration, but this would have meant applying for a license from the Asayish [security forces]. Hence, we canceled the demonstration, as we neither want to clash with them nor recognize their legitimacy."

Another bone of contention is the YPG's recruitment of minors, a practice clearly at odds with the values of civil society. The PYD claims to rely only on adults, but the presence of underage fighters at the checkpoints is hardly subtle. Shaykhi explained, "We believe the recruiters should be prosecuted, but we cannot afford to launch a campaign against them."

At Shawishka, there are support programs providing specific psychological help to children living in these times of war; they have also started screening movies in cities without cinemas, such as in Qamishli. Supplementary classes have been set up to help children cope with the loss of two years of school from the conflict.

The goal is to keep the youth at a distance from militarization. But those who have received an education only dream about leaving Syria to continue their studies or find work. Many young Syrian Kurds have already made their way to Erbil in Iraqi Kurdistan.

"We're facing a mass exodus. The majority of our youth are leaving for Erbil due to the absence of factories. It’s the legacy of the regime’s marginalization of the Jazira region, even if it has the nation's largest reserves of wheat, oil and cotton," Shaykhi said. "Regardless of all these workshops, we are not able to offer job opportunities to the activists attending them," complained the instructor.

For those who are illiterate and could not find better options abroad, serving the YPG remains a valid alternative.

"Teenagers like to see their words become effective through weapons; it's about power and virility," writer Anahita Hamo (pseudonym) told Al-Monitor.

"The PYD is targeting specific segments of our society; The street youth are easily lured into militancy," Shawishka's Abdul-Aziz remarked. Indeed, most YPG fighters share a similar background.

"Before joining the YPG, I had no job and used to spent my days lost in the streets taking drugs," a 19-year-old YPG fighter using the alias Malek told Al-Monitor.

"I dropped out of school a long time ago. Then I tried to find a job, but it didn't work out, so I ended up on the streets," said another fighter, 20, using the alias Hamid. Most of them do not speak Arabic, as they quit school in their childhood.

The PYD also boasts its own civil society associations, but some argue that all their activities are "filtered" by a totalitarian ideology.

“Their organizations work in the same field, but their approach is that of a Maoist cultural revolution enforced through violence,” said the instructor, who wished to remain anonymous.

The YPG military and educational training shows the clearest ideological features. Salah, for example, is the commander appointed to the main YPG checkpoint between Amuda and Hasakeh. His battalion repeats the pillars of his teachings: “principles, ethics and reasoning.”

However, the former street kids praise the values of the only "diploma" they have ever obtained. Malek said, “Here, I understood the meaning of life and I’ve learned brotherhood. Inside a family there might be disputes, but a comrade is closer than a brother."

"We’ve learned self-criticism to avoid quarrels among us,” Hamid affirmed. All of the young YPG soldiers interviewed by Al-Monitor claimed to be volunteers.

The current attempt to militarize Syrian Kurdish society is clear enough, but views differ on what could bring about disarmament.

“It doesn’t matter if security will remain precarious for a long time. The youth are realizing that the dream of Kurdistan hasn’t become reality and they’re starting to leave the hard life of the barracks,” said Shaykhi, who claimed to have come across several deserters.

“We were not combatants; we just agreed to take up weapons to defend our regions,” YPG commander Salah clarified. “If security and Kurdish rights are achieved, we will abandon armed struggle according to the popular will.”

It remains to be assessed whether the PYD will be in charge of defining this popular will.

Andrea Glioti is a freelance journalist who covered the first five months of the Syrian uprising from inside the country. His work has been published by The Associated Press, IRIN News, openDemocracy, The Daily Star (Lebanon), New Internationalist and numerous Italian and German newspapers.