A shared desire to remain neutral in Syria links the political parties of the Assyrian Christian and Kurdish minorities despite government encouragement of sectarian security branches. 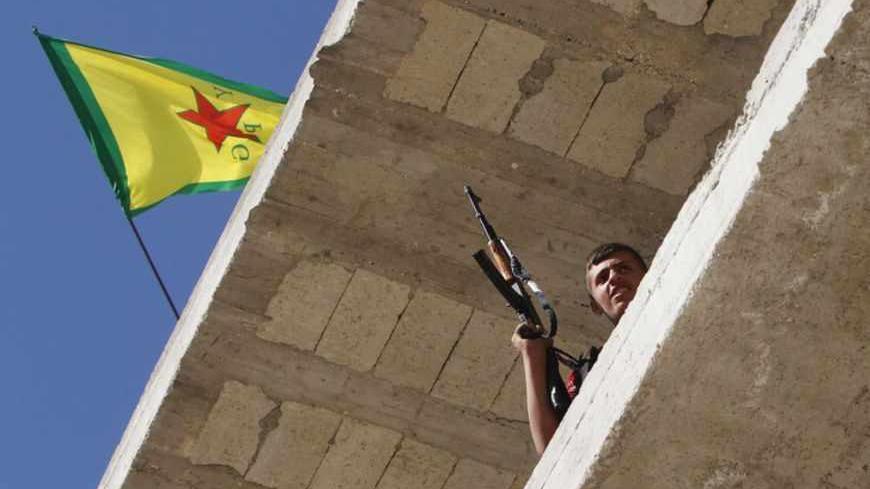 QAMISHLI – Over the last months the Syrian government has encouraged the activities of ethnonationalist parties and the formation of sectarian security branches, such as the Kurdish Asayish and the Syriac/Assyrian Christian Sutoro. These ethnic minorities immediately took the chance to voice their demands, but some of their representatives remain wary of the regime's intention to preserve its political leverage.

Syriacs and Kurds shared similar grievances under the thumb of Baathist pan-Arabism, and the recent rebellion has prompted their political parties to strike an unwritten alliance to maintain their distance from the regime as well as the opposition. The backlash of this decision, however, could be the further entrenchment of sectarian divisions, thus serving the regime's interest in keeping minorities away from the opposition by bestowing concessions upon them.

“Is this a checkpoint of the Free Syrian Army [FSA]?” a worried Christian woman asked on a bus traveling between Amuda and Ras al-Ain. “No, don't worry. It belongs to the [Kurdish] YPG [Popular Protection Units],” replied her husband. Christians tend to feel reassured by the presence of Kurdish militias, and the Democratic Union Party (PYD), the main Kurdish party, is ready to capitalize on this bias.

“We received Christian funding, and the Syriac archbishop of Hassakeh expressed his gratitude for the YPG in a phone call with the Vatican, since they stopped the advance of Islamist radical groups in Ras al-Ain [during clashes in February 2013],” Bashir Malla, a member of the Democratic Society Movement (TEV-DEM), which includes the PYD, asserted to Al-Monitor on May 6.

Syriac political leaders also voice support for the Kurdish political and armed forces. On June 13, Sa'id Malki, Syriac Union Party (SUP) deputy secretary-general, told Al-Monitor, “I don't consider the PYD to stand on the regime's side, as it will never forget how many of its militants were jailed following the rapprochement between Turkey and Syria," referring to the 1998 Adana Agreement. “We have to admit that the Kurds are better organized, and they showed a clearer political program than the [Arab] opposition.”

This Syriac-Kurd entente is rooted historically in the denial of both peoples' rights in Syria. “We're an opposition party calling for the introduction of our language in the state educational system and the constitutional recognition of our people as one of the components of the Syrian people and not as a religious sect,” Barsom Barsom, a young member of the board of the SUP, proudly affirmed.

The Syriac parties remained outside the Arab-dominated opposition for reasons similar to those of the main Kurdish coalition, the Kurdish Supreme Committee.

"We are not part of the Syrian National Coalition, since they recognize us only as a party and not as a people. Therefore we refuse to fight on the side of the Free Syrian Army," SUP's Malki explained. Even the Syriac blocs within the coalition share with the Kurds their opposition to the FSA's expansion into the Jazirah region, regardless of the regime’s presence in Qamishli and Hassakeh.

"We prefer the FSA to remain outside these diversified and sensitive areas. Its breakthrough would draw the regime's violence towards the Jazirah region, thus eliminating a shelter for displaced Syrians," observed Gabriel Moshekorye, president of the Assyrian Democratic Organization (ADO), in a phone interview on June 17.

There are talks to turn the accord between Kurds and Syriacs into a joint security force. “Considering the efficient cooperation with Christian institutions, we’re planning to merge with Syriac security forces in Qamishli,” Ahmad Darwish, Asayish spokesman in Qamishli, told Al-Monitor on April 30. Nonetheless, a number of factors have kept the project on hold.

"Even though the Asayish proposed [that we] merge with them, we decided to stick to cooperation for two reasons: The Syriacs are not yet militarily organized like the Kurds, and there are frictions dating back to the Syriac genocide perpetrated by the Kurds (during the 19th and 20th centuries under the Ottoman Empire)," said J.R., an SUP Swiss Syriac sergeant recruited to train the Sutoro forces and who entered Syria in 2012, explaining the situation to Al-Monitor on June 15.

It seems that the regime's tolerance of the newly established security forces has resulted in a fresh wave of old sectarian rifts. According to J.R., the Sutoro consists of volunteers and is financed exclusively by the SUP. No figures are currently available for it.

"The Sutoro was set up to respond to the vexations of the security forces and the National Defense Force (the institutionalized pro-government shabiha militias), but it hasn't reached the status of an organization yet," Moshekorye told Al-Monitor.

Nevertheless, the goals of the Sutoro are clearly at odds with its conduct and recruiting rules. In Qamishli, the Syrian regime's flag waves undisturbed above the Sutoro station. According to the Swiss sergeant J.R., the National Defense Force had opened fire on a Sutoro car a couple of weeks prior, and its militants subsequently visited the Syriac security branch, bringing with them a Syrian flag and ordering it to be raised.

"I and others disagree on the flag. It has been hauled down twice, but now it's back in its place," J.R. affirmed. "The regime is sending us the message that it can reassert its authority whenever it wants. Those who raised the flag are former shabiha and state collaborators, who fear the government might return as strong as before."

J.R. is clearly a newcomer in the SUP. He dared to speak about the ties between the government and Sutoro, whereas the other members tried to rectify his revelations. Although there is no Syrian flag over their headquarters, the similarity with the ambiguous relations between the Asayish and Damascus goes hardly unnoticed.

The regime's interference is actually among the reasons why the Assyrian Democratic Organization is not supporting Sutoro. "We refused to participate because of the risk of seeing Sutoro succumbing to the regime's politicized pressures rather than remaining a neutral institution," the ADO's Moshekorye revealed to Al-Monitor. "The government is trying to win over Syriac support and this is dangerous." To cast further shadows on his rivals’ credibility as dissidents, Moshekorye recalled how the Syriac Cultural Association, which is tied to the SUP, was officially licensed by the state security forces.

If Christian support was once ensured by church loyalty to the regime, it is now in the form of ethnonationalist institutions that have more or less covertly been grouped under the government’s umbrella.

On the other hand, the regime appears to be sending conflicting signals to the Syriacs by favoring Kurds in a recent decree for the creation of the Kurdish-majority province of Qamishli. “The last decree is a response to the original demands voiced by Jazirah residents to ease economic and administrative matters,” Moshekorye relayed to Al-Monitor, “but it was delayed and issued now to sow disputes between the different components.”

“We don’t know what the plot is behind this decree, but we won’t accept to name this region after the Kurds,” affirmed SUP’s Malki. “We consider all Syrians to be Syriac, as Syriacs were the original inhabitants of this country.”