Race for reconstruction heats up as Syrian war winds down

As the conflict in Syria winds down and reconstruction begins, Iran is racing alongside other friends and rivals for a role in the future Syrian economy. 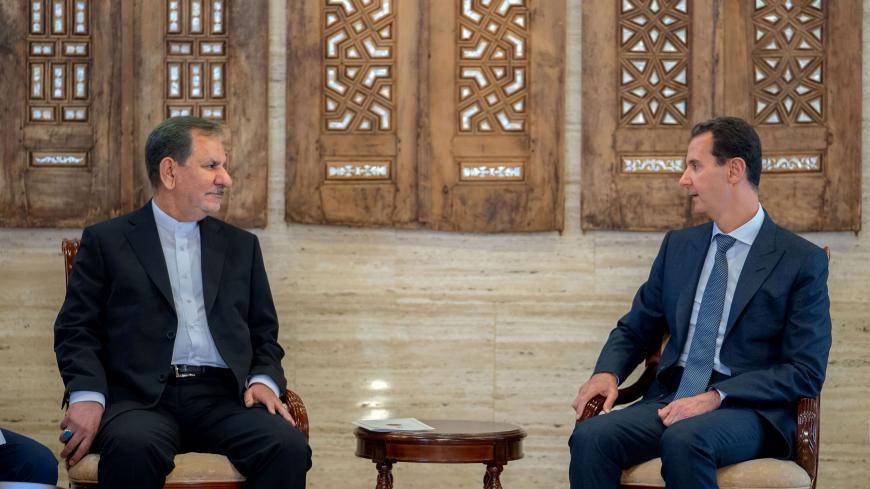 Nearly eight years after the start of the Syrian conflict, forces loyal to President Bashar al-Assad — backed by Iran, Russia and Lebanon’s Hezbollah — have reclaimed control over most territories once held by the rebels. As one of the main allies of Assad, who received Iranian aid in the form of military advisers, manpower and billions of dollars in credit lines to keep Syria’s economy afloat, the Islamic Republic is now trying to widen its role in the war-torn country as reconstruction estimated to cost up to $400 billion begins.

Speaking to Al-Monitor, David Butter, an associate fellow at Chatham House’s Middle East and North Africa program, said, “The main Iranian economic contribution has been through the provision of crude oil at an average of about 50,000-60,000 barrels per day since 2013 on a credit basis. This would work out at about $6-7 billion.”

With the Syrian war nearing its final stages, Iranian officials both from the government and the military ranks have stressed the need to reap economic benefits from the costs they have shouldered. In this vein, First Vice President Eshaq Jahangiri visited Damascus on Jan. 28 at the head of a senior economic delegation. During the two-day visit, Iran and Syria signed 11 agreements and memoranda of understanding that included a “strategic long-term economic cooperation agreement” spanning two decades. The key agreements as reported by the Iranian media focus on industry, trade and agriculture, while the memoranda of understanding relate to education, investment, railways, housing and public services, among other sectors.

At the press conference held after the signing of the accords, Jahangiri noted that Iran and Syria have reached “very important agreements on banking cooperation.” He added that Iran "will be by Syria's side in the reconstruction phase as we have been by its side in fighting terrorism." Syrian Prime Minister Imad Khamis described the agreements as “unique” and added that Iranian companies wishing to invest in Syria will benefit from “legal and administrative facilities."

But local and foreign experts alike are not very optimistic about the impact of the agreements. “The actual Iranian economic role will be limited because of Iran's financial constraints and the reluctance of the Syrian side to give Iranian investors too much control, as has been the case with the blockage of the mobile phone license and the deals signed with Russia for phosphate mining deals,” Butter told Al-Monitor, referring to a memorandum of understanding that Syria and Iran signed in January 2017.

“Although these kinds of agreements can facilitate trade and business between countries, without proper infrastructure such as transportation or banking ties, it is merely a symbolic act that cannot change the realities on the ground,” Iranian businessman Ali Shariati told Al-Monitor. This view is shared by other experts. “In my view, this announcement was mainly political, intended to show that Gulf Arab investment [in Syria] will not be at the price of downgrading ties with Iran. The Syrian regime will try to get better terms for aid and investment through playing off Gulf Arabs, Iran and Russia against each other,” Butter argued.

Although the details of the agreements signed in Damascus remain scant, repairs of several power plants across Syria, construction of a 540-megawatt electricity generation station in Latakia — worth over 400 million euro ($460 million) — and rehabilitation of the ports of Tartus and Latakia are among the projects that have been awarded to Iranian companies. According to Khamis, the wide-ranging deals with Iranians also include dozens of projects in the oil and agriculture sectors and the opening of a permanent fair for Iranian goods in the Syrian capital.

Nearly eight years of war in Syria have cost its economy billions of dollars. According to IMF estimates, the country’s economy shrank over 75% between 2010 and 2015, falling from roughly $60 billion to an estimated $14 billion. Syria’s imports have plummeted from over $18 billion in 2011, reaching an all-time low of $4 billion in 2016.

The conflict has affected Iran alongside other trade partners of Syria. Iran’s non-oil exports to the country reached an all-time high of over half a billion dollars in the Iranian calendar year ending March 20, 2011. That figure slid for years before rising again since 2015.

While Iran’s non-oil exports to Syria might not be as significant compared to that of other countries such as Turkey, China and Russia, it should be noted that the total value of Iranian exports to Syria is likely much higher, given that weapons and other defense exports are not reflected in its export data. It should also not be overlooked that Iran's share of Syria's total imports has increased from 2.9% in 2010 to over 5.43% in 2017.

Lack of secure roads and railways, proper banking ties or regular flights to and from Damascus and the high cost of transportation via shipping lines are just some of the main obstacles that many believe have hindered the expansion of economic ties between Iran and Syria.

“Despite all the costs we’ve paid in Syria over the past years, we still don’t have any significant share in Syria’s trade due to many barriers,” Shariati the businessman told Al-Monitor. “We have a free trade agreement with Syria, but it is not implemented. Getting a license from Syrians to export our goods is nearly impossible since we’ve to pay [a bribe] to every involved government body to secure permits. That would raise the import tariffs to as high as 50% and literally makes the products too expensive,” he added.

Shariati believes that the Iranian private sector might need to alter its strategy. "Instead of focusing on large-scale and infrastructure projects, which are harder to get and have a much greater risk, we should support the [Fast-Moving Consumer Goods] industries such as food, agriculture, cosmetic, soap or detergents among others," Shariati said.

Although the full extent and feasibility of the deals Iran struck with Syria during Jahangiri's recent visit to Damascus remain cloudy, it is clear that Syria is a much higher priority when it comes to security — at least for some of those in the Iranian ruling system.

“The legal presence of the Islamic Republic in Syria is upon request by Syrian officials. Our presence is not for financial gains. Relations between the Islamic Republic and Syria have enjoyed the highest political and economic level over the past four decades,” Ahmad Dastmalchian, Iran’s former ambassador to Lebanon and Jordan, told Al-Monitor.

"In the midst of geo-strategic and geopolitical developments in the region, a new chapter in relations between the two countries will begin which could have profound effects in the region. Now the conditions are ripe for Iran, Iraq, Syria and Lebanon’s Hezbollah — as the winners of the battle — to carry out their strategic partnerships."