Though Syria's blueprint for reconstruction is ambitious, costly and in some ways at odds with Western priorities, there is some cause for optimism in Damascus' marketing of reconstruction opportunities to friendly states. 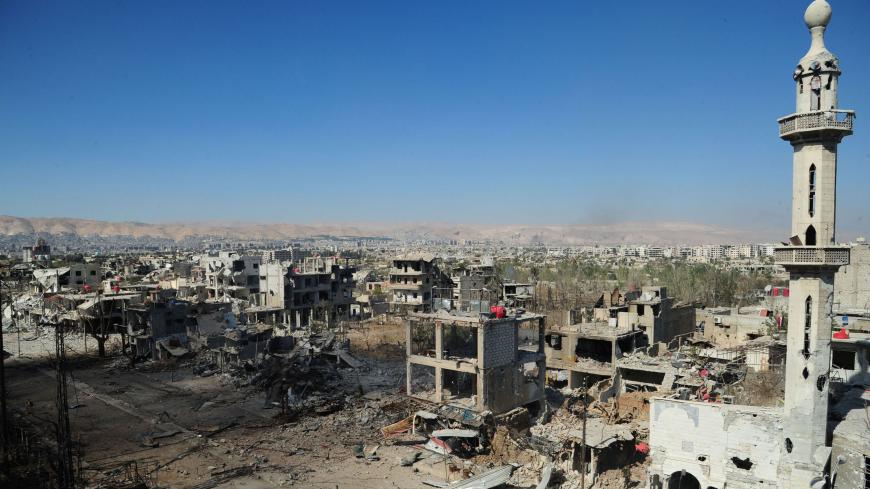 Destruction is seen in the al-Dukhaneya neighborhood near Damascus, Syria, Oct. 6, 2014. - REUTERS/SANA/Reuters

Syria’s President Bashar al-Assad paid a visit to Iran Feb. 25 — his first such trip since the outbreak of the Syria conflict. In Tehran, Assad was promised help with Syria's recovery that Damascus itself estimates will cost an astronomical $250-400 billion.

However, Damascus' blueprint for reconstruction is important. In mid-2017, Damascus produced an ambitious strategy for rebuilding the country, allegedly pre-approved in April by the Central Committee of the Al-Baath Arab Socialist Party. It focuses on economic and social recovery in the face of Western sanctions, giving the green light to companies and businesses from friendly countries to conduct commercial and investment projects, branding reconstruction as a prize for participants with long-term profits and promoting a “destroyer pays” formula, particularly to the Gulf states as sponsors of the main opposition groups.

The Syrian authorities used the annual Damascus International Fair, a respected forum in prewar times that took place in 2017 for the first time in five years, as an opportunity to demonstrate a "quick restart" for Syria. The Syrian leadership also took a series of steps to improve legal and institutional frameworks so as to attract foreign investors and press the local private sector to take a more active reconstruction role. A 2016 law permits partnerships between the government and private companies for the rebuilding of Syria's industries and infrastructure, except in the oil and gas sector, under a council established and chaired by the prime minister.​

Local consultants for the government have outlined several priorities for 2018-2022: construction of electricity plants, solar panels, electrical towers and wind turbines; transportation of energy; investment in railways and improvement of airports; construction of dry freight logistics centers and ports; and production of electrical micro-components and basalt fiber. There has been a growing demand for practical adaptation of public-private partnerships under direct governmental guarantees that are particularly required in the electricity sector.

In June 2017, Assad announced reforms including the creation of an inter-ministerial “assistance center” that together with “electronic feedback” and “human resources” centers would support direct dialogue with regular citizens. This month, Prime Minister Imad Khamis announced he will meet with investors on a weekly basis.

Damascus views economic aid from friendly countries such as Russia, Iran, China and India as a strong driving force of reconstruction.

In 2013, Iran opened a line of credit for Syria worth $3.5 billion and extended it by $1 billion in 2015. During Khamis' visit to Tehran in January 2017, the Iranians obtained the right to operate the phosphate mines in Sharqiya, southwest of Palmyra. In September 2018, Iranian companies agreed to open plants in Syria to produce construction materials and in October, an accord was signed to build a 540-megawatt energy plant in Latakia. On Jan. 29, 2019, the Iran-Syria High Bilateral Committee held its 14th summit in Damascus, co-chaired by Khamis and Iran’s First Vice President Eshaq Jahangiri.

The Russian efforts to raise economic ties to the same level as military coordination and political dialogue have been managed under the auspices of a joint commission on trade, economic, scientific and technical cooperation that met in December 2018 in Damascus. Its priorities included the oil and gas industries, water resources, health care and transportation, meaning the modernization of seaports, railroads and the national air navigation system.

After sitting on the sidelines of the Syrian conflict for some time, the Chinese have been seeking a role since 2016, believing that neither Moscow nor Tehran can benefit from small-scale deals because of their own economic problems. In July 2017, the Syrian Embassy and the China-Arab Exchange Association created an ad-hoc group on Syrian reconstruction in Beijing. The Chinese promised to invest $2 billion in an industrial park in Syria.

India has promised $20 billion for the recovery process (5-8% of the total estimated needs). Despite Prime Minister Narendra Modi’s visit to Israel in July 2017, Damascus confirmed it maintains a “pragmatic relationship” with New Delhi, reassuring India that all prewar joint projects between India and Syria in steel and electricity as well as in the oil and gas sectors will be revived.

Other recent developments give reason for cautious optimism on Syria's reconstruction: Lebanon is expanding the seaport of Tripoli to make it a transit hub to Syria. At the end of 2018, inter-Arab discussions spread about readmitting Syria to the Arab League, aiming to find a counterbalance to the growing influence of Iran and Turkey and coinciding with a visit to Damascus by the President of Sudan. In December 2018, the UAE Embassy was reopened in Damascus, followed by the creation of a Syrian export center in Dubai.

There is more than meets the eye when it comes to Western states. While many are still reluctant to allocate funds for Syria's reconstruction, some are of two minds whether their own influence in Syria should be yielded to the Syria-friendly states. Ericsson, Siemens, CMA-CGM and other companies are asking European governments for protection of their business interests in Syria. The Czechs are in the vanguard, having maintained their embassy in Damascus throughout the conflict. In 2017, the Aradoz brewery was opened with Czech technical aid in a Syrian town of Safita. Brussels wants Syria to stop bleeding refugees. During the conflict, the EU has mobilized $12 billion for food, shelter and medical treatment in Syria and neighboring countries, including $2.7 billion for 2019-20.

In sum, the process of rebuilding Syria will depend upon future political-military developments, international attitudes and the domestic reconciliation process.

by Murielle KASPRZAK and Joseph SCHMID | AFP | May 26, 2022
END_OF_DOCUMENT_TOKEN_TO_BE_REPLACED