Russia faces many barriers in its bid to invest in Syria's reconstruction, including excessive Syrian bureaucracy. 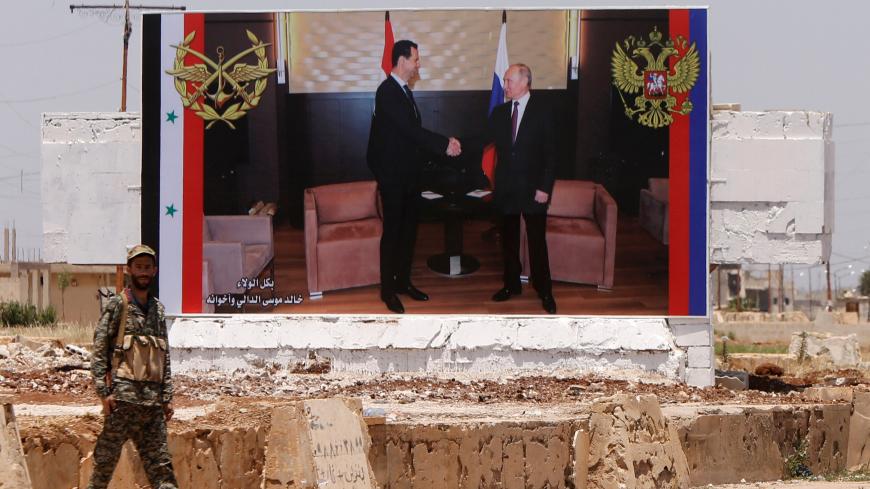 A soldier stands guard near a poster of Syria's President Bashar al-Assad and his Russian counterpart Vladimir Putin during the reopening of the road between Homs and Hama in Rastan, Syria, June 6, 2018. - REUTERS/Omar Sanadiki

The Russian Foreign Ministry reported, "UNDP representatives in Syria have informed us about the current state of affairs in Syria’s early reconstruction and about the results achieved in the context of the implementation of projects with Russia’s donor participation aimed at rebuilding residential areas and basic infrastructure in Syria."

In September 2018, the 60th Damascus International Fair saw substantial participation from Russian companies. At the international fair, a road map of Russian-Syrian economic cooperation was adopted. Priority projects in industry, energy, transport, health care and construction were further discussed in Damascus in December 2018 at the 11th meeting of the permanent Russian-Syrian Commission on Trade, Economic, Scientific and Technical Cooperation. All of these events raised a broad scope of practical issues, including legal issues, related to the participation of Russian companies in Syrian reconstruction.

Since its independence, Syria has witnessed periods of openness, or al-infitah, despite the traditional domination of the Syrian state in economic affairs. These periods of openness include the free movement of capital in 1946-1963; the endorsement of loyal private businesses under Hafez al-Assad’s rule from 1970-2000; and the prewar liberalization and privatization policies during the first years of Bashar al-Assad’s presidency. Thus, both in domestic and international activities, Syrian entrepreneurs and industrialists are accustomed to conducting business in accordance with the rule of private commercial law.

At the same time, Syrian entrepreneurs, especially, medium- and small-sized entrepreneurs, have suffered from too much bureaucracy, corruption, complicated legal practices (such as registration and licensing procedures), the monopoly of “shadow” business groups and threats of raids posed by government-affiliated businessmen, popularly known as “children of the authority,” or awlad al-sulta in Arabic. The raiding and racketeering problems are still there, as Syrian authorities grant concessions to top military commanders, loyalist communities, newly emerged business elites and foreign allies. All of the groups feel entitled to exclusive rewards in the reconstruction business for their contribution to saving Assad’s rule.

The aforementioned legal and institutional problems became visible a long time ago. Over the course of the 2000s, attempts to develop trade and build strategic economic partnerships with Turkey, Arab states, the European Union, China and India faced challenges in dealing with a series of government-adopted legislative acts. These include laws on the establishment of private banks and banking confidentiality (2001); legislative decrees on licensing Islamic banks and on investment in the insurance sector, health and higher education (2005); a legislative decree amending the investment law and a new commercial code (2007); a foreign businesses law (2008); and a legislative decree on the creation of the public Syrian Investment Company (2010).

In 2016 and early 2017, Damascus, inspired by military victories achieved with the support of Russian and Iranian forces, introduced a number of legislative norms aimed to show that the country's socio-economic life was undergoing a revival. They included:

In 2016, a new law came into force that enacted public-private partnership (PPP). Its major goal was to ensure long-term investment contracts based on public-private consortiums with foreign participation in infrastructure and other sectors, except oil and gas exploration. The PPP Council was established under the chairmanship of the prime minister of Syria.

Russian companies repeatedly expressed interest in participation in the Syrian reconstruction based on PPP principles. However, to the day, they are anxious about relevant legal issues, mainly, guarantees and conditions of return from their financial and technological investments. This dictates the need for real-life adaptation of the PPP tools and algorithms.

The second problem relates to the necessity of enhancing the transparency of tender procedures. Russian companies, especially those that have never worked in Syria before, are particularly concerned with having clear guidance on the procedures, which would be made publicly available, either on governmental websites or other public sources.

The third problem deals with Syria's weak mechanisms of international arbitration. The country needs full-scale arbitration structures, similar to the Lebanese Arbitration and Mediation Center, which is used nowadays by the Syrian private sector. Meanwhile, Russian companies are often reluctant to use Syrian state courts for the resolution of commercial disputes. This is due to longtime routine practices and high costs of judicial representation of their interests in Syria.

In a nutshell, the main challenge for Syrian authorities in attracting business partners and investments from Russia and other countries is the need to modernize the local legislative base, eradicate excessive bureaucratic measures and improve legal practices.

Economy and trade
Russia in Syria