Russian companies continue to explore investments in Syria's reconstruction, which could be a boon to them given the Western sanctions against Russia. 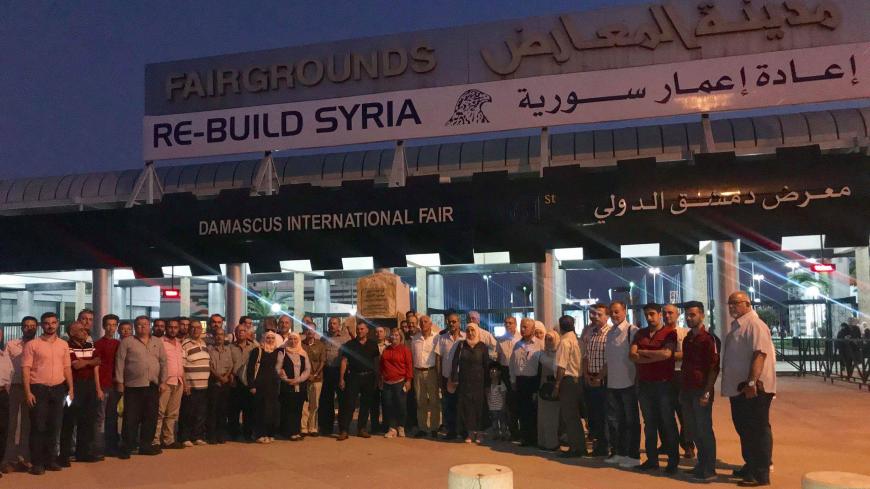 Despite warnings by the United States to allies and others not to attend Rebuild Syria 2019, an industry, agriculture and infrastructure exposition held Sept. 17-21 at the Damascus Fair Grounds, some 390 businesses from 31 countries chose to participate. The occasion marked the fifth consecutive year for the expo, organized with an eye toward the future reconstruction of Syria.

Washington has in the past issued general warnings that countries hold the line on sanctions against Iran and avoid all business fairs in Syria, asserting that they are basically “Iranian events” due to Tehran’s sponsorship or prominent presence at them. Indeed, Iran's ambassador to Syria, Jawad Turk Abadi, participated in the ribbon-cutting ceremony this year, and 84 Iranian companies, more than one-fifth of the total, were in attendance. Russia also made its presence known with a stylish, 1,116-square-foot pavilion hosting 10 midsize private sector companies from seven regions. A few Chinese companies attended, and they had no pavilion.

Data that Al-Monitor obtained from the Russian delegation at the expo showed that Russian participants were from the business-to-business (B2B) sector, in other words, not publicly funded. This year, Russia's Ministry of Industry and Trade only provided participating companies non-financial support, according to a source in the Russian delegation, likely including help with organizational issues and providing necessary contacts.

Since Russian participants had to pay their own way, their attendance at the expo was suggestive of their level of desire to tap Syrian markets. In parallel, Russian industrialists have been examining possibilities for setting up local manufacturing with a view toward eventually also gaining access to markets in other Arab states, among them Iraq, Lebanon and Jordan, via the “Syrian industrial hub” of intra-Arab foreign trade.

A official with the Center for the Development of Innovation Projects (CDIP), a Moscow-based private entity, who spoke to Al-Monitor on the condition of anonymity, said his outfit had organized a business mission for Russian companies on the sidelines of Rebuild Syria, making it the second such mission this year. The previous mission, Russia-Syria: The Road Map of Possibilities, took place June 24-27, with 14 companies from 11 Russian regions represented.

The two missions combined involved companies from 16 Russian regions, from Moscow and central Russia to the Volga region and Siberia. This reflects the developing trend of efforts at the regional level to enhance trade and economic links with Russia-friendly states to compensate for losses stemming from Western sanctions imposed against Russia. Several entities from Belarus and Kazakhstan reportedly also participated through their Russian subsidiaries. The Russian companies that attended the expo specialize in a range of sectors, including industrial manufacturing, agriculture, construction, equipment for solar energy, oil and gas exploitation and mining, railways, information technology and cybersecurity.

The Russians met with Syrian officials under the auspices of the State Planning and International Cooperation Commission and the Syrian Investment Agency. In addition, the Russian companies established direct B2B links with local private partners with the support of the Syrian-Russian Business Council, chaired by Jamal al-Din Kanbariya, a prominent Syrian entrepreneur and industrialist. The Syrian Federations of Chambers of Commerce and Industry also facilitated contacts.

Business representative discussed the prospects for joint investment projects and B2B and B2G (business-to-government) ventures with the Syrian private sector serving as an intermediary between foreign traders and investors and the Syrian public sector.

On the sidelines of Rebuild Syria this year, Russian participants paid visits to industrial zones in Adra, in Damascus province, and Hassija, in Homs province. They had the opportunity to size up performance and to learn about the experiences of Syrian and other enterprises involved there. According to Adra authorities, the zone currently hosts 2,730 registered businesses. In Hassija, residents said the zone hosts foreign companies and joint ventures from Egypt, Iran, Iraq, Kuwait, Lebanon, Pakistan, Saudi Arabia and even Denmark.

The June business mission, together with Russian participation in Rebuild Syria, indicates that midsize Russian regional businesses are interested in Syria for export, industry and investment. Such activity could emerge as a remarkable bonus to Syria leasing the Mediterranean seaport of Tartus and other big commercial projects to Russian firms, cementing bilateral Russian-Syrian economic cooperation.

Much, however, remains to be done, given the risks and challenges involved. Among the hurdles are the lack of established, trusted B2B partnerships and reliable data on the Russian products and technologies possibly bound for Syrian markets, the dearth of sustainable financial mechanisms for serving mutual trade and the reluctance of Russian entrepreneurs to act amid the sanctions against Russia and Syria.