Syria has high hopes for ties with Crimea — maybe too high? 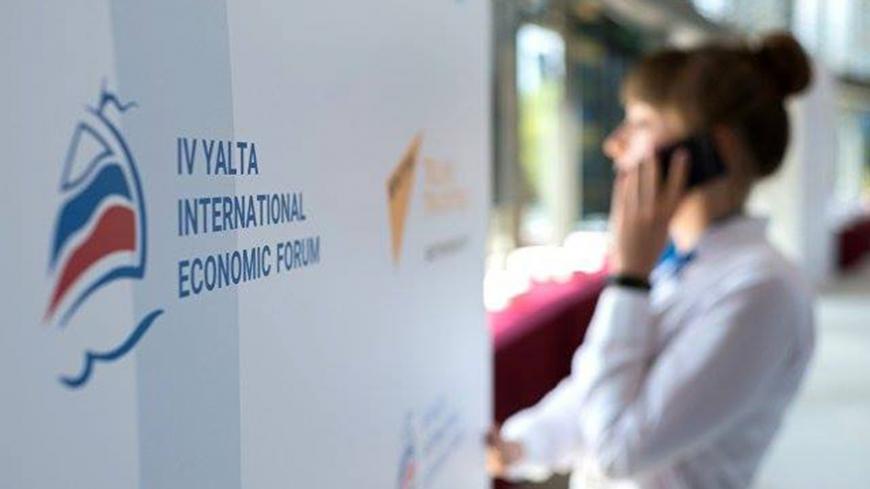 The Yalta International Economic Forum, to which Syria has received an invitation, will be held in April 2019. Posted May 24, 2018. - Facebook/forumyalta

In a sign of growing relations, Syria plans to participate in an honorary capacity in the 2019 Yalta International Economic Forum (YIEF) in the Crimean Peninsula, set for April 17-20. Syrian President Bashar al-Assad has said he hopes to attend, as Syria and Crimea are seeking to develop their economic ties and encourage joint investments.

Andrey Nazarov, co-chairman of the YIEF Organizing Committee, said Nov. 9 that a Syrian delegation will attend for the second consecutive year. In April, a delegation headed by Syrian Minister of Economy Samer al-Khalil and including 80 businesspeople and representatives of Syrian governmental organizations attended the fourth YIEF. During that forum, Yalta and the Syrian port city of Latakia signed a twin-city relations agreement.

The forum is held annually in Crimea, which until 2014 was part of Ukraine. The gathering is organized by the local government and supported by the YIEF Fund, with direct support from the Russian presidency. Russia controls Crimea.

The activities and visits herald a new stage of cooperation between Syria and Crimea. This developing relationship is prompted in part by Western sanctions imposed on both Crimea and Syria for political and military reasons. Relations between the two have become a subject of discussion in high-ranking circles and ultimately, both sides seek practical solutions to overcome the repercussions of international boycott.

On Oct. 15, Crimean President Sergey Aksyonov arrived in Damascus along with an economic delegation and attended a conference — “Crimea: A Basis for Growth of Syrian-Russian Relations." On the sidelines of the conference, Aksyonov said the situations in Syria and Crimea constitute a good basis for developing their relations. He told Al-Watan newspaper, “Our work gave good results, and we have found solutions to several problems.”

In the wake of the Ukrainian revolution that broke out in 2014, Russia annexed the territory. In March 2014, a controversial referendum was held in Crimea, and its results showed 96% of the people supported the annexation. But Ukraine, the United States, European Union and Canada consider the referendum illegitimate. The United States later imposed sanctions on Russia, issuing travel bans and freezing the assets of Russian figures and organizations. The EU also banned its companies and individuals from investing in Crimea and halted European exports to the peninsula. The sanctions are still in place.

Taha Abdel Wahed, a Moscow-based expert on former Soviet republics, told Al-Monitor the Syrian regime will not receive any privileges for its acceptance of Crimea's affiliation with Russia, which he said amounts to Syria's “political sycophancy” to Russia. Syria hopes to get contracts and other deals to ensure its economic vitality, he explained, but the rapprochement is happening because “Russia is seeking to launch the reconstruction of Crimea."

Some observers see potential benefits for both sides, however.

Crimea is a key wheat supplier to Syria, which was the second-largest buyer after Lebanon in the second half of 2017. From mid-2017 to May 2018, Crimea shipped at least 170,000 tons of wheat to Syrian ports, Reuters reported in June. Syria's agricultural production suffered hugely from the war, so by cementing relations with Crimea, the Syrian regime guarantees itself a regular flow of wheat.

Wheat is considered a strategic crop for Syria, and having a strong reserve is an important factor in national security. Syrian wheat production has dropped from 4 million tons a year before 2011 to 1 million tons in 2018. The Food and Agriculture Organization said that this year has been Syria's least productive in 30 years, due to the war and drought.

But relations aren't improving just because of wheat. During the Crimean president’s Oct. 15 visit to Damascus, the two sides agreed to establish the Syrian Trading House in Crimea and a joint shipping company. The coordination agreement that was signed in Yalta back on April 4 paved the way for these projects. In October, the sides also discussed plans to revive touristic cooperation and elevate trade to make Crimea a doorway for Syrian products — mainly citrus fruits — entering Russia.

However, the rapprochement might complicate the Syrian regime's situation internationally. The West imposed sanctions on Russia after it annexed the peninsula, and the sanctions affect any Russian or foreign company that cooperates with the Crimean government.

Yet Syria considers its relations with Crimea a chance to move forward. Mohamed Hamsho, a Syrian businessman and secretary at the Federation of the Syrian Chambers of Commerce, said in a press statement Oct. 16, “The fields of cooperation between the two countries are very wide, in terms of investment or exports and imports in foreign trade. This is added to the organization of joint exhibitions, the mutual visits of business delegations and the participation in reconstruction operations.”

Businessman Samer al-Debs, head of the Chamber of Industry for the greater Damascus area, believes Crimea has many prospects in Syria in metal, mechanical and chemical engineering; oil and gas; mineral water; and food production.

Construction material companies in Crimea are getting ready to participate in reconstructing Syria. They want to benefit from the Syrian government’s quest for openness to new neighboring and regional markets after regaining control of most of the country's territory, including the Nassib border crossing with Jordan, which reopened in October.

But Abdel Wahed doubts Crimea will be significantly involved in Syria’s reconstruction. “Crimea will only be able to implement some projects in sectors of the Syrian economy that are under Russian control," he said. "And this participation is only possible if the Syrian situation remains as it is — if no international political settlement is reached and the international community shows no progress in its contribution to rebuilding Syria.”

If Crimean companies do take part in the reconstruction, the Syrian regime might face more sanctions. Their participation also could "eliminate the international community’s potential role in this area," Abdel Wahed noted. "The West is firm about all issues related to the Ukrainian crisis and its repercussions, specifically when it comes to Russia’s annexation of Crimea.”