Syria is slowly being seen less as a military liability and more as an investment opportunity, though there are still many potential challenges. 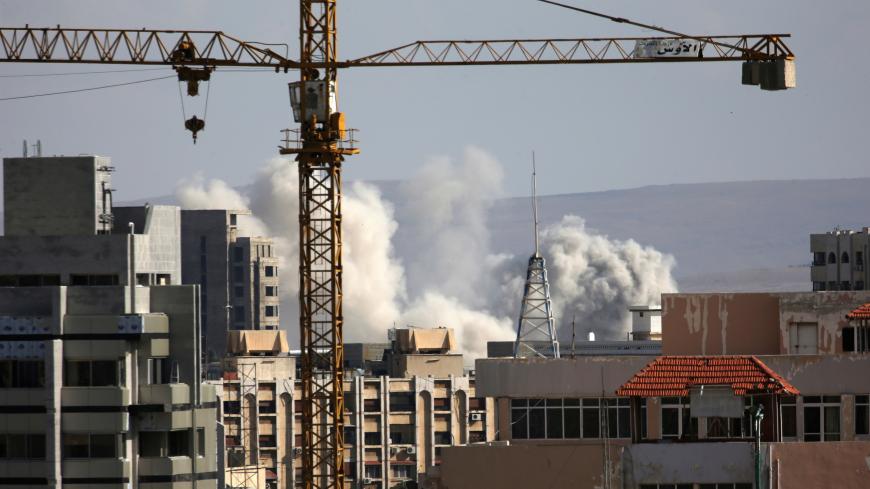 Until recently, the system of checks and balances that foreign stakeholders sought to build in Syria relied primarily on military means, but now there is a more pronounced leaning toward economic methods, especially by Russia.

For example, a new bridge connects Russia’s mainland to the Crimean Peninsula, which can become the main transportation route from Russia to Syria and help restore Syria’s infrastructure, said Georgy Muradov, the deputy chairman of the Crimean Council of Ministers, when he spoke in February at a forum on Russian-Syrian business cooperation.

The $3 billion, 12-mile span opened almost simultaneously with a May 14 ceremony to lay the foundation stone of a Russian-Syrian tourist site in Manara, in Syria’s Tartus province. The two developments have certain things in common. Each project involves a person believed to belong to Russian President Vladimir Putin’s inner circle, and both men have been on EU and US sanctions lists. Construction of the $3 billion Crimean Bridge, also known as the Kerch Strait Bridge, has been run by billionaire Arkady Rotenberg, one of Putin’s friends since childhood. The Manara project is linked to Gennady Timchenko’s construction company, Stroytransgaz. Timchenko, a Russian oligarch, is another of Putin’s old friends.

Other developments are also in the works. In April at the Yalta International Economic Forum, Crimea signed a memorandum of intent with Syria’s port city of Latakia for projects worth 62 billion rubles ($997 million).

There are some drawbacks to Russian-Syrian partnerships. Syria hasn’t yet granted preferential treatment to Russian exports, and the current lack of Syrian infrastructure to store, process and transport goods to Russia remains a serious challenge.

Representatives of the Syrian government have told the Russian RBC business news agency that Russian businesses aren’t necessarily enthusiastic about Syria just yet, given the small size of the market at this stage and the associated risks posed by sanctions, which far exceed potential profit. Anti-Syrian sanctions have forced large companies with a vested interest to carry out their operations through a chain of intermediaries to skirt restrictions.

Late in January, the Russian Energy Ministry said a road map providing for the rehabilitation, modernization and construction of new energy facilities in Syria had been signed. The ministry hasn’t provided details yet, but Russian media report that the document contains a list of companies that are supposedly ready to risk working in Syria. Among them is Evro Polis LLC. The company is supposedly controlled by the “Kremlin’s chef,” restaurateur Yevgeny Prigozhin, whose name is associated with the controversial private Russian paramilitary group Wagner PMC. Prigozhin is also said to be closely involved with Russian internet trolling operations.

Stroytransgaz has had a notable presence in Syria. Late in 2017, its specialists launched the final phase of the construction of the Northern Gas Processing Plant (GPP-2) near Raqqa, and it began to rebuild the Khunayfis and Al-Sharqiyah mines, the country’s largest phosphate mines outside Palmyra. But it’s a tough call whether Timchenko’s company will manage to complete construction of the Manara tourist site. These days, the military and political environment is much more complicated than that of the prewar period.

As for the oil and gas industry, it is riddled with problems. On one hand, amid the country’s aging infrastructure, oil production started to decline long before the Syrian war. On the other hand, the return of Syria’s energy system to prewar operation levels is hampered by several factors. This is in part because of infrastructure degradation, but also because major oil fields are controlled by the US-backed Syrian Democratic Forces (SDF), and Western countries still punish Bashar al-Assad’s regime economically through sanctions and aid boycotts.

Areas of eastern Syria and two de-escalation zones in the north and southwest are still outside Assad’s control. This prevents Damascus from restoring sovereignty, on the one hand, but may help its economically vulnerable allies on the other. However, Russian efforts to reach compromises in these areas don't align with Iran’s position. Tehran, Moscow’s tactical partner, actively participates in Syria’s social and economic life, which gets on the nerves of the United States, Israel and the Persian Gulf monarchies.

Any concessions from the US-led international coalition are related to constraining Iran in the region — for example, the potential dismantling of al-Tanf military base at the Syrian-Jordanian-Iraqi border, and the opening of the Damascus-Baghdad highway. Moscow would like to keep its agreements with Washington concerning the de-escalation zone in southwest Syria, to get the United States to reduce its presence in the east and to prevent the US campaign from deploying Arab fighters to SDF-controlled territory — which would reduce Syria’s prospects of integrating its eastern territories.

There is some scope for compromise. Iran-backed foreign proxies have left some areas in Syria for Iraq, with Syrian government forces replacing the militias with their own soldiers in Daraa. At the same time, Iran’s intelligence services have started to recruit eastern residents to a Hezbollah-type group in Syria to preserve Iran’s influence on the ground. This may affect prospects for Syria’s recovery. However, for Russia to implement its own recovery plans for Syria, Moscow has to ensure the stability of Syria’s postwar security and find ways of maintaining leverage over Damascus against the background of close Syrian-Iranian interaction.