In the face of US sanctions, Moscow is considering whether the outsourcing of reconstruction efforts for Syria may be better for Russia than a long-term presence. 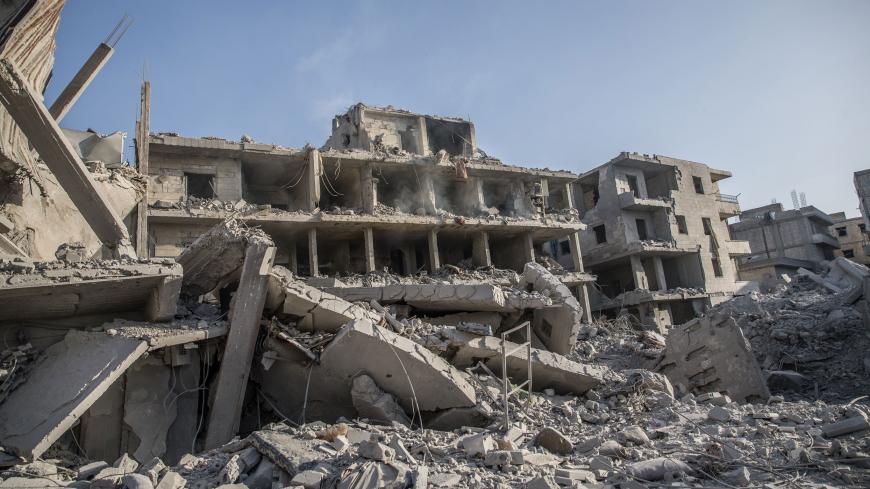 Damaged buildings are seen after having been bombed in Afrin, Syria, March 19, 2018. - Halil Fidan/Anadolu Agency/Getty Images

On Dec.17, Russian Deputy Prime Minister Yuri Borisov visited Syria for a meeting with President Bashar Al-Assad. Following the encounter, Moscow announced ambitious plans to broaden its support for Syria’s reconstruction. This could mean $500 million for the development of the Tartus seaport — including building a grain hub — with a view to link the Syrian Mediterranean coast to the Arab Gulf via a railway. Russia is also eyeing investment in the exploration of oil and gas and the allocation of $200 million to restore a fertilizer plant in Homs.

The Russian government has already adopted decisions to, first, deliver another 100,000 tons of grain as humanitarian aid — from the end of this year until spring — and, second, to provide $17 million for UN relief efforts in Syria. These announcements came on the eve of the 12th meeting of the Russian-Syrian Commission on Trade, Economic, Scientific and Technical Cooperation to be held Dec. 23-25 in Moscow. The commission is co-chaired by the Deputy Prime Minister Yury Borisov and Syrian Foreign Minister and Deputy Prime Minister Walid Muallem.

The decisions taken by Moscow raise a key question: whether they signal the Russia’s readiness to sponsor the buildup of a long-term economic presence in Syria, similar to the military and diplomatic efforts Moscow is conducting, or is just laying the foundation for limited and targeted operations. The broader strategy would mean the elaboration of a broad agenda for trade and economic dialogue. The more narrow approach would mean handing over reconstruction efforts to a handful of big private businesses aligned with the Kremlin in tandem with their selective local partners.

At first glance, Moscow seems to be serious about recognizing Syria’s economic reconstruction as part of the national reconciliation process that would address the goals laid down in the 2016 Foreign Policy Concept of the Russian Federation. The document guides Russia’s foreign and international policies. In practice. this means Damascus should be viewed through an economic lens as well as being a partner in the Kremlin’s efforts to ensure the international recognition of Crimea as well as of Abkhazia and South Ossetia. For instance, inviting the Syrians to the 5th Yalta Economic Forum in April 2019 was meant to serve that goal.

Since 1993, the Russian side has been preserving the “government-to-government” dialogue with Syria under the auspices of the bilateral Commission on Trade, Economic, Scientific and Technical Cooperation. This dialogue is supplemented by the “business-to-government” format with a view to provide direct assistance to Russian middle-size businesses for their access to the Syrian markets. This policy is embodied in a road map of energy cooperation with Syria (dated February 2018) and a road map for trade and industrial cooperation for the period of 2019-2021 (adopted in December 2018). Last year, some plans were discussed to create a federal agency for facilitating Russia’s role in Syria’s reconstruction; these, however, remain unfulfilled.

Over the past two months the Syrian pound has lost 40% of its value. The uneasy domestic situation in Syria, characterized by the huge depreciation of the national currency, low hard-currency reserves, the continuing disruption of the territorial integrity and sanctions against the country all hinder opportunities for rapid reconstruction.

To date, Moscow’s high-level efforts aimed at persuading the EU and Gulf Cooperation Council states to invest in Assad’s Syria have not led to visible results. Lebanon’s capabilities to serve as a “bridge” for Syria’s reconstruction for Russia as well as China have been deteriorating due to the Lebanese domestic crisis.

Russian businesses have demonstrated reluctance to carry out independent moves on the Syrian track in the business-to-business format. There has been a deficit of positive business-to-business experiences and far too much bureaucratic red tape. This is not to mention the difficulties involved in banking transfers, especially after the closure of Russia's Tempbank, which was sanctioned by the United States for providing services to the Syrian authorities. Russian entrepreneurs also suffer from a “Syrian war” syndrome, still fearing the lack of security. It seems that the Russian Export Center, for similar reasons, has been abstaining from direct activities in Syria in favor of projects in neighboring Arab countries.

This explains to a large extent why, despite demonstrations of interest and the attendance of businesspeople from both sides at the Russian-Syrian Intergovernmental Commission’s meetings, only a few Russian-Syrian deals were concluded in the business-to-business format. The two recent examples are the Electronic Certification Center, established in September by Rusinformexport in cooperation with the Syrian National Agency for Network Services, and the commercial supply of 144 Russian construction machines for the Syrian Ministry of Public Works and Housing.

Under such circumstances, a narrow approach has been emerging as more preferable for Moscow.

Russian companies have four advantages when it comes to the Syrian market under this approach.

One is that big companies such as Stroytransgaz, with a record of successful work in Syria dating to 2000, are capable of addressing the pending needs of Damascus in restoring the war-damaged mineral resources sector, including the extraction and exports of oil, gas and phosphates, recognized as a vital source of the hard currency needed for Syrian economic reconstruction.

A second advantage for Moscow is that Russian companies are also able to work in different parts of Syria, including in the northeast and east, based on Russia-Turkey accords. On Dec. 17, the Syrian parliament authorized contracts that had been signed a few months before on the sidelines of the 61st Damascus International Fair between the Syrian Ministry of Oil and Mineral Resources and the Russian companies Mercury and Velada. The companies are not widely known in Russia, which may indicate they are fronts for bigger Russian businesses.

A third advantage is linked to the bigger financial potential of leading Russian private companies as compared with the moderate size of funding that would come from Russia’s state budget. The clear example here is the above-mentioned Tartus seaport and Homs chemical factory projects that could reach $700 million; meanwhile, Russia's donation for Syria through the UN was $17 million. The Tartus and Homs projects are both reported to be run by Stroytransgaz affiliates.

Finally, big Russian companies, which are able to use armed bodyguards to solve their security issues, have emerged as a counterbalance against Tehran's claims that Iran should have the dominant economic role in Syria.

The minuses of the narrow approach reside in the medium and long term. Much will depend on the future division of roles between Russia and other players, such as Iran, Hezbollah, China, Turkey, Gulf Cooperation Council countries and the United States, as well as on the fate of the sanctions, the outcome of the Syria peace process and the restoration of countrywide economic links. But if Syria’s isolation in the Arab world and the West ends, a narrow approach to Syria's recovery that lacks a diversified Russian economic presence could put at risk the whole framework for Russia’s role in Syria. A broad approach therefore could easily be seen as a better strategic option.