Is Belarus scheming against Russia's reconstruction policies in Syria?

Belarus is tacitly promoting its own businesses in Syria, but not all of them are necessarily to the detriment of the Russians. 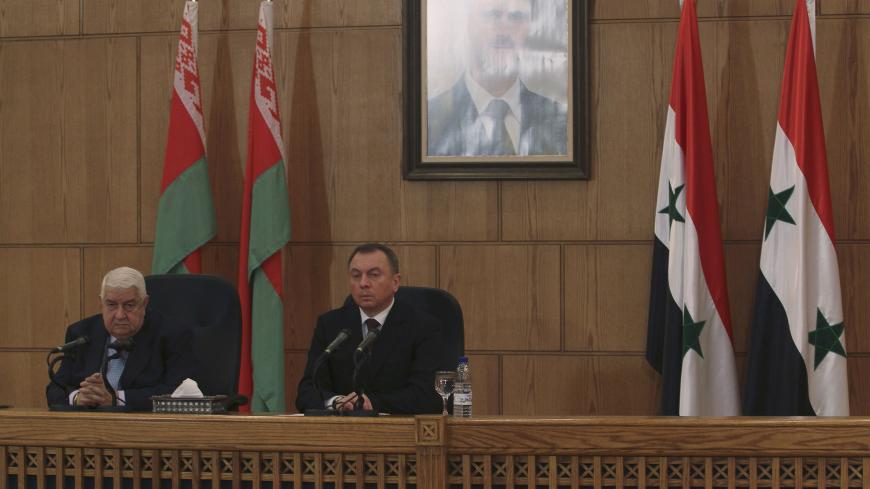 On Aug. 29-30, the seventh meeting of the Belarusian-Syrian Commission on Trade, Economic and Technical Cooperation convened in Damascus. The event was co-chaired by Pavel Utiupin, the minister of industry of Belarus, and Suahail Mohammad Abdullatif, the Syrian minister of public works and housing. The meeting produced seven documents on a wide range of issues. These included the following: foreign trade, marketing and pricing; radio and TV communications; high education and academic science; investment; agriculture; veterinary service; and health care and the production and exchange of medicines. In December 2018, the 11th meeting of a similar commission with Russia took place in Damascus. Against the background of rising complaints from the local Syrian business community about slow progress in the business-to-business format with Russia in the aftermath of that meeting — the 49-year rental of the Tartus seaport that emerged from that meeting doesn’t count, given the amount of political will behind it — August's meeting with the Belarusians heated up speculation over whether Minsk is actually competing with its ally, Moscow, in Syria.

On Aug. 28, Utiupin and Belarusian Health Minister Vladimir Karanik joined Syrian Prime Minister Imad Khamis at the opening ceremony of the 61st Damascus International Fair. They visited the “Made in Belarus” exposition, which housed 14 industrial, science and technology, medical and food enterprises, among them the Minsk Tractor Works, the Minsk Automobile Plant, the Minsk Motor Plant, the Sohra Group, the BelMAPO medical academy and the NatiVita pharmaceutical company. Russia was represented by 16 companies — a stark contrast with the 37 enterprises present at the fair last year when the Russian delegation was headed by the deputy minister of industry and trade. Both Russia and Belarus were well behind Iran in representation — nearly 100 Iranian companies participated.

Syria has established active bilateral business councils with both Russia and Belarus as part of its effort to establish business-to-business connections and generate mutual projects with the two countries. Yet a few Syrian entrepreneurs from medium-sized companies, who spoke with Al-Monitor not for attribution, said there are more favorable conditions for business travel to Belarus than to Russia, including obtaining the procedures to receive entry visas. Some businesspeople inaugurated small investment projects in the Belarusian countryside for organic food production by first purchasing former Soviet agro-farms. In 2018, the trade between Belarus and Syria grew to $41.1 million (with Belarusian exports worth $37.7 million, compared with just $6.3 million in 2017). In January-May of this year, the mutual trade was greater than $16 million (with Belarusian exports at $12.6 million). Interestingly, Syrian duty free shops became filled with Boss and other brands of Belarusian (but not Russian) vodkas, competing with the French vodka Grey Goose.

In the absence of Syrian arrangements with Russia in the sphere of health care, Belarus is trying to intensify such cooperation and to gradually convert it into an exclusive one. This is why the list of seven agreements recently signed in Damascus included an executive protocol for a road map for implementing an agreement signed in May 2016 between the Syrian and Belarusian health ministries for the production and mutual supply of medicines and medical equipment.

Both Russia and Belarus have big producers of automobiles, construction, agricultural and special machinery and military equipment, and of relevant spare parts. Both countries have been viewing the Middle East as a priority region in terms of sales of a wide range of such products, with Syria not being an exception.

Corporate strategies of Russians and Belarusians in Syria also seem to differ considerably. The Russian Gorkovsky Automobile Plant (GAZ), KAMAZ and other Russian holdings that are under Western sanctions demonstrate a reluctance for independent actions, relying primarily on the Permanent Russian-Syrian Commission for Trade, Economic, Scientific and Technical Cooperation, as well as on the Russian Ministry of Industry and Trade as intermediaries in dialogue with Syrian counterparts. The Belarusian side, in turn, demonstrates more ability to facilitate deals in the business-to-business format.

For instance, in April 2017, the Minsk Automobile Plant (MAZ), with the assistance of a prominent member of the Syrian-Belarusian Business Council, signed a lucrative contract to supply 157 dump trucks for the Syrian Ministry of Public Works and Housing. Occasionally, Belarusian exporters even use Syrian partners to enter markets of neighboring Arab states, trying to sell heavy machinery in Lebanon through Sakkal & Sons Co.

Good business-to-business positions do not mean, however, that Minsk disregards the much stronger political position of Russia in Syria. Despite the rather aggressive export strategies used by the Belarusian side — such as allegedly hindering modest attempts by Russian competitors such as Concern Tractor Plants or Volgabus to gain market share — a case was reported in June where the Minsk Tractor Works (trademarked Belarus) used a company, registered in Russia, as a front line to present products for Syrian officials in the business-to-government format within the framework of a Russian business mission to Damascus.

Does all this make Russia and Belarus real competitors in Syria? The answer is no and is rooted in different dimensions of Russian and Belarusian involvement in Syria’s economic reconstruction. For Moscow, the economic role is embodied in large-scale projects in the spheres of mineral resources, energy, transportation and critical infrastructure. The management process is being largely outsourced to big companies such as Stroytransgaz. The view here is to compensate at least partially the costs related to war operations. For Belarus, which is located in, but to large extent isolated, from Europe, Syria is viewed as a prospective market for sales, even at dumping prices, which can afterward be compensated for within the framework of the Russia-Belarus “Union State.” It could be said that businesses from the two countries, when it comes to Syria, are operating in different spheres.