Moscow is clinging tightly to its Syria policy, believing that the regime is the best option for controlling the Islamic State and worrying over the economic situation that will inevitably emerge from the conflicts there. 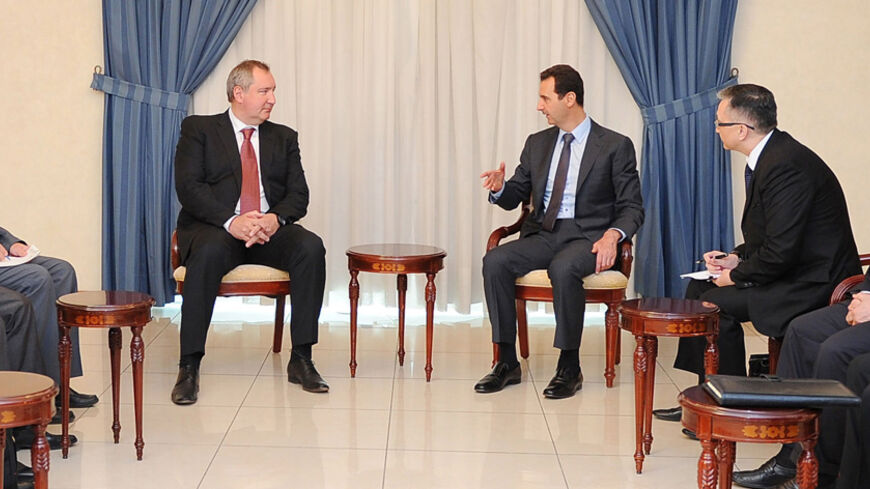 Despite developing relations with a number of Arab states that wish to see the toppling of the regime of President Bashar al-Assad, Russia is not changing its position on Syria. At the same time, although Moscow seems to be acting without a backward glance at Iran, some experts believe it will take into account certain nuances in Iran's regional policy. In Russian official circles, Damascus is considered the force most capable of stopping the jihadists from the Islamic State (IS) and other terrorist organizations, and cooperation with the Syrian government is vital to the struggle against IS. Moscow is decisively against classifying the extremists as “bad” or “good,” viewing such positions by Western and some regional countries as short-sighted. Russian analysts are also expressing concern over the extremely complicated economic situation in Syria as a result of the bloody and destructive conflict.

At the Oct. 22-24 meeting of the Russia-Syria intergovernmental commission on trade, economic and scientific research cooperation in Sochi, Russian and Syrian representatives discussed how to strengthen cooperation between the two countries. On Oct. 23, Kommersant, citing economic sources in the Russian government, reported that Syrian representatives led by Minister of Finance Ismail Ismail were going to ask Russia to grant them a state credit in the amount of $1 billion. Syria is badly in need of these funds to support its currency exchange rate and to fulfill social commitments. According to the publication, the Russian Finance Ministry responded coolly, probably taking into account both Russia's own complexities caused by sanctions and the fact that all official Syrian financial organizations are sanctioned by the United States and European Union. At the commission's previous meeting in May, the decision was made to provide a 240 million euro ($300 million) grant to Syria to resolve a number of social problems.

This time, according to the Russian media, the parties discussed a number of serious issues pertaining to Moscow-Damascus economic cooperation within the framework of the Eurasian project. Taking into account that Syria had previously submitted an official request to create a free trade zone with Russia, at this time another agreement was executed. Some specific issues of commodities exchange development, probably more important than they were before the Ukrainian crisis, were also reviewed in Sochi. Deputy Minister of Economic Development Alexey Likhachev told the TASS news agency that in late December, at the meeting of the Eurasian Economic Commission (EEC), where one of the issues to be discussed would be “nonpreferential agreements” on the “green corridors” zone, the EEC would make a proposal on Syria, but the decision would have to be made by the president.

Russian companies show interest in large projects such as oil and gas field development or power plant construction, but have serious doubts about initiating them in conditions of armed conflict. However, this discussion was about post-war reconstruction of the country. Vice-Prime Minister Dmitry Rogozin, heading the Russian side of the intergovernmental commission with Syria, said that the Russia-Syria projects under discussion “also relate to the period that, we hope, will follow the war. This is the post-war reconstruction, post-war regulation of the economy.”

But when will the “post-war reconstruction” come? What is the vision for the country's future? Is it possible to attain national reconciliation? Unfortunately, these questions are yet unanswered. The UN, on which high hopes were put — especially during the first stage of envoy Lakhdar Brahimi's activity — is not displaying any noticeable activity in the direction of Syria.

Russian experts believe that despite grave casualties suffered by Syrian government forces, they are still battle ready and of high integrity. Here, they do not value rumors that follow some resignations and reshuffling in the Syrian leadership such as the dismissal of Assad's maternal cousin, Col. Hafez Makhlouf, brother of the leading Syrian businessman Rami Makhlouf. Until early October, he headed general intelligence for the city and province of Damascus. He also happened to be one of the closest friends and associates of Basel, Assad's late brother, whose father was preparing to become his successor before he perished in a car accident (under circumstances not yet clarified) in 1994, and was one of a few survivors of that fatality. He used to be the chief of all special services in the area under his supervision, ensuring security in the capital and closest suburbs. There always were rumors spread about him, in particular that he was either killed (this was not confirmed) or wounded during the explosion at the headquarters of the National Security Council in Damascus.

In September of this year, sources from the Syrian opposition and some Western experts claimed that Assad dismissed Hafez from his position and placed him under house arrest. But the official Syrian media reported that there had been merely a routine personnel shuffle. One informed Syrian source who wished to remain anonymous believed that the reason for this reshuffling could be both discontent with Hafez's activity among the Alawites and his allegedly too close rapprochement with the leadership of Iran's Islamic Revolutionary Guard Corps. Later, Arab and foreign experts reported that he had left Syria and traveled via Kiev to Minsk, where he remains. They base this position on the allegedly great business interests of the Makhloufs in Ukraine and Belarus. According to other sources, though, Hafez is still in his Damascus home.

According to Russian analysts, representatives of the foreign-based Syrian opposition, counting on the rift in the higher Syrian administration and the Alawite community, are stirring up the story of the colonel's dismissal. This action says less about Assad's weakening than about his ability to keep the situation under control. In Moscow, there is not much interest in this story, which has had not even the least influence on the formation of its policy toward Syria.