Russia is standing by Syria, including its elections, and warning the United States and other members of the UN Security Council against the perils of "external intervention." 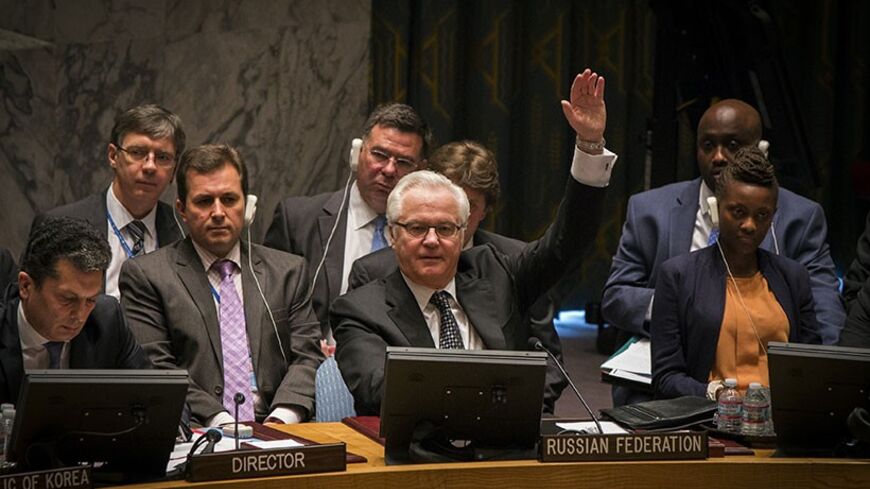 Russia's UN Ambassador Vitaly Churkin votes in the UN Security Council in New York against referring the Syrian crisis to the International Criminal Court for investigation of possible war crimes, May 22, 2014. - REUTERS/Lucas Jackson

The sharp deterioration in relations between Russia and the United States has not prevented them from continuing their cooperation on issues such as the destruction of chemical weapons in Syria, the holding of the P5+1 (the five permanent UN Security Council members plus Germany) negotiations with Iran or the preservation of stability in Afghanistan. Disagreements over the Syrian crisis, however, are clearly showing signs of worsening. Russian analysts fear that, once the process of removal of the Syrian chemical arsenal is concluded, the United States — which has not renounced the idea of ​​overthrowing the regime in Syria — may revert to the plan of a military strike against the country.

It's precisely this plan that ​​Moscow has seen in the recent UN Security Council draft resolution, which it vetoed, together with China. Speaking on May 23 at the conference on international security — held in Moscow by Russia’s Ministry of Defense and in which I participated as part of a group of Russian and foreign experts — Russian Foreign Minister Sergey Lavrov said, "Just yesterday, our Western partners in the UN Security Council put to the vote a draft resolution that, with reference to the humanitarian crisis in Syria, suggested that the whole situation come under Chapter 7 of the UN Charter. In fact, this would be the first step to justify external intervention: there is no doubt about that. Knowing full well how fraught with danger that is, Russia and China vetoed the resolution, which didn’t pass."

The main topics of discussion at the conference were the spreading of the "color revolutions," the consequences of the Arab Spring and the prospects of preserving stability in Afghanistan.

In the parts of Lavrov’s speech devoted to Syria, two positions elicit specific attention. First, speaking of Russia’s support for the resumption of the Geneva process, the minister stressed the need to prioritize "an end to violence and the fight against terrorism," declaring, "When discussing the transition period we should go about finding a compromise based on mutual agreement, rather than issuing ultimatums demanding a change of regime." Second, instead of using the humanitarian crisis or other aspects of the conflict to justify military intervention, "it is necessary to truly ensure the representative character of the delegation of opposition groups."

In a balanced speech at the conference, Deputy Minister of Foreign Affairs and Special Envoy for the Middle East Mikhail Bogdanov voiced the particularly important thesis, in my view, of supporting the practice of "local pacifications in Syria as an important prologue to a subsequent comprehensive cease-fire." In this regard, Bogdanov emphasized the role of Russian diplomacy in the success of this process — in particular, in the city of Homs in February. Note that Lakhdar Brahimi’s assessment of "local pacifications" somewhat differs from that of the Russians. Specifically, the former mediator declared: "It is part of the continuing war, it is not the beginning of a peaceful process."

Reiterating the idea of ​​the necessity of making the opposition delegation in Geneva more representative, Bogdanov expressed the hope that "the Syrian opposition be seriously focused on a political solution, rather than on endless requests to its external sponsors for the supply of ever more lethal weapons." It is indicative that the deputy minister confirmed the importance to Russia of the fate of Christians in Syria and throughout the Middle East. He mentioned that, before the outbreak of the civil war, approximately 2 million Christians lived in Syria, yet already half a million had been forced to leave their homes and many of the country's temples had been destroyed or damaged. In his words, "Russia is undertaking a complex and diverse work to improve the situation of Christians in the Middle East and North Africa."

Bogdanov criticized the influential media in which the Syrian crisis "is presented as the struggle for democracy of the Sunni majority against the Alawite minority." In reality, he noted, "In Syria, groups associated with al-Qaeda such as Jabhat al-Nusra, the Islamic State of Iraq and the Levant [ISIL] and others are operating," and it is precisely because of these extremists that the timeline for the delivery of humanitarian aid as well as for the evacuation of the chemical weapons stockpile has been disrupted. A very important point in Bogdanov’s speech, in my opinion, was his taking a stand on the upcoming June 3 presidential elections in Syria. He stated that Russia is drawing a line here, "starting from the contention of the need to preserve Syrian state institutions."

Russian Deputy Prime Minister Dmitry Rogozin, who has just visited Damascus, spoke in even clearer terms. To date, he is the most senior representative of the Russian government to visit the country during the civil war. During his visit on May 24, he declared, "Russia has no doubts about the legitimacy of the elections in Syria." In this matter, the difference in position between Russia and the United States is particularly stark, as it is well-known that the US administration considers these elections "a farce."

It is symbolic that Rogozin, appointed head of the Russian side of the intergovernmental commission on socioeconomic and scientific-technical cooperation between Russia and Syria, visited Syria just a few days before the elections. At a meeting with Syrian President Bashar al-Assad, he stated that "not only the development of the constitutional process in Syria, but also the success of finding a peaceful settlement in the Middle East depend" on the elections. Rogozin did not refrain from mentioning the thesis about "the color revolutions," either.

Some experts have questioned whether too expansive a use of the notion — albeit only by some representatives of the Russian establishment — of "exporting the color revolutions," which includes also the Arab East, will harm Moscow's relations with the new authorities of such states as Tunisia, Egypt and Yemen. These are very friendly and important relations, especially in the case of Egypt, where there has been a real breakthrough. The upcoming presidential elections in Egypt will lead, however, to the unconditional legitimation of the military that ousted elected President Mohammed Morsi, as he had quickly lost the people’s confidence. Many Russian officials and analysts emphasize the difference between the above-mentioned countries of the Arab Spring, where the change of government — albeit formally illegitimate — was the result of internal processes, and those countries where it came about as a consequence of a clear external intervention (the most striking example being Libya). Bogdanov again presented a rather balanced assessment during this conference, in which he emphasized that, in the initial phase of events in Egypt and Tunisia, there were no political forces leading the revolution, while "the modern media, the Internet and social networks played a big role. In light of this, it cannot be excluded that some influential international players and transnational power centers contributed to the adverse development of events."

At the meeting with Rogozin, Assad said that Russia, "by vetoing the UN Security Council resolution for the fourth time, had saved not only Syria but the entire Middle East, while maintaining stability in the world and stopping Western hegemony."

By strengthening ties with Damascus, Moscow has not lessened its contacts with the opposition and is actively working on the resumption of the Geneva talks. Obviously, for Russian diplomacy it would be desirable to include within the negotiations different internal opposition groups outside the National Coalition for Syrian Revolutionary and Opposition Forces, for example the Kurds. A number of groups, which are regarded by the leaders of the National Coalition as "in the government’s pocket," are not really so and do not even support some of the Syrian government’s most significant initiatives. According to Syrian sources, a senior member of the "Popular Front for Change and Liberation" (PFCL) and the "Coalition of Forces for Peaceful Change," namely former Deputy Prime Minister Qadri Jamil, would rather see Assad extend his term, as allowed by the Syrian constitution, instead of holding presidential elections.

On May 26 Lavrov received a PFCL delegation and spoke in favor of "consolidating all patriotic forces of the Syrian Arab Republic on a platform of broad national dialogue and countering terrorism and extremism."