Russia may have designs on Iran's trade with Syria

Observers wonder whether Russia will cut into Iran's trade volume with Syria. 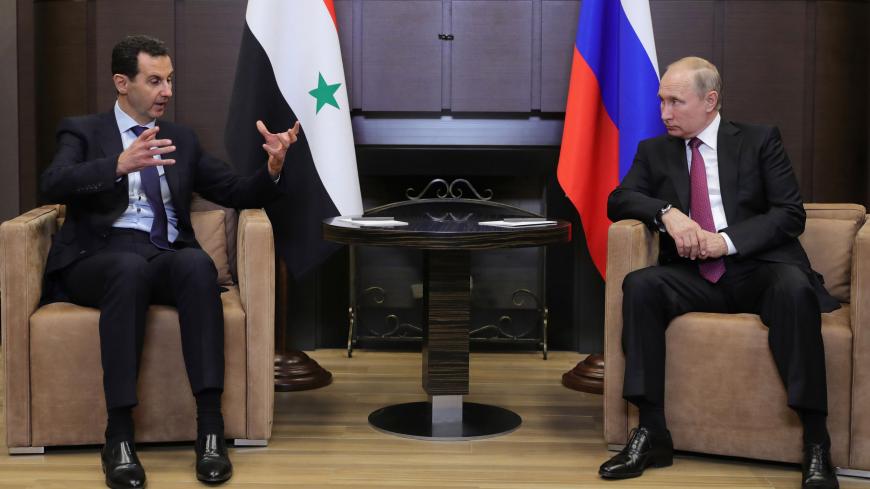 When Russian Deputy Prime Minister Yuri Borisov paid a visit recently to Damascus to meet with Syrian President Bashar al-Assad, the trip fueled speculation about Russia's future trade role in Syria and whether it might challenge Iran’s dominance.

Borisov is also co-chair of the Russian-Syrian Commission on Trade, Economic, Scientific and Technical Cooperation.

The April 20 visit also spurred more talk about a recent agreement under which Russia is to lease Syria's Tartus port for 49 years. Facing its worst fuel crisis since 2011 as a result of US sanctions, Damascus is looking to diversify oil supplies previously provided by Tehran — and now currently put on hold — with fresh proposals from Russia. Such plans are ambitious given the current status of Russian-Syrian trade.

According to the latest data collected by the Russian Foreign Trade website, based on information from the Federal Customs Service of Russia, in 2018 Russia’s trade with Syria totaled $401.5 million — a 42% rise from 2017. This was far behind Iran (which said in April 2017 that its annual trade with Syria had surpassed $1 billion), Turkey, Saudi Arabia, Iraq, Lebanon, Jordan and China.

The main category of product Russia imported from Syria in 2018 was food and agricultural raw materials at 93% (a slight fall from 95% in 2017), including fruits and nuts.

Both Damascus and Moscow have declared a policy of raising their levels of economic cooperation, military coordination and political dialogue.

The countries in October 2014 signed an agreement to cooperate and provide mutual administrative aid on customs matters. In 2017, two additional agreements were signed between Russia’s Federal Customs Service and Syria's General Department of Customs aimed to create a “green corridor” to speed up customs procedures. In December 2015, the private Adyg-Yurak company in southern Russia inaugurated a project in Latakia, on the Syrian Mediterranean coast, called the Russian Export Village. It sought to ensure supplies of local fruits and vegetables for Russian supermarkets, using a direct shipping line between Latakia and the Russian Black Sea port of Novorossiysk rather than routes with stopovers in Turkey, and the project included construction of sorting and storage facilities in Syria.

Despite interest expressed for Syrian products from 2015-2017 by prominent Russian companies such as the Magnet grocery chain and Food City, the Russian Export Village faced challenges, resulting from the deficit of high-quality fruits and vegetables in wartime Syria, the high cost of transporting small shipments, along with the still largely unresolved issue of calculating the customs value of Syrian agricultural products that enter Russia. As a result, in 2018, Russia's imports of Syrian vegetables stood at $440,000 (compared with $412 million from China, $225 million from Azerbaijan, $178 million from Israel, and $171 million from Egypt). A similar situation emerged with fruits and nuts when Syrian exports to Russia, equivalent to $2.8 million, turned out to be far less than imports from Ecuador ($1.1 billion), Turkey ($792 million), China ($422 million), Azerbaijan ($264 million) and South Africa ($231 million).

Some Arab participants — at the Arabia-Expo exhibition, held April 8-10 in Moscow and the Yalta International Economic Forum convened April 18-20 in Crimea — who spoke not for attribution said Russian efforts to ensure trade preferences for Syria might depend on Damascus’ willingness to develop economic ties with Crimea. These ideas have been mulled over for a while. In particular, Syria and Crimea are considering creation of a joint trading house and joint shipping company for trading Crimean wheat, metal and electric equipment for Syrian fruit, vegetables, nuts and phosphates.

Interestingly, Belarus may become a competitor for Russia’s own trade with Syria, despite rather moderate trade turnover. In 2017, Belarusian exports to Syria were worth $6.3 million, while Syrian exports to Belarus of $7.4 million significantly exceeded exports to Russia, worth $2.9 million.

According to the Belarusian Chamber of Commerce and Industry, trade with Syria reached $50 million in 2018. Minsk Automobile Plant and Minsk Tractor Works have been trying to compete with heavy-truck maker Kamaz, Concern Tractor Plants and other Russian manufacturers in gaining access to Syrian markets. At the same time, Belarus is looking for sales in Lebanon in collaboration with Syria's Sakkal & Sons Co.

As for Ukraine, its trade with Syrian before the war began in 2011 slightly exceeded Russian-Syrian trade. According to World Integrated Trade Solution, in 2010 Ukrainian exports to Syria reached $1.13 billion compared with Russian exports to Syria of $1.11 billion. Trade between the governments of Ukraine and Syria dropped to nothing with Kiev’s decision to join the EU sanctions on Syria in June 2014 and the anti-Damascus position at the UN. But as opposed to their government, Ukrainian businesses kept up exports to Syria, mostly of soft wheat, metal products and feed corn, sometimes outpacing Russian competitors at dumping prices. Ukraine reported 2017 exports to Syria of $8.62 million,

In sum, despite positive signs for both Moscow and Damascus, it seems too early to predict any dramatic increase in bilateral trade between Russia and Syria at the expense of Iran, while the use of the Tartus port under Russia’s lease could be largely limited to exports of Syrian phosphates and other products, not only to Russia itself, but also to third countries.