How Russia could facilitate China’s role in rebuilding Syria

Moscow and Beijing are eyeing a number of opportunities to push forward on the reconstruction of Syria and Lebanon could play a central role. 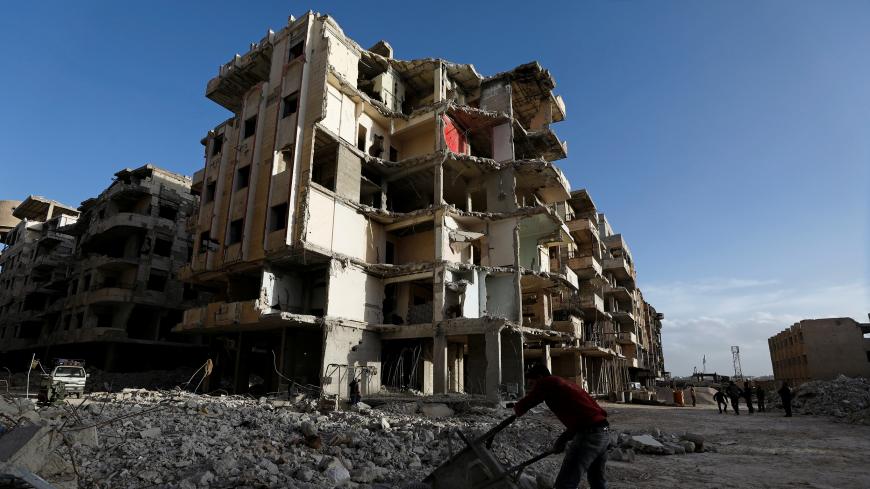 When Chinese President Xi Jinping traveled to Russia in early June, he and his Russian counterpart Vladimir Putin signed joint statements addressing everything from protecting giant pandas to partnering in e-commerce.

During the state visit, they also discussed providing assistance for Syria’s recovery, something they have both been investigating for some time. Beijing has employed a “haste makes waste” approach, feeling comfortable taking one step at a time.

But shortly after their meeting, Syrian Foreign Minister Walid Al-Muallem visited China with a view toward paving the way for more active participation by Beijing in Syria’s economic reconstruction, which is currently expected to cost $350 billion. Muallem’s trip also sought to promote Syrian President Bashar al-Assad’s “Look East” — or away from the West — foreign policy strategy that calls for closer engagement with major Asian powers.

Since 2018, the Mediterranean port of Tripoli in northern Lebanon — which is just 32 miles (51 kilometers) south of Syria’s port of Tartus — has been emerging as a central destination for regular shipments from China to the Levant. Along with Tartus and Syria’s port of Latakia, which is 69 miles (111 kilometers) north, Tripoli constitutes an important logistical gate to Syria, Jordan and even to western Iraq through the Homs corridor and other Syrian land routes.

Lebanon’s proximity to the instability in Syria occasionally sparks debates over Lebanon’s ability to attract big Chinese investments to Tripoli as the top hub for Syria’s reconstruction. In August 2017, Tripoli port manager Ahmad Tamer predicted that given Syria’s need to move 30 million tons of cargo annually and with Latakia and Tartus together only handling some 10-15 million tons, Tripoli might get the rest of the shipping business.

In reality the picture is more nuanced, as Tripoli has both pros and cons compared with Syrian ports. Its biggest advantage, though not much publicized, has to do with US trade, travel and financial sanctions against Syria. Accessing Syrian ports poses risks for reputable international maritime companies.

France’s giant CMA CGM container shipping company, which has an operation in Latakia, opened a shipping line between China and Tripoli in October 2018. Other shipping giants that deliver huge amounts of Chinese freights to the Levant — such as Denmark-based Maersk and Switzerland’s MSC, which have offices in Beirut — deal with Syria through local partners in Lebanon such as Gezairi Transport, Lotus Shipping Agencies and others.

Due to Iran’s recent lease of Latakia and Russia's of Tartus, Tripoli’s importance may soon increase as the third base point for Syria’s reconstruction under China’s lead. China Ocean Shipping Co. has been using Tripoli for its operations, but accesses Latakia through Lotus Shipping.

Tripoli’s disadvantages, however, include the absence of modern highways between northern Lebanon and Syria’s Tartus and Homs provinces and a lack of railways in Lebanon, although the Tartus-Homs railway line passes through the country. This situation hampers prospects for a full-scale incorporation of Lebanon’s transportation infrastructure into the Chinese Belt and Road Initiative or into Syrian-Iranian plans to build a rail line between Latakia and Tehran.

Amid Russia’s ambitions to modernize Syria’s railroads, Beijing will most likely need Moscow’s political support and technical assistance to establish railway connections between Tripoli and Syria. China may also turn to Russia to develop the port of Tripoli, given Russian oil company Rosneft’s agreement with Lebanon for operational management of the local oil products storage terminal for 20 years.

Yet unlike Russia and Iran, China’s major challenge in Syria’s reconstruction is its preoccupation with sanctions on Syria. China’s deeper involvement in international economy and trade also explains Beijing’s reluctance to invest in Syria.

A Chinese diplomat in Damascus who spoke with Al-Monitor not for attribution stressed this factor while describing Hong Kong banks’ unwillingness to sponsor Syria despite the 2017 creation of a working group that included representatives from the Syrian Embassy in China, the China-Arab Exchange Association and the Beijing-based Shijing law firm.

The group was to collect all available data about prospects for Syria’s recovery rather than working on commercial projects. Some Chinese companies did accept contracts in Tripoli — including one of $58 million for the wharf, plus installing six cranes capable of lifting 700 containers per day — but then didn’t provide any apparent additional investment.

At the same time, China succeeded in creating long-term positions in the Lebanese banking community with a view to participate in rebuilding Syria bypassing sanctions. Fransabank, a first-tier local bank, became known as a pioneer Lebanese bank in terms of cooperating with numerous Chinese banking partners. On March 30, it organized the China-Lebanon Investment Forum in Beirut together with the China Council for the Promotion of International Trade.

Some distinguished Chinese corporations that are involved in hundreds of projects around the world — including in Hong Kong and the United States — in the fields of scientific research, industrial engineering, construction, solar energy and international trade have probed the possibility of working in Syria under Russia’s cover.

These companies have taken preliminary steps exclusively in the business-to-business format, using their business partners’ mediation in the Middle East and inside Russia. It appears they haven’t received any concrete feedback from the Russian side so far.

In sum, Beijing faces both economic opportunities and challenges in Syria. Much will depend on how Syria figures into the Chinese political leadership’s future regional strategies. But in any case, China will need to consider diplomatic arrangements and partnerships with Russia and Iran, the two leaders in political-military presence on Syrian soil, while testing Lebanon’s waters.