Can Russia, Iran, China agree on division of roles in Syria reconstruction?

Moscow, Tehran and Beijing are all vying for a piece of the Syrian reconstruction business, but will they be able to divide their interests civilly, or are they doomed to rivalry? 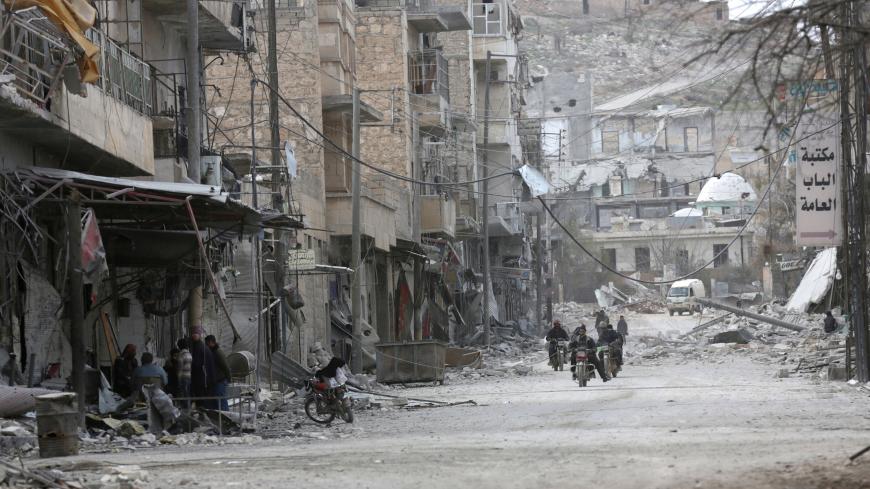 People ride motorcycles amid the rubble of damaged buildings in the northern Syrian town of al-Bab, Syria, Feb. 28, 2017. - REUTERS/Khalil Ashawi

Syrian Minister of Transport Ali Hammoud met with Chinese Ambassador to Syria Qi Qianjin in Damascus on April 10. Hammoud stressed the importance of his country’s incorporation into Beijing’s One Belt, One Road initiative — an ambitious plan to recreate the modern-day analogue of the Silk Road. Hammoud invited Chinese investors to participate in commercial projects on Syrian soil, including the City of Marine Industries, to be established on the coast between Latakia and Tartus; the development of international transport routes; and the launch of railroad projects in rural Damascus.

Syrian President Bashar al-Assad paid his own visit to Tehran Feb. 25 to meet with Supreme Leader Ali Khamenei and President Hassan Rouhani. The visit occurred in light of intensified exchanges between Iranian and Syrian business delegations, and expert discussions about Iran’s claims to a predominant role in Syria’s reconstruction.

Meanwhile, Russia will host the 5th Yalta International Economic Forum from April 17 to 20. Syria has been made an honorary member of the forum following the mutual cooperation agreement signed by the Republic of Crimea and Syria last year. SANA news agency and Syria TV are considered the informational partners of the forum.

According to Asia Times, Russia intends to stay on in Syria as the sole foreign military power along the Mediterranean coast, given its air base in Khmeimim and its invitation from Damascus to modernize a Soviet-age naval base in Tartus. But the Iranians also have an eye on the coast. They have had a partial lease of the Latakia port since October 2018. Although Iran is officially permitted to use the harbor only for economic purposes, this new reality concerns Moscow, which foresees risks to its own forces, who may be subject to incidental attacks on Iranian proxies by Israel or even the United States.

“Everyone wants a Silk Road nowadays, and ports are a good place to start,” Landis told Asia Times, referring to Tehran’s dream of selling oil and gas to Europe via Iraqi and Syrian transport corridors.

Sinan Hatahet, a senior fellow at the Omran Center for Strategic Studies, said Moscow and Tehran are competing for access to the Syrian economy, with a particular focus on reconstruction contracts.

“In addition to lines of credit and supply of vital strategic products, Russia and Iran are pursuing a larger role in the Syrian economy by agreeing investment contracts for their major companies and conglomerates," the analyst argued at Chatham House. "Moscow and Tehran seek partial compensation for their military interventions in Syria, and both adopt an opportunity-based approach to the Syrian market."

If analyzed through the prism of SWOT methodology — strengths, weaknesses, opportunities and threats — Iran, Russia and China face unique challenges in terms of their economic presence in Syria.

Since 2012, Iranian troops, together with the Islamic Revolutionary Guard Corps and Hezbollah, have played a decisive military role on the ground. This created a pro-Iranian faction in the Syrian army and the national security conglomerate. Iran’s status as a key sponsor — assigning credit lines worth $7.6 billion from 2013-2017, supplemented by monthly supplies of oil products — enhanced Tehran-oriented groups in the Syrian government and among state-affiliated entrepreneurs.

Russia has facilitated its own factions within the Syrian military and intelligence since September 2015, both through its military campaign and alleged subsidizing of some elite Syrian regiments. In 2014, Moscow sent ad hoc financial aid to civil servants, later supplemented by humanitarian supplies of wheat. Stroytransgaz, a well-wired company involved in Syrian projects prior to and during the crisis, consolidated its sympathizers in local government and business circles.

The Chinese, in turn, have worked to shape influential relations with different government structures and local public sector companies since the 2000s. Viewing Syria as a hub for accessing Lebanese and Iraqi markets, China focused on projects for bilateral cooperation in oil, gas and electricity. The positions secured at the time by Beijing may now be backed up with much bigger financial and industrial potential, in comparison with Tehran or Moscow.

The weaknesses of the respective parties are even more remarkable. Attempts by Iran to ensure a dominant role, while fashioning its own economic aid as a long-term investment, not charity, have split Syria’s political, military and business elites. Tensions occurred, by and large, along two lines: between secular and religious-minded Syrians, including the Alawites; and between war-time entrepreneurs who benefit from Iranian projects and their rivals, traditionally parties aligned with Qatar, Saudi Arabia, other Arab Gulf monarchies, Lebanon and the West.

Russian businesses also faced challenges in financing projects in Syria. Given Russia’s stronger links with the global economy than those of Iran, a major challenge is the anti-Syrian and anti-Russian sanctions. These difficulties are further compacted by the deficit of positive practical experiences between the private sectors of both countries, along with corruption and excess bureaucracy in Syria.

China’s weaknesses are embodied by its nonexistent positions among the Syrian military. Also, Hong Kong banks seem reluctant to finance direct investments in Syria’s reconstruction over fear of US sanctions.

Nevertheless, all three powers see some interesting opportunities for themselves. Iran dreams of creating a strategic bridge to Hezbollah in Lebanon, as well as a historic chance for merchants and industrialists to acquire exclusive access to Syrian markets.

Russia seeks compensation for its military spending on the war through the extraction of oil, gas, phosphates and other mineral resources, with an eye toward future profits from the modernization of transport infrastructure.

China is determined to increase Syria’s dependence on Beijing in terms of critical infrastructure, such as the energy sector, in turn undermining Japan and Germany. It also craves unlimited access to vast markets for the consumption of its goods. At the same time, the Chinese want to carry out selective projects aimed at ensuring the localization of industries, like car production.

Finally, in terms of threats, the Iranian presence has already put Syrian authorities at risk of attack by Israel — a concern Moscow feels it needs to act on. Beijing risks losing big investments if Assad steps down and Syria's traditional business partners (Japan, Korea and the EU) reemerge.

In sum, amid widespread speculations about growing economic rivalries between Iran, Russia and China in Syria, Moscow and Tehran are seeking to divide their spheres of interests and build government-to-government, government-to-business and business-to-business relationships with Syrian partners. While the Russians are more focused on mineral resources, transport infrastructure and the production of fertilizers, the Iranians prioritize trade, real estate and the agricultural and construction sectors. The Chinese, for their part, still limit their efforts to the electricity sector and some manufacturing industries.