The business of war: Egypt, others eye reconstruction bids

Despite lingering security concerns, Egypt is seeking a substantial, lucrative role in rebuilding Syria and Iraq. 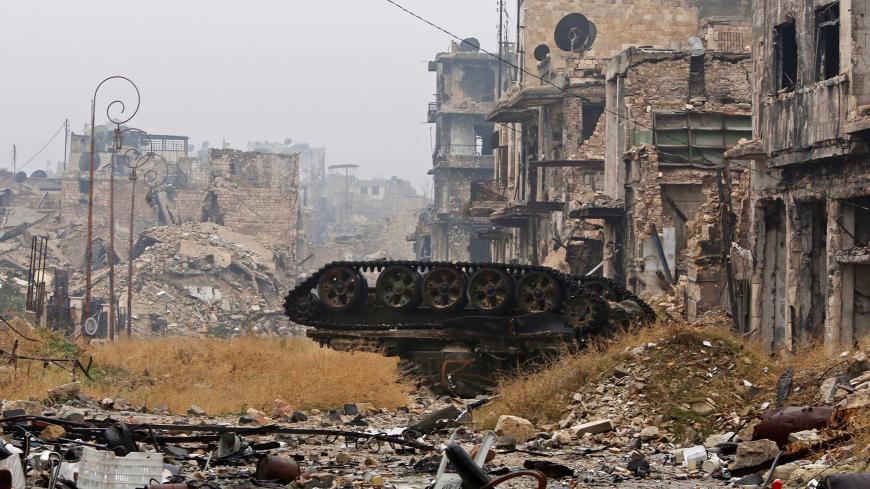 A damaged tank is pictured amid the destruction near the Umayyad Mosque in the government-controlled area of Aleppo, Syria, Dec. 13, 2016. - REUTERS/Omar Sanadiki

CAIRO — The Syrian regime has intensified its call for investors to help rebuild the country, and Egypt is answering. For five months, Syrian officials have met with Egyptian, Chinese, Indian, Russian and Omani investors. Iranian investors and European companies have also expressed interest.

It appears Egypt will be involved in rebuilding both Syria and Iraq. Habib al-Sadr, Iraq’s ambassador in Cairo, announced during his Sept. 2 interview with al-Wafd daily that Egypt will play a significant role in Iraq's recovery process. This followed a Sept. 1 announcement by Haidar al-Nuri, the commercial attache at the Iraqi Embassy in Cairo, of 76 investment opportunities for Egyptian businesses in Iraq.

Egypt had already made a pitch for its public and private sectors to participate in Syria's reconstruction. On Aug. 17, Syrian Deputy Prime Minister Walid Moallem received a delegation from the Federation of Egyptian Chambers of Commerce, headed by Chairman Ahmed al-Wakil. Moallem praised the relationship between Egypt and Syria in his interview with Syria’s state news agency, SANA. “There is a sincere desire to enhance bilateral relations between the two countries,” he said.

Ahmed Aboul Gheit, the secretary-general of the League of Arab States, estimated in April that reconstruction costs in Syria will amount to $900 billion, while Iraq's costs recently were projected to reach as much as $150 billion. That amount of work will provide substantial investment opportunities that can generate huge profits.

Building trade will also be part of the recovery process. Egyptian Minister of Trade and Industry Tarek Kabil met Aug. 24 with Iraqi Minister of Planning and Trade Salman al-Jumaili to discuss facilitating trade. The ministers agreed that trade operations between Egypt and Iraq will go through Jordan, in light of the terrorist threats facing Iraqi airport roads. The officials also agreed to intensify Egypt's participation in product exhibitions in Iraq and discussed ways to support Egyptian products in Iraq by reducing taxes and customs on such products.

Egypt has a duty to help Arab countries and peoples, and that duty serves two purposes, said Faraj Abdel Fattah, an economics professor at Al-Azhar University.

“The first allows Egyptian businessmen to start new industrial and service-related investments in the two countries. Thus Egyptians should take part in projects that meet the Egyptian market's needs for imports at reduced prices, such as cotton from Syria. They could also venture into projects that create job opportunities for Egyptians or that require Egyptian products such as cement, which is heavily exported by Egypt to Iraq," he told Al-Monitor.

“The second purpose is commercial and sets the stage for a bigger demand for Egyptian exports in a bid to satisfy the needs of the Syrian and Iraqi markets. These gains can only be achieved through a well-thought-out strategy that the Egyptian government has to develop in coordination with Syrian, Iraqi and Egyptian investors, as well as the Syrian and Iraqi governments,” he said.

One critical and complex step in the reconstruction process is ensuring the areas are secure, noted Anwar al-Saherjati, the former head of the Egyptian Commercial Service (ECS) office in Damascus.

“The ECS office is closed due to the security situation [in Syria]," he told Al-Monitor. "The issue is not as simple as the government, businessmen and economists think it is. There is a need for a thorough examination of the security situation and the security risks threatening the Syrian and Iraqi areas that Egyptians intend to invest in. The conflict may have decreased in severity, but it is not over yet.”

Khaled Okasha, the head of the National Center for Security Studies, was somewhat more optimistic.

“There is definitely a need to examine the security situation, but it looks very promising in Syria and Iraq so long as no investments are made in areas that are still witnessing battles, such as Raqqa, Idlib and Deir ez-Zor in Syria or Ayadiyah and Salahuddin in Iraq. Terrorist attacks may take place in some investment areas, but this does not necessarily infer a lack of security, nor does it mean that the said areas are flashpoints. Such incidents can happen in any country," he told Al-Monitor, pointing to the success achieved by the Damascus International Fair despite an Aug. 20 attack there. Six people were killed when a mortar bomb fell near one of the exhibit's entrance gates.

Fathi Abu Zeid, a member of the Egyptian People's Committee for Solidarity with Syria, told Al-Monitor, “Egypt’s participation in the Damascus Fair reflected the importance of Egyptian products for the Syrian market. The Egyptian pavilion was the most successful among 44 foreign pavilions that included [those of] Russia, Iran and China, as it managed to attract 800,000 visitors on the first day of the fair due to the high quality and competitive prices of Egyptian products.”

On a related note, the Egyptian Furniture Export Council announced Aug. 16 that many Egyptian exporters intend to participate in the Baghdad International Fair scheduled for October.

Council leader Said Ahmad told Al-Monitor, “Egypt is seeking to restore the markets it lost due to the wars in the region. Before 2003, Egypt's exports to Iraq amounted to more than $2 billion, compared with $781 million at the moment, so the reconstruction process is a great opportunity for Egypt to regain those markets.”

In addition to economic gains, Sisi hopes to expand Egypt's foreign political influence. Such was his goal when he traveled to Africa in August, an effort that led Chad to exempt Egyptian businessmen from entry visas.