Moscow and Beirut each see potential benefits in working together to secure lucrative reconstruction contracts in Syria. 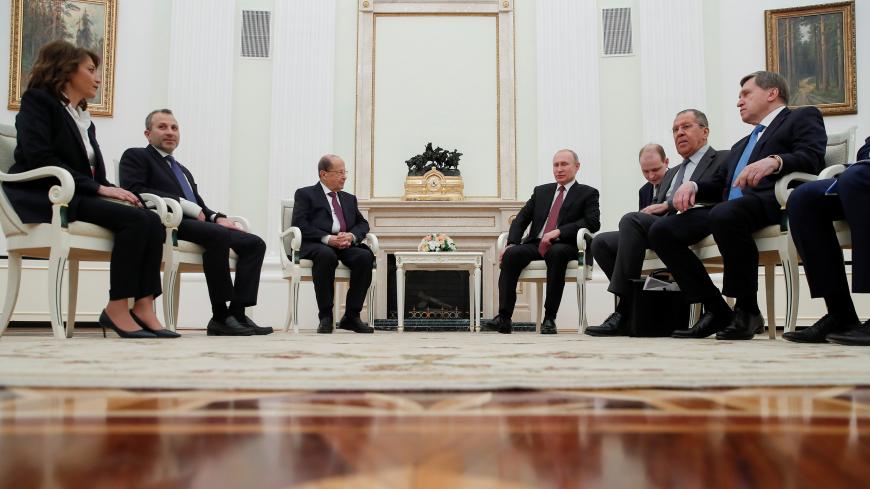 It seemed that, in addition to the Syrian refugee issue — on which Russia and Lebanon have worked together for some time — Beirut was interested in gaining economic dividends from Russia's influence in Syria.

As far as Lebanese politics are concerned, Russia has worked to establish an image as a neutral player — unlike Iran, which supports Hezbollah and many local Shiite Muslims; Saudi Arabia, which backs up Lebanese Prime Minister Saad Hariri and Sunni Muslims; and Western European powers that favor Aoun and the Christians.

Russia has sought to monetize that perception by entering Lebanon’s energy market. Russia’s private Novatek company is part of a consortium with France’s Total and Italy’s ENI for drilling oil on the eastern Mediterranean shelf, while Russia’s state-owned Rosneft holds a 20-year license to modernize an oil storage facility in Lebanon's seaport of Tripoli. In return, Lebanese authorities may ask for Russia’s political assistance in getting access to lucrative reconstruction contracts in Syria.

At first glance, Lebanon’s present economic ties with Syria seem to be on the rise. According to the Observatory of Economic Complexity, in 2017 Lebanon was the top destination for Syrian exports ($131 million), and the No. 3 source of imports ($246 million). Lately, the Lebanese have been sending delegations to various exhibitions in Syria, including the back-to-back Damascus International Fair and the Rebuild Syria exhibition last year in September, and have cultivated business-to-business contacts.

In parallel with Russia, Lebanon is seeking common ground with other potentially important economic players in Syria. For instance, Beirut is trying to attract large-scale investments from China into Tripoli, which is positioned by Beirut as a hub for Syria’s reconstruction. No wonder that in private conversations with Russian counterparts Lebanese businessmen and bankers often call Lebanon a “bridge” to Syria’s economic recovery.

However, in Syria, the Lebanese face a challenge of being left far behind Iran, Russia, China and even Arab Gulf states, due to the traditional complexity of bilateral political relations with Damascus, which sees Beirut as a junior partner. Besides, for some Lebanese entrepreneurs, doing business in Syria is a virtual taboo — especially to Sunnis close to the Hariri family, which has opposed Syrian President Bashar al-Assad since the beginning of the Syrian crisis. For them, joint projects with Moscow — for instance, those blessed by Russian-Saudi consent — can constitute a profitable solution.

In turn, Russian businesses, especially midsize companies, may also be interested in collaboration with Lebanese partners. A top-level Syrian consultant, who spoke to Al-Monitor on condition of anonymity, outlined the following advantages of doing business in Syria via Lebanon, instead of directly:

Another official working in the Middle East for an authoritative international audit company agreed to speak with Al-Monitor not for attribution. The official believes conducting entrepreneurial activities in Syria through Lebanon makes sense compared with other options like the traditional Russian pattern of opening offices in Dubai. The official noted several factors that favor doing business via Lebanon.

First, Syria and Lebanon share a border. Second, lower arbitration costs make Beirut attractive as a foreign jurisdiction compared with, for example, the Dubai International Arbitration Center. Third, there's a long record of successful joint projects and family partnerships between Syria and Lebanon, often based on marriage. Though, as stated earlier, some Lebanese avoid doing business with Syria because of Assad, many Syrian merchants and industrialists have obtained Lebanese citizenship. Also, many of Syria’s prominent entrepreneur families either reside in Lebanon or have property there. Fourth, there are sustainable land communications, which during the Syrian crisis became vital for ensuring cash flow to and from sanctioned Syria.

Russia-Lebanon tandem projects for reconstructing Syria can become valuable for Russia in financing economic activities in Syria, as well as for boosting Russian-Syrian bilateral trade. The obvious deficit of means to ensure banking transactions — given Western sanctions against Moscow and Damascus — has become a challenge for Russia, especially after the October 2017 collapse of the legendary Moscow-based Tempbank, which had specialized in operations with Syria and Iran.

According to a 2018 report prepared by a Middle East consulting bureau and largely based on inside information, some elements of which became known to Al-Monitor, the list of top Lebanese banks that deal with Syrian projects, host Syrian deposits and/or have subsidiaries or branches in Syria and so can be used for respective business projects, includes:

Most of the challenges facing Russian businesses working in Lebanon have to do with the strong dependence of both national banks and Lebanon’s own financial system on the United States, as the dollar is officially used along with the Lebanese pound. Thus, it's not by chance that new foreign companies, especially from Russia, that seek work in Lebanon are subject to prior-compliance banking approval. Banks are setting their own buffers for compliance, to avoid US sanctions. It can take more than 45 days for Russian citizens to open bank accounts in Lebanon. And regardless of the Lebanese Banking Secrecy Law promulgated in 1956, which is still in force, local banks make new clients sign special waivers, lifting banking secrecy de facto in favor of the US Office of Foreign Assets Control.

In sum, Russia-Lebanon tandem projects working toward Syria’s reconstruction pose both opportunities and challenges. Their success will depend largely on the development of the political-military and socioeconomic situation inside Syria, as well as the status of strategic power balances around the country.

More from Igor A. Matveev